Happy Friday all. Hope you’re gearing up for the weekend–or maybe you’ve already started? We’re closing out the week here at CSE with a solid update on the week’s highlights and a bit of art to boot. We’ve even got a small behind-the-scenes video link at the end, illustrating a new feature in the animation system. We think Andrew’s test to see if it was working was too amusing not to share. With that said, let’s get to the week’s highlights!

1. WIP – Tech – Improvements to shadows: After fixing a long litany of bugs last week, George is now focusing on shadow bugs and improvements. Shadows have been updated to look better with our improved and expanded draw distance. When this work started, we just had blurry squares around the character showing up on the ground. Now, you can see individual leaves from the trees above and the grass around you with no impact on performance. More improvements still to come!

2. WIP – Tech – Effects playing from animations: Andrew added functionality for frame-specific VFX and SFX events in the animation system. Users of the system (Mike, dB, and Ben) can also specify which bone from which to play an effect (hand vs. foot vs. head, etc.). This is a great example of Design, Art, Audio, and Engineering working together! To test the new functionality, Andrew added a little “pop” to our run animation. Check the video below, but keep your sense of humor in mind! What you see is “working as intended,” but only if you like firecrackers and sparkles. 🙂

3. WIP – Tech – Seamless zone transitions: Colin has the procedurally-placed zone transition triggers working. He is now fine-tuning and solving physics-related problems. With previous seamless zone testing, we had to hand-place triggers on a bridge that stretched between two islands. This work will allow players to seamlessly transition between zones without us having to hand-place the triggers, which is a lot better!

4. WIP – Tech – Item stacking: This started with the question: “When we detect that multiple items have similar characteristics, how do we want to stack them in the UI?” Christina’s recent work has made solving this issue possible. At the same time, she’s also given us a simple versioning system for items, stat caching, and a better setup for subitems. These changes don’t provide any difference that our players will notice in the game right now, but allow us to support features like item history, leaderboards, and progression later on.

5. Tech – Architectural improvements: JB has been hard at work this week, wrapping up some updates that will eventually give us the capability to pre-flight skills more accurately. This will allow us to send more information to the client, which we can then use in the UI and for VFX/SFX. It’s another one of those tasks that doesn’t provide anything ‘sexy’ in the short term, but paves the way for future cool features.

8. WIP – Art – Ability Component VFX and SFX: Work continues steadily for Mike and dB as they use the updated effects tools, tagging system, and animation system to add particles and sounds to abilities. We’re currently working through the archer class components.

9. Art – Environment – Portal Statues: Jon completed the modeling phase of the Arthurian and Viking portal statues this week, and is currently working on material changes to represent Realm ownership. Next week, he’ll be working on the TDD model.

10. Art – Dock models: Work continued this week on the library of dock assets. Dionne fleshed it out more, adding in new assets such as hanging fish and nets. She also updated the materials of old assets like boxes and barrels to work with the updated PBR renderer. Next, we’ll look into what we can do with mines for Beta 1 in lieu of full “bubble tech,” which is coming later in the Beta process, as planned.

11. Art – SFX – Dock ambience and footsteps: dB created some new ambience tracks we’ve used on the dock assets. It really adds some life to the area! Additionally, he’s using Andrew’s recent changes to begin re-adding footsteps to animations, which will replace the obvious test in the below video.

12. Art – Concept – Resource Nodes: Michelle completed concept art for various resource nodes to be used in Beta 1. From these, you can gather wood, stone, cloth, etc., to fashion your weapons of war as well as your buildings.

As mentioned in today’s stream, we’ve got a lot of changes soon or already landed this week. All in all, another busy week! Let’s move into art! To begin with animation, we have a video of some WIP emotes. These are still in a rough pass state, but because they are so fun, we wanted to show them off a little early, before they get a polish pass and put into the game. These play straight from one clip to another, so they may feel a little abrupt between each emote. Click the image below. 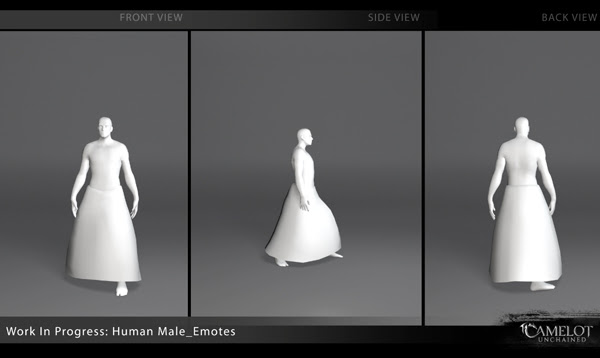 Next up, as mentioned above, we’ve got a progress shot of the dock assets, this time with all the props to make it feel like a working dock. 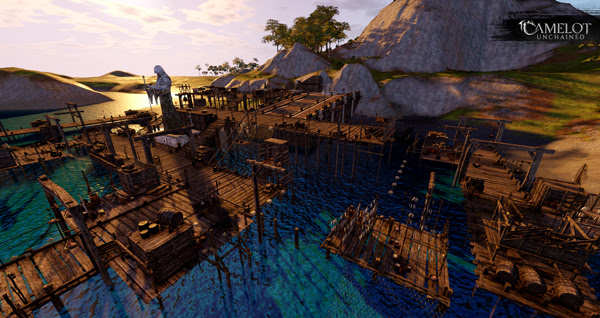 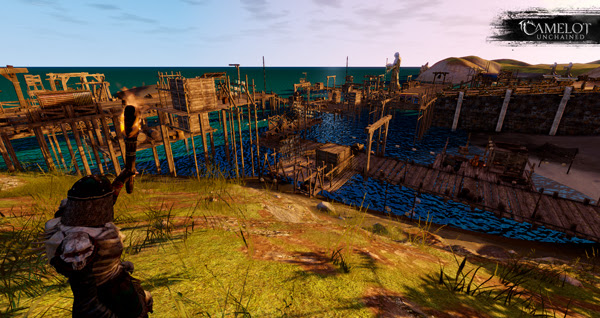 Here we’ve got some of Jon’s work on the portal models for the Arthurians and Vikings. These are markers which will show where you can teleport from one island to another, during testing. 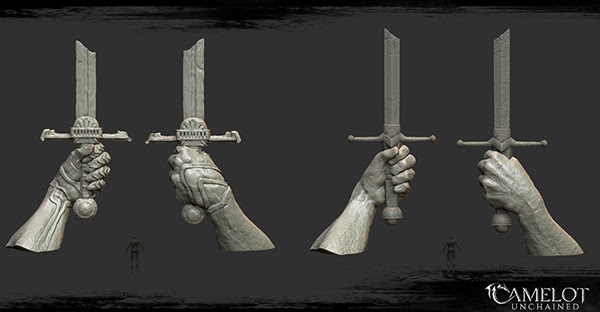 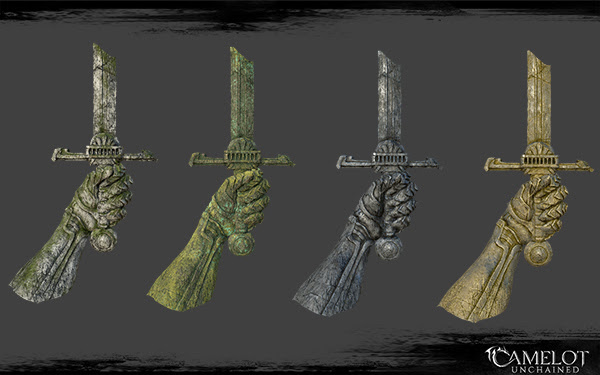 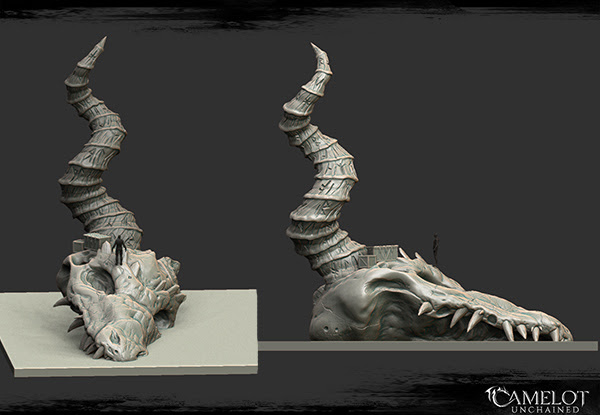 We just had a good conversation about where we’d put the actual portal spot on the skull above. We decided players would need to walk up onto it. Careful attention is being paid not only to the materials going onto it, but also making sure there were some chips and broken pieces to show years of use.

We were going to wait to the TDD portal next week, once Jon had some more time on it, but it’s simply too cool not to show off the rough model concept! Here it is: Michelle found some time to further flesh out the resource node concepts this week, and she livestreamed some of that work. 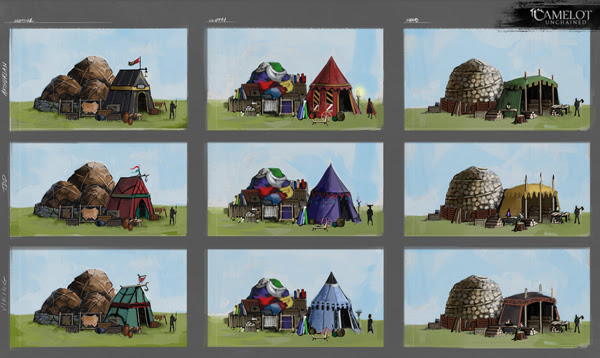 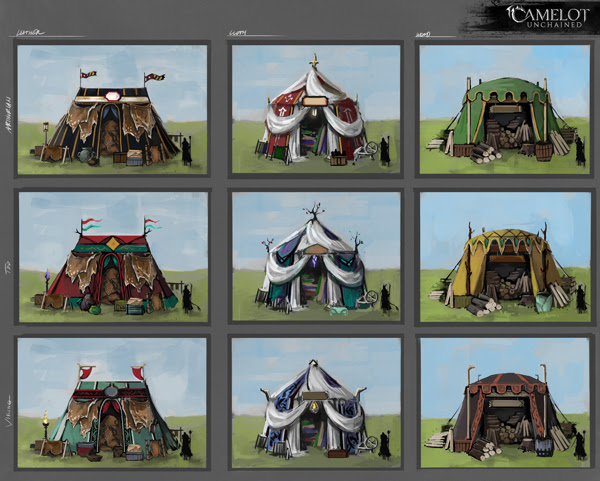 To wrap things up, we have a fun video that illustrates what happens when engineers (Andrew, in this case) add new features to the game. You gotta come up with something fun to test it out! As I referenced above, this video shows a test conducted to see whether the VFX and SFX tagging on the footfalls do indeed work! We won’t, of course, leave it this way (I think dB has already begun adding in real footfall sounds) but it was a fun thing to find in the game. 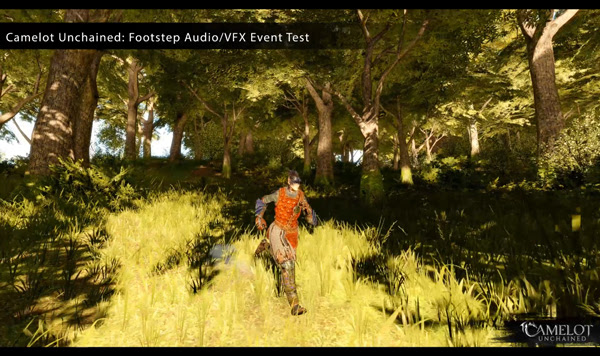 And with that, it’s time to sign off from another week’s update, take a breather over the weekend, and get back to making a great game next week! Hope you all have a great weekend.

Just a note: there’s not a follow up email this week for testing, as we simply have too many things landed or in flight which would make things less-than-stable. CU later!