It has been a hectic couple of weeks here with Dragon Con, a recruiting frenzy, Andrew’s upcoming wedding (next week!) and lots of the usual challenges involved in making an MMORPG with more than a little BSC stuff. Sorry that our streaming schedule has been so light this week, but with Dragon Con, post Dragon Con, interviews, Max’s vacation, it just would have been too difficult. That said, let’s start with Dragon Con.

Labor Day weekend is usually a hot and steamy one anywhere in the southern states and Atlanta is no exception (though it was better than last year). OTOH, aside from that it was a great convention for us. We met a bunch of Camelot Unchained™ Backers, some of whom stopped us on the streets/convention when they saw our new logo/t-shirt. Our Dragon Con panel was full of Backers, players of Dark Age of Camelot/Warhammer, and other interested parties. Unfortunately, we had a glitch with the video, so we don’t have a record of that panel, but fortunately, MJ Guthrie from Massively and Jean from MMO Central were there to cover it, so there will be stories posted about it. As a matter of fact, hot off the presses, here is MJ’s second article on our get together at Dragon Con (http://massivelyop.com/2016/09/09/dragoncon-2016-mark-jacobs-on-camelot-unchaineds-abilities-and-rvr-realm-rewards/). For those who haven’t seen it yet, the first part of the article can be found here (http://massivelyop.com/2016/09/08/dragoncon-2016-mark-jacobs-on-trolls-subscriptions-and-camelot-unchained/).

The panel was great, lots of good questions were asked, swag was given out, etc. I was on three other panels as well as multiple ones with such fun and smart guys like Mike Capps (Epic) and Dan Baker (Oxide) and it’s safe to say a good time was had by all. After those three panels, I’m sure some ears were burning in other parts of the game industry. 🙂  We wrapped up Dragon Con and headed back to the studio on Labor Day and got back to work at the studio the next day. I’m really looking forward to next year there, as it will be even more fun when we can show off another year of evolution on Camelot Unchained. In the meantime, we’ve placed the updated Dragon Con video up on YouTube here (https://youtu.be/y_Gt2IXrRYI).

As to the aforementioned recruiting frenzy, I’ve been spending a lot of time interviewing candidates for CSE. We had an all-day interview here yesterday and Andrew and I had 2 more interviews today. As I’ve been saying forever, we are doing whatever it takes to add even more talented programmers to CSE than we have done to date. Keep your fingers, toes, and wings crossed, maybe we’ll land one or two more before the leaves really start changing here.

Speaking of leaves changing, I hope everybody who is reading this update has had the opportunity to take a sneak peek at the new Autumn Forest Biome in the game. If you haven’t, here is a screenshot (untouched, other than the watermark, as always), from the game. 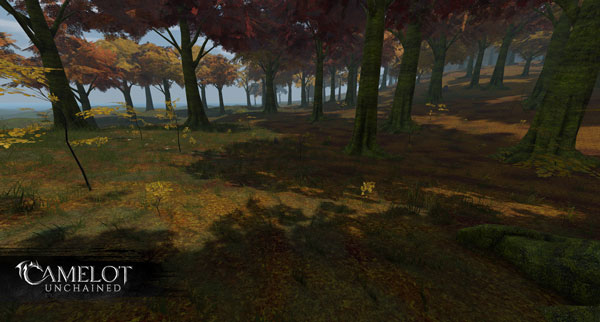 Not bad eh? And just wait, they are going to get even better, sooner, rather than later.

And now, let’s get to what the vast majority of you have been waiting for, the Top Ten’ish List from the past few weeks.

And now for the rest of them. In this update, we can report that we had 31 old cards with 198 completes and 1 New card with 4 completes.

As a Developer, we continually need to update our software.
Improve our crash reporter so it’s easier for other devs to use without support. – Complete
Update Wwise to current version and fix any resulting issues. – Complete

As a Backer, I’d like to see general improvements in C.U.B.E.’s interface and functionality.
Paint Bucket tool in C.U.B.E. uses the normal keybind rules so it can be rebound. – Complete

As a Developer, I’d like to have the tools and knowledge necessary to create terrain Biomes that change with Realm territory control.
Different LODs of terrain segments properly connect, leaving no evident seams between them. – Complete
Determine a solution to more than three overlapping materials per vertex on terrain. (Fix the white seams in the terrain.) – Complete

As a Backer, I’d like to see the sun, moons, and stars in the sky, with sky color changes based on time of day and position of those celestial bodies. – Second Pass
Fix the moon so it’s larger and shows up in the night sky again. – Complete
Night sky and star rotations now synced. – Complete
Moon rotation supports phases. – Complete

As a Backer, I’d like to know about smaller changes that don’t have their own user story.
Improve server startup by asynchronously loading configs. – Complete
Metrics more configurable (to improve server performance) – Complete
Fix issues with ecosystem that were preventing password resets in certain cases. – Complete
Remove an unused logger that was slowing down server startup on debug builds – Complete
WebAPI server properly notifies patcher when a server goes offline. – Complete
Patcher can run in offline mode. – Complete
Add command to build server to shutdown after building but before a new build starts.  – Complete
Multiple bug fixes to audio. – Complete

As a Backer, I want to be able to own a plot of land and build within it. – First Pass
Plot capture and combat states updated to work with changes from re-abilitation. – Complete

As a Developer, I would like more insight into the state of the server.
Improve ease of debugging UserProxy issues by adding a build number to it’s output. – Complete

As a Developer and Backer, I’d like to see improvements in memory usage and threading.
Improve ParLL library based on team usage and crash debugging. – Complete

As a Backer I’d like a patcher to not only update my game, but also give me the most important news and updates, get support, chat with the community and look awesome while doing it!
Create new background video of new title treatment for CU. – Complete
Create SFX and music for new title treatment. – Complete
Add team reveal vid to patcher. – Complete

As a Developer, I’d like the Camelot Unchained website to convey its main features in a more concise and visually impressive manner.
Create new media pages using new gallery plugin. (Not yet updated.) – Complete

As a Developer, I’d like to improve the visual fidelity and speed of creation of our art assets through the investigation, and possible use of, the Allegorithmic software suite.
Procedural material creation and pipeline documentation:
Example files: Surface coloring techniques. – Complete
Explore using Substance Designer to make VFX materials – Complete
Old materials updated to procedural:
stone_cobble_004 – Complete

As a Developer, I’d like to use a packaged sound resource which the client can unpack and dynamically use based on the correct event.
Fix pre-existing sound bugs, test and iterate. – Complete

As a Developer, I’d like to be able to copy an entire skeleton and its dependencies, quickly, to support unique animations per character types.
Fix additional issues after testing. – Complete

As a Developer, I’d like to have a clear visual design for the UI of Camelot Unchained.
Second pass UI examples. – Complete

Now, there had been a three-week hiatus between User Story updates, but it’s still a pretty fat one with the highlight being the multi-island, multi-server connection. Speaking of that, here’s a screen shot of just what it could look like as one island approaches another. First up, a day time shot. 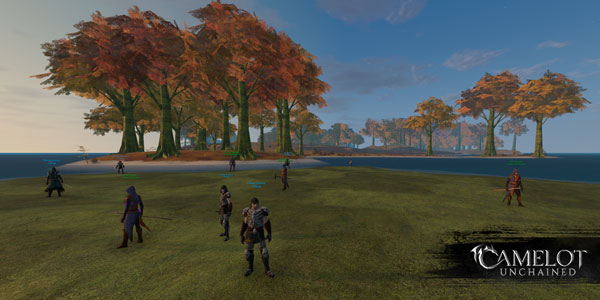 Now, how about one at night? Check out the improved night sky and clouds too! 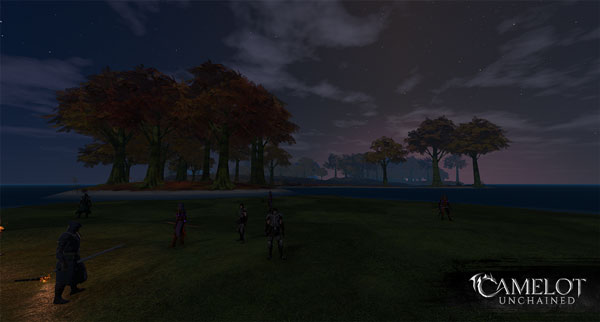 The cool part here is the tech that is now coming online that is behind that screen shot. What we have now is the ability to have multiple islands, on multiple servers and not just have people be able to see them, but see and interact with them real-time. This is not an optical illusion nor a trick (like just splitting up an island on one server). What you are seeing is another server and what we are testing right now with our IT folks is the ability to see and move between them. You can see the other players from your server farm just as easily as you would if everybody was in the same server space. Coming up next, making your abilities move from one server to the next one seamlessly. And that is a rather special achievement, not found in any game I’ve worked on or played. Separate server farms (or worlds) will not be a barrier for interaction, including abilities, siege engines, etc. between Realms. This is a big deal, both tech-wise and for our march to Beta 1.

For today’s dose of art, we have so much to show that I don’t know where to begin. So, let’s start off with some cheerful and fun concept art, followed by a modeled version of the art. 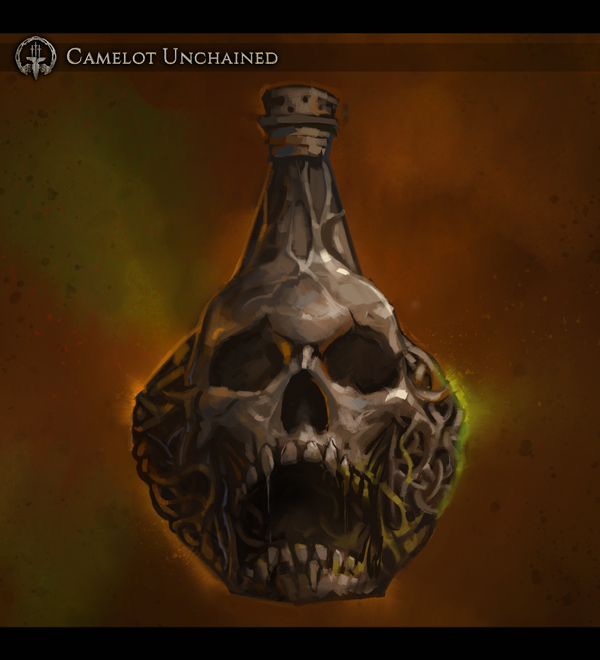 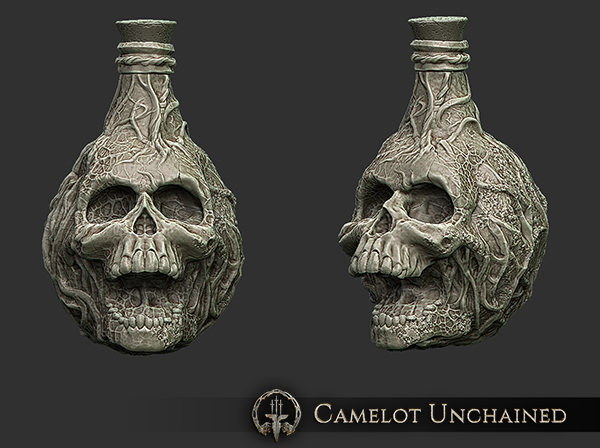 Skulls are fun and cheerful right? Especially for the class(es) that need to use them.

Now how about some weapons? First up, some swords of the Tuatha De Dannan. 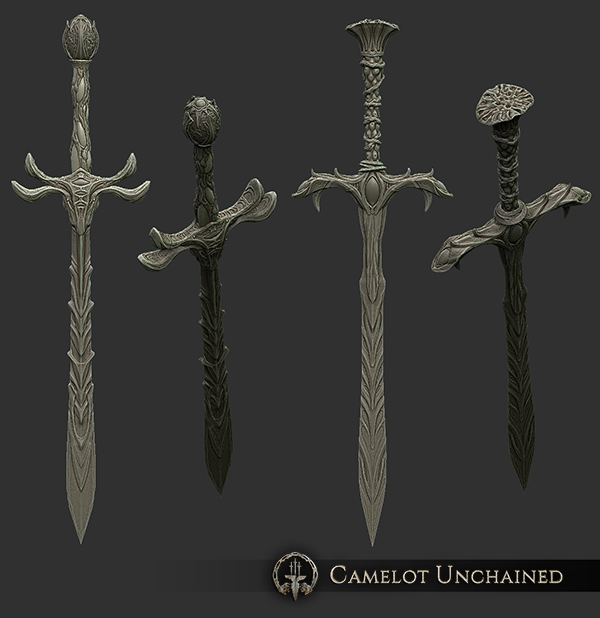 Now a pole-arm and a sword. 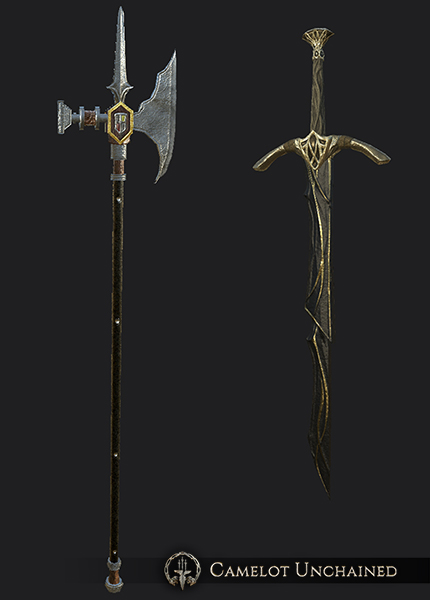 Axe and shield next. Wonder who they belong to? 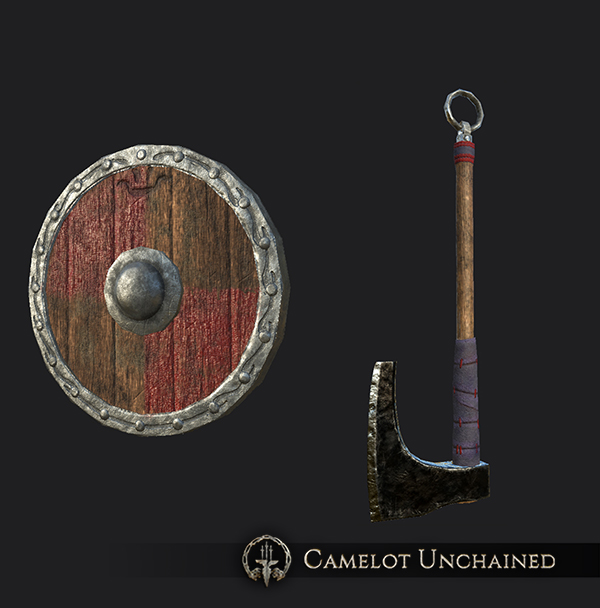 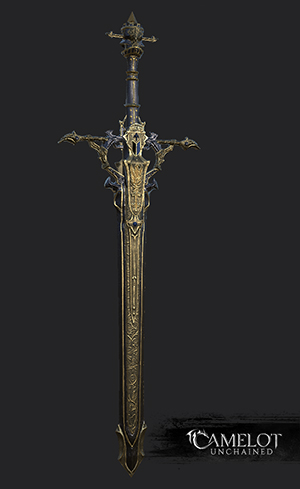 It’s not Excalibur but it’s not chopped liver either!

I end our art section with even more screenshots from our forests. Some of these were in the MOP articles but I thought I’d like to put them out here for everybody to see in one place.

A heavily armored Tuatha De Dannan in the woods. 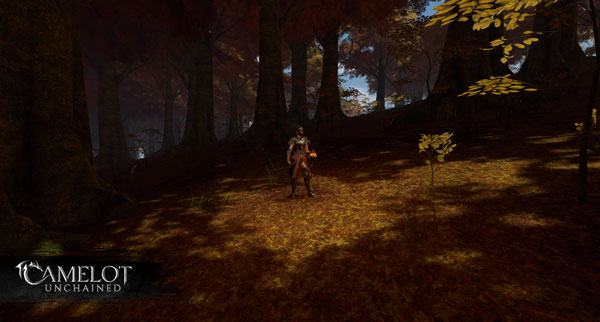 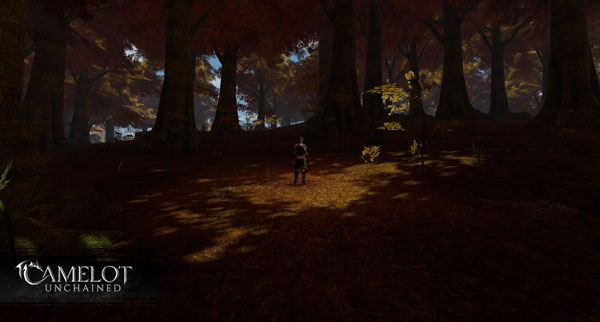 Fall is here, well, not in Virginia yet, that’s for sure. 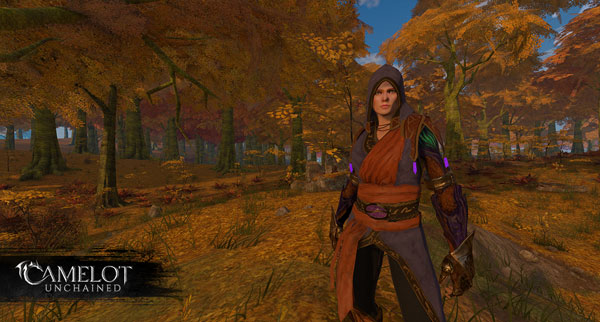 Say hello to my little friend, a torch. 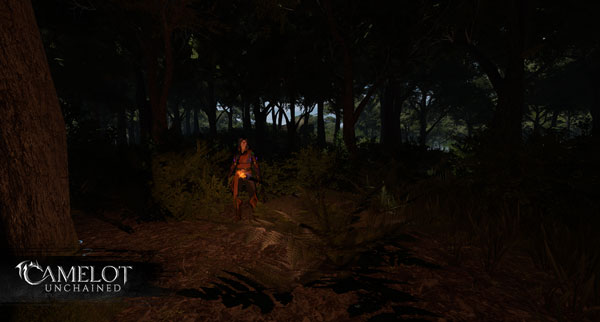 Now let’s end the screenshots with one that sums up what Camelot Unchained is all about in so many ways. 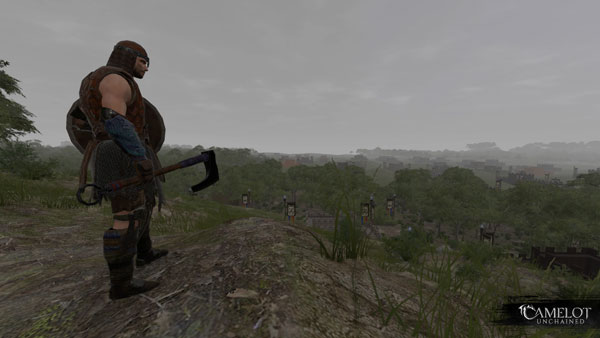 A player, an ax, a realistic (but still improving, we have a long way to go before we are satisfied) world, vast draw distances and lots and lots of targets of opportunities.

For this weekend, we are going to be running an Alpha and IT stability test. I’ll send the details about that test shortly.

Have a great weekend everybody!