In today’s update, we will forgo the usual two-week user story list and instead focus on our “Top ten-ish” list, giving you just some of the biggest highlights of the week. This is because I am the guy who usually collates the user stories, and I am neck-deep in B1 tasking audits again, looking for any potential surprises or conversations that need to be resolved, ensuring we are tasking as efficiently as possible. That being said, let’s talk about this week, shall we?

We continued stress testing groups this week, and are still continuing to do so as of this writing. This is something that just needs lots of vetting in order to make sure we’re in a good place to use that work as a base to start on guilds. We’ve also made continual improvements and bug fixes to the currently available ability components, so continued testing in that area remains a priority.

Behind the scenes of those two testing points, we have several big systems that are still in progress, or are making iterative integrations at this time. And now, without further ado, our Top Ten-ish list, covering the week’s highlights!

Great items to end the week on! Speaking of endings, let’s end on a happy one! At the end of the list there, we referenced the weapons being created, and, in previous updates, how quickly we are working through these assets while improving visual fidelity. Here’s some WIP shots of items that will soon be in player inventories, once the tech to do so is implemented:

I’m going to jump back a couple weeks and start our basic daggers off with some of the previously completed concept art:

Next we hit the modeling stage, which some of you may have seen during one of Jon’s streams. This shot comprises the “high poly” modeling phase done in Zbrush:

This week we knocked off the material phase of these guys. I do want to preface this with the fact these are “basic” daggers, meaning they are less “bling-y” (more plain-looking) than some of our previous models, but pretty nonetheless. As a reminder, these material shots are not taken from within the game. Our next pass will be making sure they look great in-game. First off, Arthurian daggers: 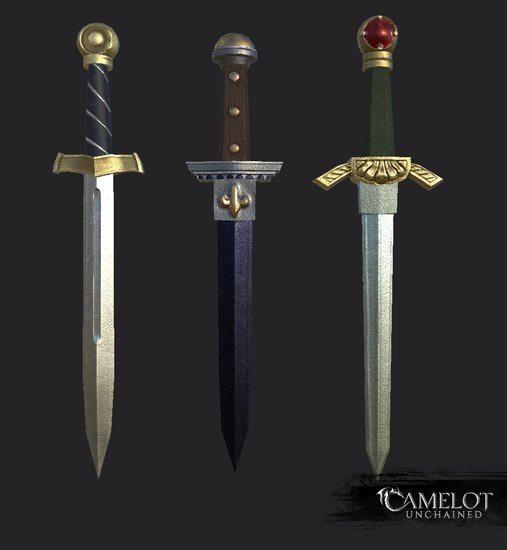 Next up, Viking daggers: 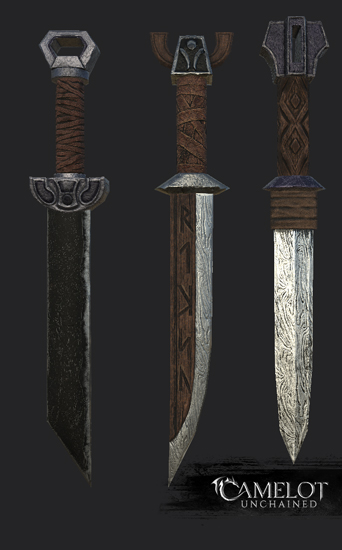 And we finish with our Tuatha daggers: 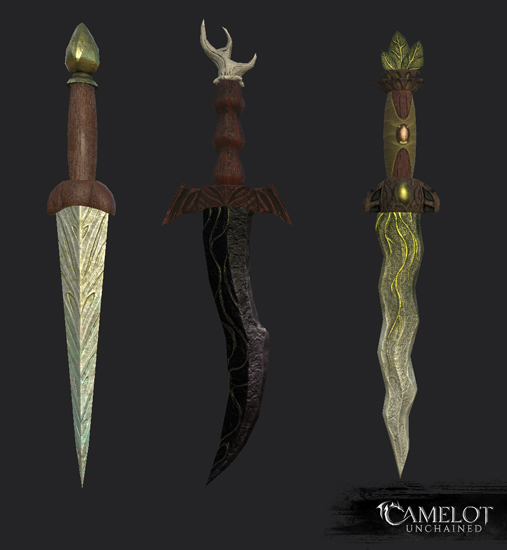 I hope you agree that it’s clear we’re putting a lot of effort into making sure each of these weapons feel Realm distinct. The exciting thing is, the materials used on these will become part of our crafting system, allowing players to gather materials to create all kinds of visual, model, and stat variations.

Next up let’s run through some of the other weapons in different states of progress from this week. First up, concept art of our basic Arthurian axes: 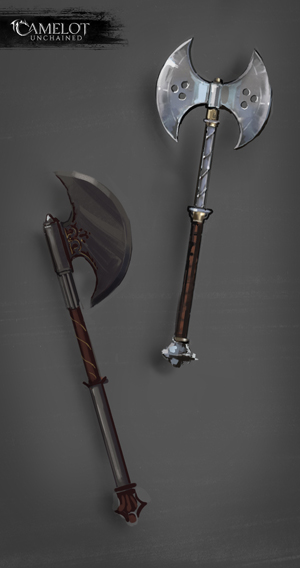 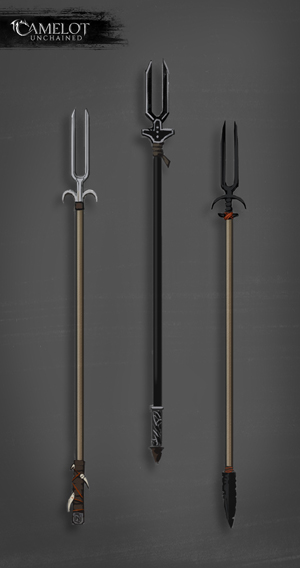 Next up, going along the stages of our pipeline, high-poly Zbrush renders of Viking two-handed axes: 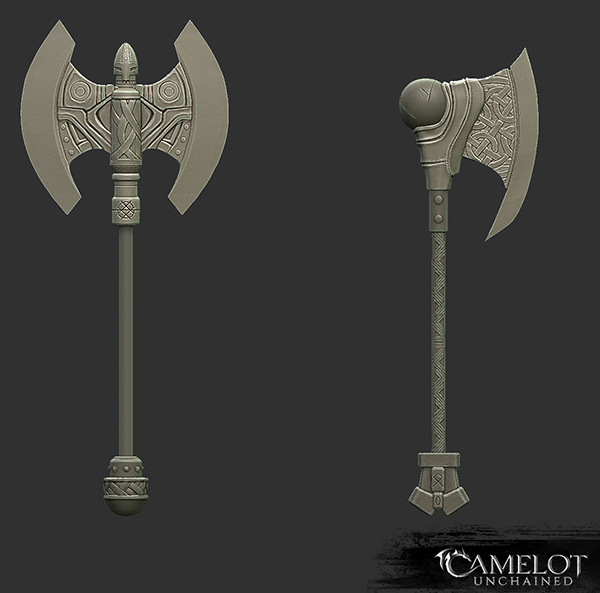 More high-poly love for the Vikings with some WIP polearms: 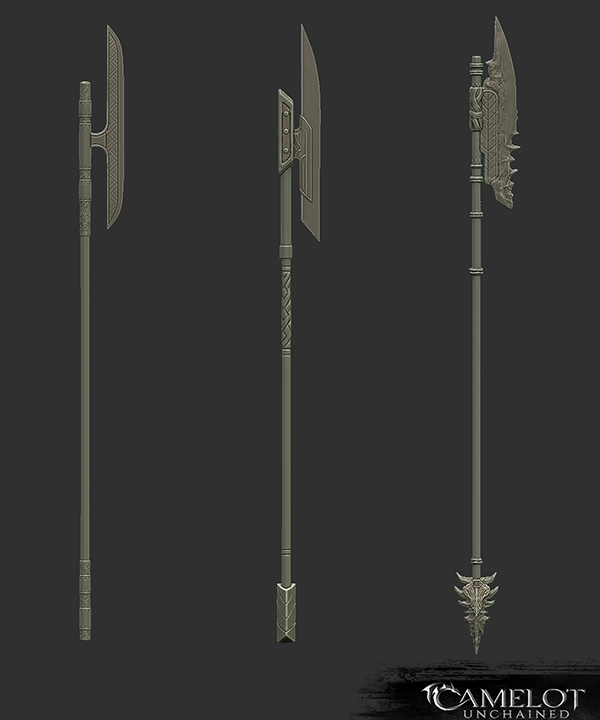 We’ll finish up with a material pass on one of our basic Arthurian maces: 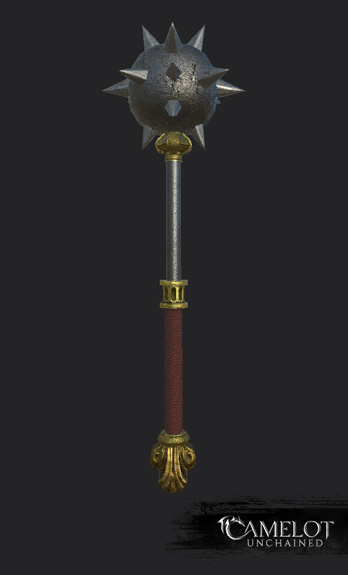 Now, if any of you were paying close attention to our TDD maces (As I know you all are!), these guys went through a couple iterations. We needed something that matched our previous TDD-themed weapons, but also looked like it could crush some skulls, without getting overly confused with a bladed, or slashing, weapon. So to finish this off, we’ve got a couple of basic TDD maces modeled with materials from this week: 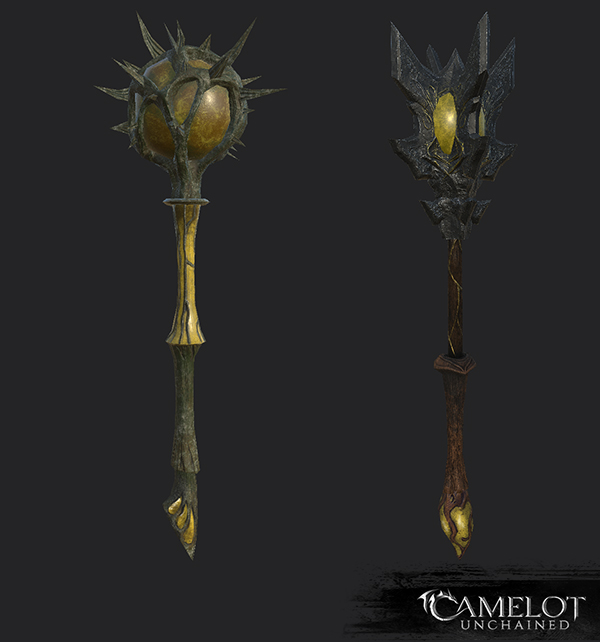 I keep using the term “wicked” when I talk about these!

For this weekend’s testing, we will have Wyrmling Prep open for our Alpha and IT Backers. If the test goes well tonight and tomorrow, we may open the servers for our Beta 1 Backers as well. Rather than send out another email with the same information about tonight’s test, we’ll just ask our Alpha and IT folks to refer to the email that was sent out prior to this one, today.

That wraps up our week’s update, ending on a slightly violent note, befitting a game that will see three epic and diverse Realms clashing to retake a world torn apart! Cheesy, but I couldn’t help myself. Hope you all have a great weekend, and possibly a longer weekend for those with Monday off in the US. Those of us at CSE will be in the office, busy as ever, working to give our Backers a great game. Thank you for your continued patience as we push closer to B1. See you next week during our streams, on the forums, and in our thoughts!