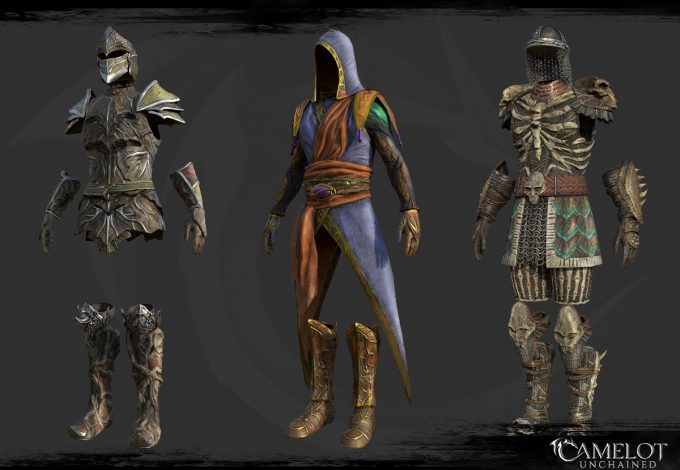 We ended the week late pushing a whole host of changes into Hatchery and Nuada Prep in hopes of getting some testing in this weekend on a SUPER unstable build test on Hatchery for IT and Nuada Prep for Alphas. Unfortunately, the build was simply too super unstable to warrant a weekend test because it would have been a poor experience for Backers. However, our internal testing gave several things to fix come Monday morning. Our focus next week, starting bright and early in the morning, will be to stabilize the build enough to get testers in to see all the changes we’ve been working on. Much of those items are covered in today’s update.

However, for those who have IT access, and would like a sneak peek at all the 64bit and rubbly goodness, feel free to jump onto Hatchery, which is still very unstable. It will remain up through the weekend unless something goes Boom! So if you have access and really want to see the most cutting edge changes feel free to jump in and check things out. We’ll be following up today’s email with further testing documentation for those with IT access!

For this week’s update, we’ve been on a bit of a weather kick in our recent updates, as winter is making itself known in VA. This week, we had our first snow, or sorta a slush, if you will. So while things continue to cool outside, we’re heating up here at CSE! Okay, cheesy, I know, but I wanted to make Mark proud, especially since he is sick and working from home! However, a couple of our bigger engineering tasks are beginning to land for testing, specifically the switch to a 64-bit client, and the rubble update, which Andrew just landed on Hatchery today!

We also have several hands switching our UI over to Coherent, which is nearing the end as the last UI elements are updated and the accompanying bugs are hammered out. As Andrew mentioned in today’s livestream, discussions have been particularly boisterous, just to keep everyone caught up on daily progress and bug fixes supporting these new features!

Once this work is done, we’re not going to take a break–no sir! We’ll be back to pushing on more fun gameplay features, further supported by these big technical changes!

If you missed this week’s entertaining livestream and Q&A with Andrew and Ben, you can find that HERE.

Let’s move on to this week’s Top Tenish, where we go over the highlights of the week’s work.

For art this week, we start off with some renders of the updated armor. With the improvements worked out, we’re continuing our focus on updating the existing in-game assets. This includes all the armor as well as the nude meshes and NPC clothing. Once the required engineering work is complete and we pull the switch to swap to our new skeletons and meshes, we’ll have testing and polish left to complete.

First off, we have a front and back of the TDD medium and light armors, as well as the Viking medium. As previously mentioned, these armors are built from swappable parts, allowing you to mix and match! 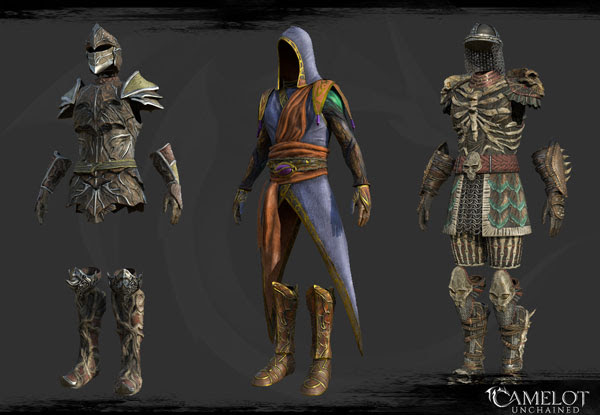 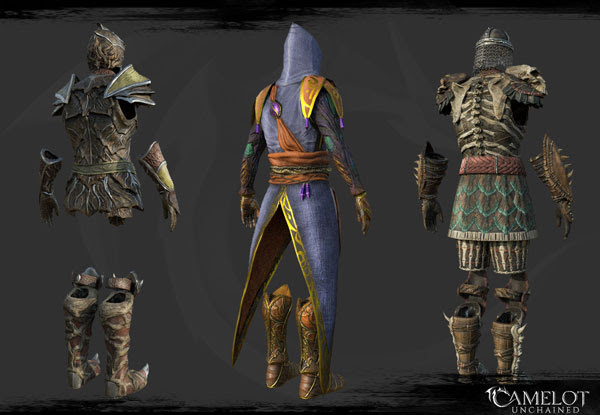 Next, the Arthurian medium, heavy, and light armors. 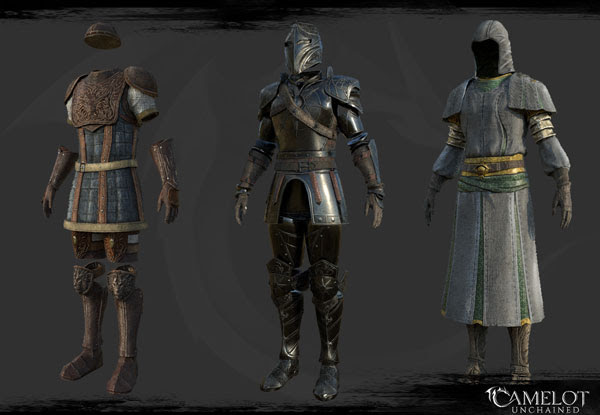 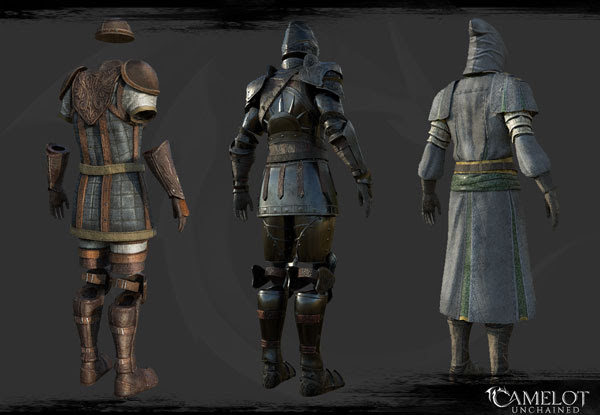 These guys are looking better than ever! We can’t wait to these into the game, which will free us up to start making lots more armor as well as more races!

Next up, we have a couple of new terrain materials from Dionne. We’ll use these in an upcoming area, or maybe use them to add more variety to some of our existing assets. I’ve found that a great thing about our terrain editor is how quickly we can take an existing area and quickly change it with just a few new textures like these. 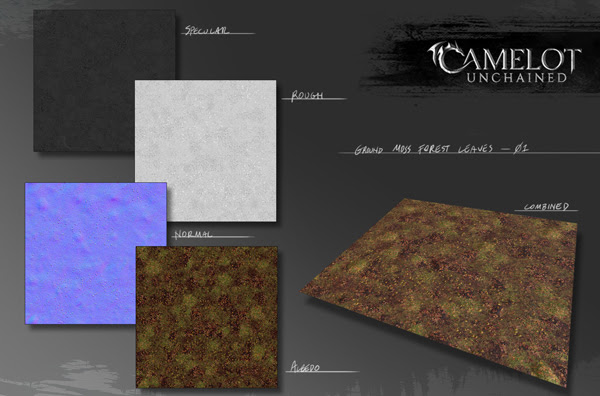 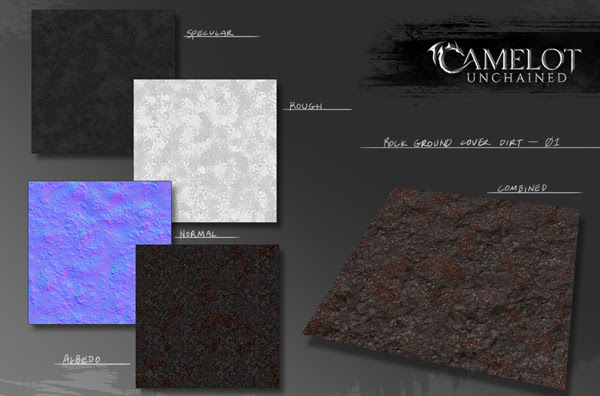 Next up, we have some of the exploratory work Michelle did on scepters, or wands. These are being designed large enough to be seen in hand, as well as support a three-part sub-component system similar to how we’ve put together other weapon types. 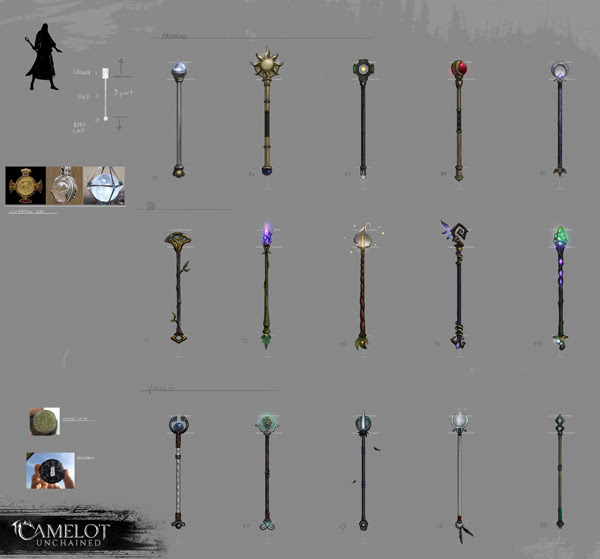 I really like the little “calla lily” one, with the white flower smack dab in the middle! Wands and scepters are only a couple of the possible items Ben has been cooking up for mages. More to come!

That wraps up another really exciting, stressful, but fun week at CSE. We continue to be ever-busy and ever-grateful to our wonderful community of Backers.