In last week’s update, I opened with a comment on how busy we are, and consequently, how that can make a day seem to fly by. Right before jumping into this update, Mark and I were trying to remember who streamed last week. Neither of us could quite remember, and both of us mentioned how quickly the weeks fly by, a consequence of how busy we are and the pace we’ve been setting! Certainly a good thing!

In terms of testing this weekend, we are not planning on a weekend test. However, keep an eye on our tentative testing schedule for more info on testing next week.

If you missed today’s livestream update with Andrew and Michelle, you can find that HERE.

Let’s move to the week’s work highlights in the form of our Top Tenish, below!

I’m looking forward to working on traps. Not only because, well, traps are fun, but it uses tech that could be used to trigger animations or events on other things. A simple example could be a firework mortar on the ground that triggers on proximity. There certainly isn’t a lack for creativity in our studio, and I fully expect us to come up with fun ways to use this tech!

For art this week, as mentioned in the Top Tenish, we have a bunch of NPC concepts for our possible magic using Draugar. As with all our concept pieces, remember that just because we’re showing you these, doesn’t mean these are assets we immediately plan on making. This is our way of letting you see a bit of how our game is being made, starting with the concept phase where we let the artists creativity run wild, with as few parameters as possible. At this stage in concepting, we focus on the ideas, which means rough shapes and quick sketching. It allows us to see if we’re on the right track early, before spending too much time rendering out a nice picture. 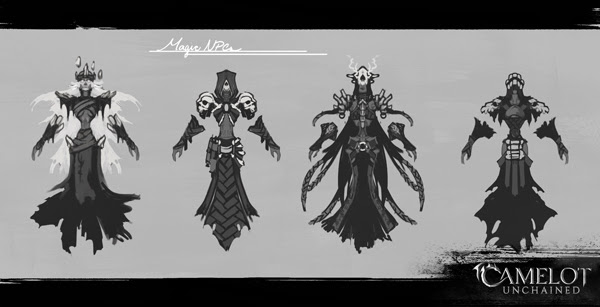 Determining a character we like is partially done by committee. Often, our final models are a combination of concepts, such as taking the skirt from one guy, the chain idea from another, etc. Then we take those pieces and quickly put them together to see if they work well as a whole. If that’s approved, we may go in and further refine the model, possibly including a back or side view if needed. Our art team has been working together long enough that this last step isn’t always necessary, and can sometimes just be done verbally, saving us some time.

That wraps up everything for a productive week here at CSE. As you can see, we continue to work both hard and smart to deliver a great product that we will all enjoy for years to come!

Have a great weekend, everyone!

P.S. Hey folks, MJ here. The word Linuxification has been sticking in my head for weeks and when I was going over the update, and thanks partially to a discussion thread on MOP, I decided to stay late and write this. So, with all apologies to the great and talented Mel Brooks, Windows (which we do usually do love) and the Lady J (I was supposed to leave an hour ago), here’s the short version of “The Linuxification” from the forthcoming film History of the Game Part Deux!

We’re going to teach it-
To save us cash

So c’mon you ioctlsockets, WSAPolls
Our engineers are treating you like trolls
We’re gonna change your statements, we don’t play
‘Cause the Linuxifcation is here to stay!

If you haven’t seen Mel Brooks’ History of the World Part I, linkage here (unless you hate Mel Brooks or offend easily) –  https://youtu.be/LnF1OtP2Svk