Fantastic Friday, all! This was a big week here at CSE, as Andrew landed the first pass of his brand-new animation system. This system is one that he has been waiting to make for a long time, and while it is a first pass, it lays the foundation for what will be CSE’s animation system, now and in the future. Exciting days here, as we saw “Andrewmation” in action for the first time this week. Now, like any other first pass, this system isn’t anywhere near finished, but it has been architected to be built on in the same way somebody like the Backer Necromaniak builds his amazing creations in C.U.B.E. In other words, start from the ground floor, and work your way up to greatness. In addition to that, lots of work got done even as we continue to fight through a warmer, but sicker-than-usual season here in beautiful, downtown Fairfax, Virginia! Okay, on to today’s Top Tenish list.

A fun and exciting week for us all, both Backers and developers, as the new animation system landed. In terms of User Stories, we had 16 old cards with 44 completes and 1 new card with 8 completes. As we continue to work on major systems, there will be fewer but more important updates to our User Stories.

As a Backer, I’d like to have abilities associated with stances.
Two characters of the same Realm will collide with each other unless one or both of them are in Travel Stance. – Complete

As a Backer, I’d like to know about smaller changes that don’t have their own user story.
Load and compile config files into single assemblies. – Complete
Create a small system to cache asset files locally on the build server by their MD5 to speed up (re)builds. – Complete

As a Backer, I’d like to see graphical and networking performance improvements, when building and destroying structures.
Change APIs for getting BuildingGrids to speed up iteration over children. – Complete
Improve threading model for creating renderables. – Complete

As a Backer, I’d like to see improvements in server stability, speed, and robustness.
Upgrade from OpenSSL to LibreSSL. – Complete

As a Developer, I’d like to see improvements in the editor to facilitate my work.
Add editor option to tell the build server to rebuild.  – Complete
Improve gameplay-config-xml-editing experience to validate that the file parses/compiles properly. – Complete

As a Backer in Beta 1, I’d like to be able to pick an item up off the ground, put it in my inventory, and if applicable, equip it.
Items and Equipment:
Set up items code-side to recognize multiple possible slots to which they can equip. – Complete
Armor:
Break down gear slots into more granular armor slots. – Complete
Account for the future addition of upper and lower layers. – Complete

As a Backer in Beta 1, I’d like to be able to play and build on a home island of each Realm, as well as a main contested island.
32km Test Island:
First pass rough layout for testing. – Complete

As a Backer, I want to seamlessly move between islands and zones without being aware that I’m moving between different game servers.
Added world space offsets for zones, buildings, doors, and items. – Complete
Improved OnGroundLocation to help ensure that the zone world offset gets accounted for. – Complete
Increase physics world size from 10km to 40km, and subzone count from 2×2 to 5×5. – Complete

As a Developer, I’d like to improve, and add to, the SFX for re-abilitation.
Create library of grunts, yells, death screams, etc., for both male and female. – Complete
Create first pass class voice sets. – Complete

As a Backer and Developer in B1, I’d like to see improvements in the visual quality of armor for CU.
Geometry improvements and reductions:
Create improved geometry solution for hands, and do rigging test.  – Complete

As a Backer in Beta 1, I’d like the set of animations the player uses to be controlled by the player’s stance, equipment, and other such gameplay factors.
Create additional class-specific stance SFX. – Complete

As a Backer, I want an animation system that blends multiple animations together, allowing for immersive and fun combat.
Google Sheet integration:
Integrate Google Sheets for animation clip data management. – Complete
Alerts and error comments when the build server builds with unusable or unrecognized data entries. – Complete
First pass data entry existing movement, fidget, and basic attacks for testing. – Complete
Implement new skeleton builder. – Complete
AnimSets and Clips embedded in SkeletonResource. – Complete
Formalize the concept of skeletons, with bones and verts able to be retargeted between them. – Complete
New client-side PoseGenerator to replace CharacterPlaybackState. – Complete
Generic SkillEffect on the client that can be applied via ActiveSkills. – Complete

A lot of stuff in the last two weeks, especially considering the downtime we’ve had due to illnesses. We’re a little lighter in terms of new art, for the same reason, but we still have some cool things to show off. Let’s start with some work from Jon. First up, here’s some environmental props.

Wonder where they would fit in best? Now, how about some plants:

How about a statue? 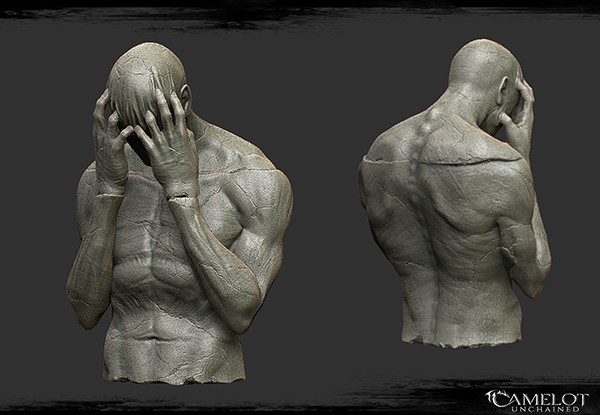 Man, he doesn’t look happy. You can guess at the reasons. 🙂

As per today’s update, and my response to the almost weekly question of a teasing movie quote: “I’m not bad, I’m just drawn this way.”

Drawn and sculptured, I say!

Not your typical tree, right?

For today’s screenshots, here’s a woman who has a point to make.

And as the day winds down, one fully-armored man looks across the lands unencumbered by the limitations of draw distance found in other MMORPGs. He can see to the distant horizon, and watch, from afar, for those who would invade his Realm.

And that is something that sets us apart from just about every other MMORPG out there, and that isn’t changing…except to get better.

And that’s it for today’s update. We will not be holding any tests this weekend, just as we suspected, but we do expect to have some next week. Rarely am I happy when we can’t have a test, but this time, I’m quite content. The addition of the new animation system is so worth it.

Have a great weekend everybody, and as always, thanks for the support and patience!