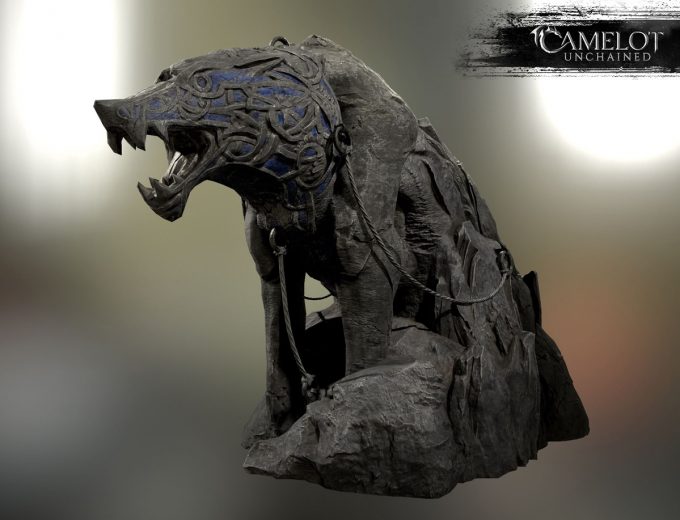 Hello from Terry, here this month pinch-hitting for Mark while schedules, and some seasonal colds, are keeping us especially busy. Welcome to Spring!

It’s been a busy month and more here at CSE, as you can tell from this update going out a little later than usual. Lots of folks here are recovering from various bugs, but we’re in good spirits. We’ve put that extra bit of time to good use, for sure: another round of enhancements for the new version of Golden Plains, some excellent progress on Cait Sith models, and a bunch of other new art, including the widest range of bladed weapons you’re likely to see outside of a home shopping channel. And if you create a new character before midnight tonight…only kidding, of course.

Plus, we have a ton of tech improvements both behind the scenes, as well as some upcoming rollouts that our overseas customers will find very interesting, to say the least. New item spawn animation capability will let our gameplay folks get even more creative, as will the enhanced NPC navigation we’ve landed.

Besides this particular update, you should also check out the CU newsletter, and this month’s livestream here, featuring plenty of Q&A action.

With Melee 2.0 kicked off last month, and plenty of stats work underway, art continues to work through the long list of weapons needed in the name of better CU combat. This month we completed concepts on a few new weapon groups, including the common maces seen below alongside some dev notes from production: Arthurian, TDD, and Viking from left to right.

From here, we’ll move these pieces through the pipeline to 3D and eventual hook-up in-game, for creation via the Make job on your Vox. Until then, here’s a sneak peek of what they’ll look like when actually wielded (and, in fairness, a scale reference used by the artists – we love multitasking). 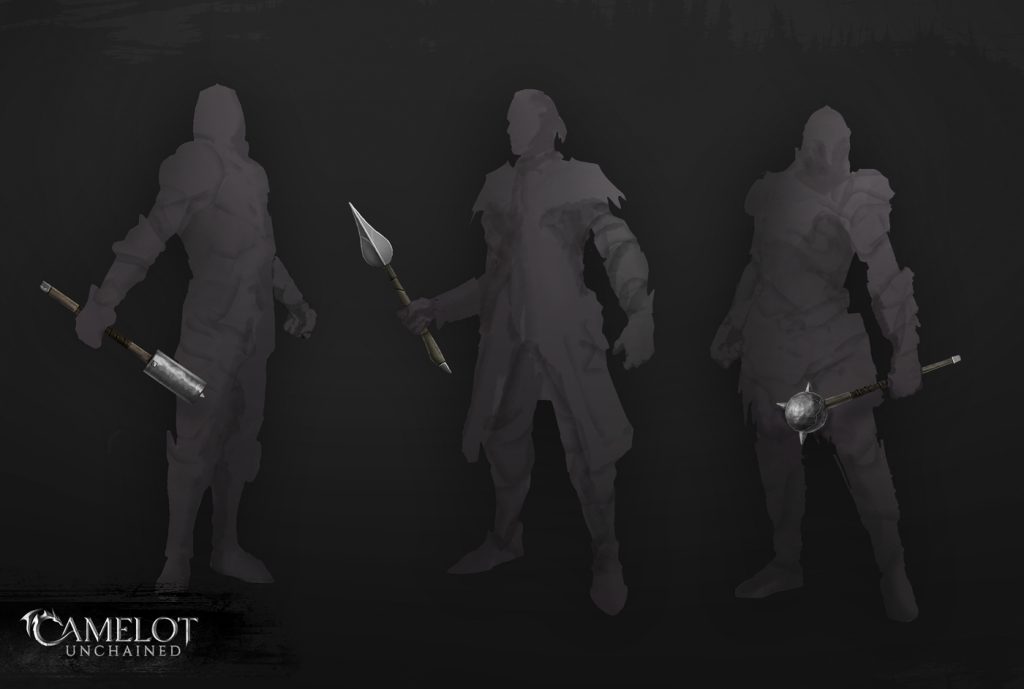 Next up, the concepts for all three realm artifact kits are now complete! Each of these prop sets contains environmental assets that evoke realm identity, with the ultimate goal of populating them in territory controlled by that realm. This means the kits contain everything from run of the mill lampposts, to the more imposing realm statues – or, in some cases, majestic statues, like you can see with the TDD stag. 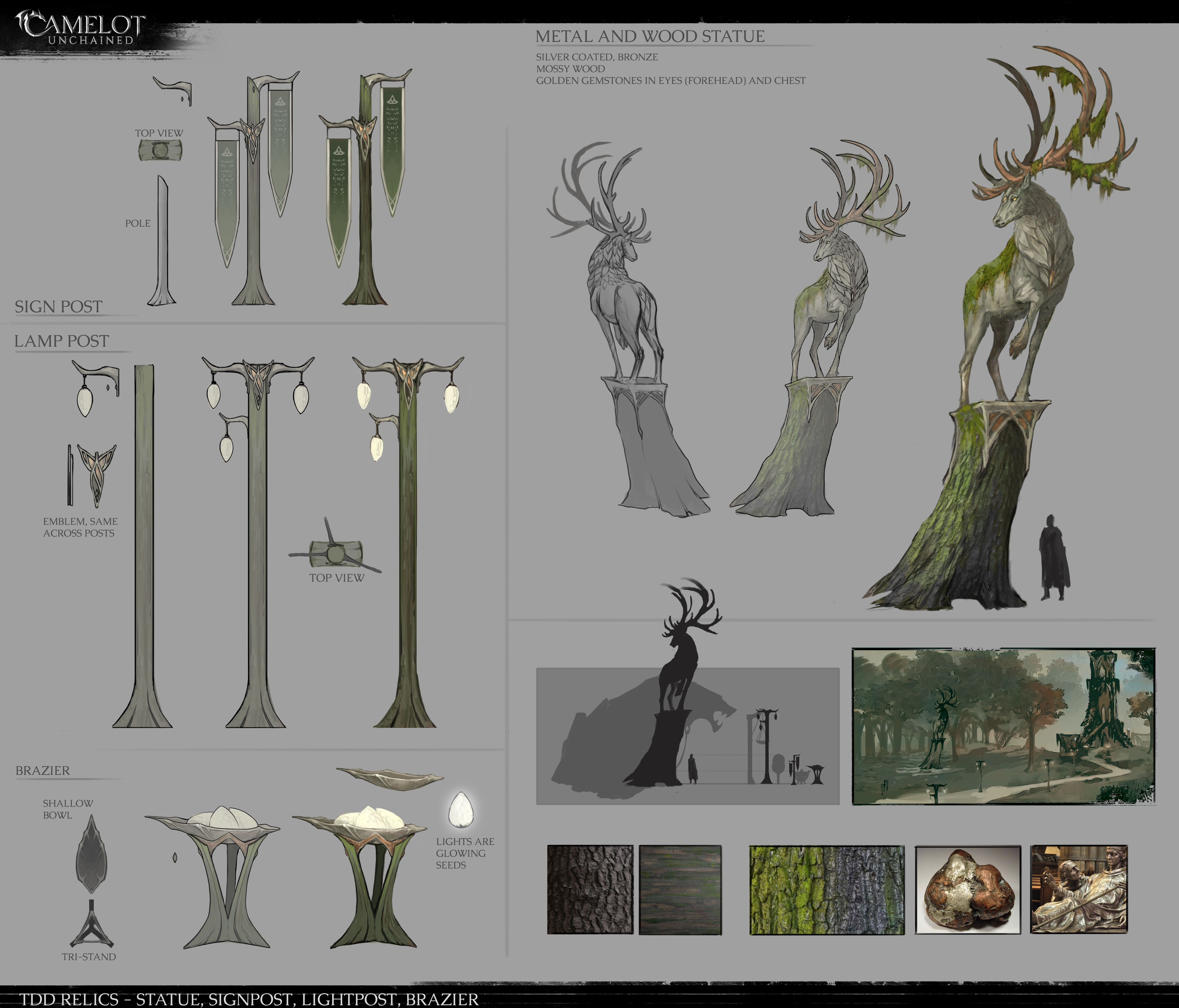 Then again, some statues are both. With the Viking realm artifact concepts finished as well, Jon’s already wrapped up work on their realm’s statue, the Viking wolf. 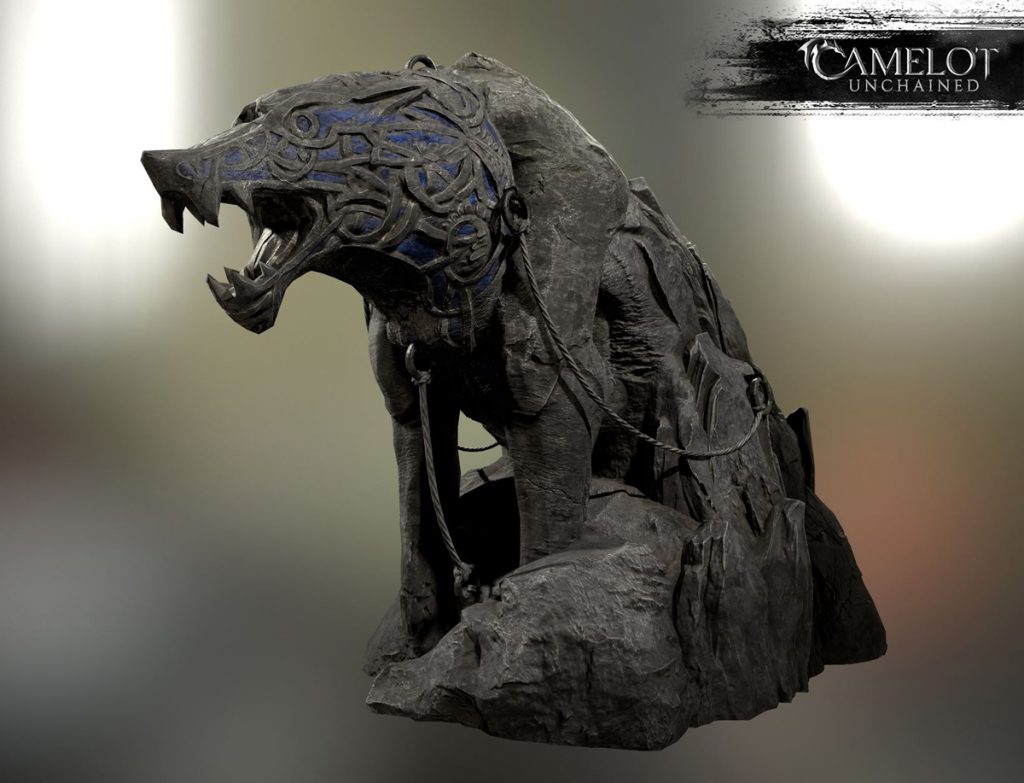 From Viking canines, we move onto Arthurian felines. Thor completed the male Cait Sith models this month, known for their regal and ferocious natures – and, internally, for being pretty texture-intensive. We recommend Arthurians keep a lint roller handy. 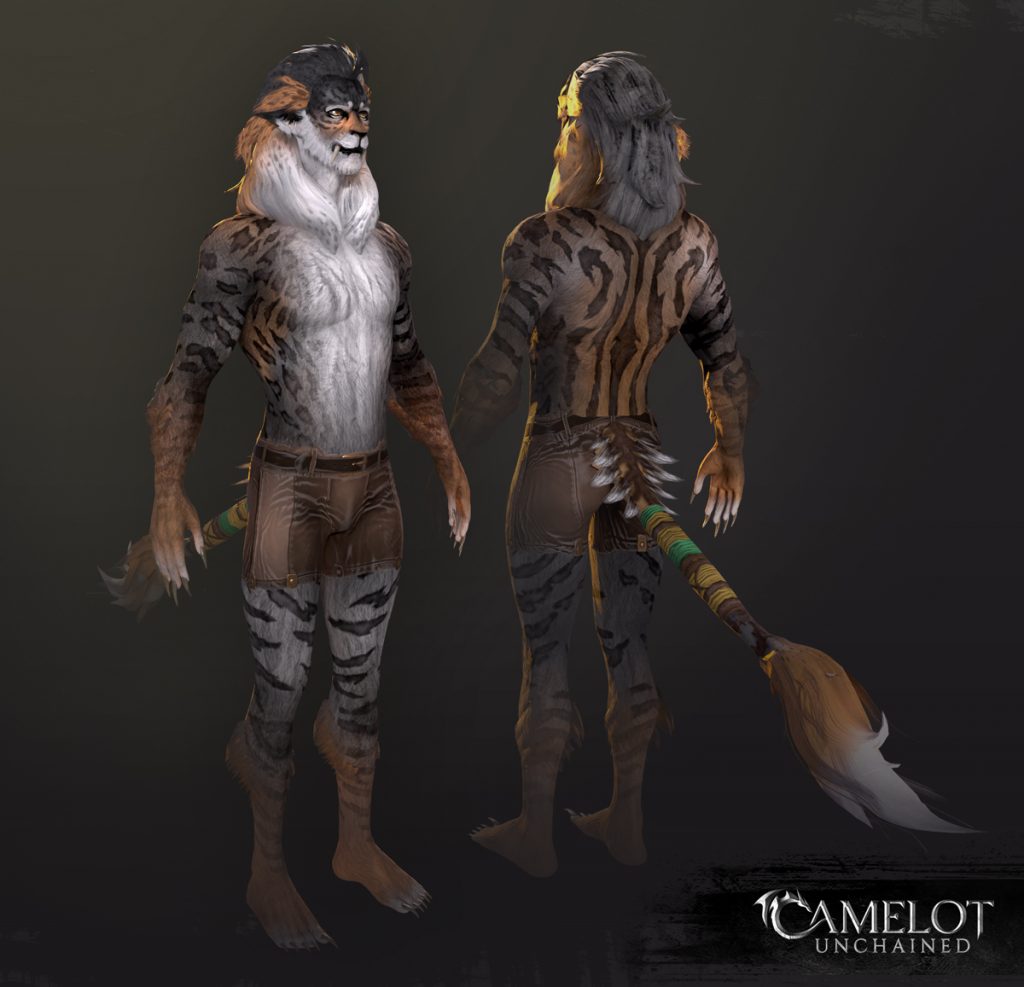 This month’s CU build highlights another pass on the upgraded Golden Plains zone. This revised map builds on the progress of the initial rollout, including the usual spawn clean up and improvement and expansion of the zone size. (It’s a big one, y’all.) 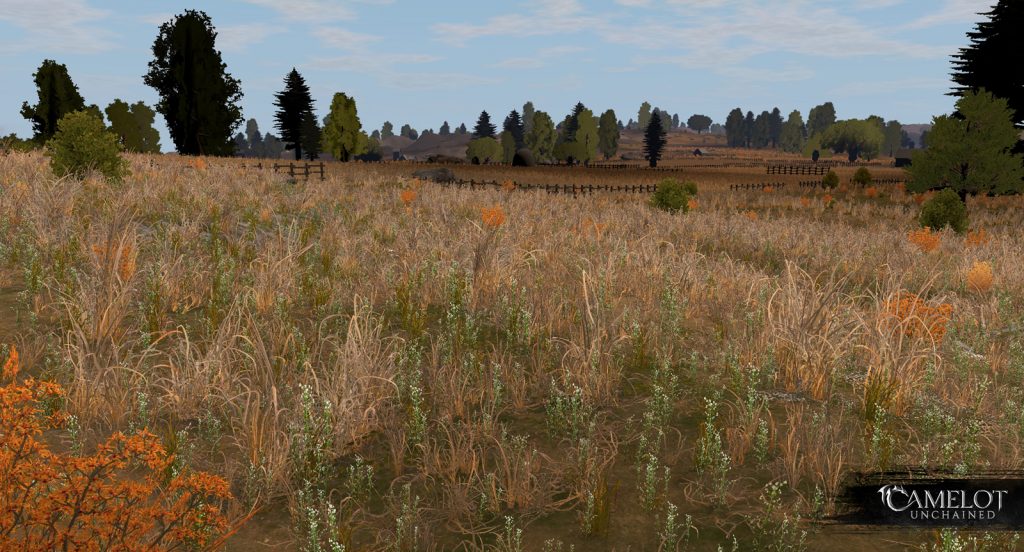 We’ve also added entirely new assets to the map. In addition to a large oak tree and some smaller (and less poly-heavy) variants, we’ve populated the zone with rock clusters that blend far better into the rest of the terrain, and color-corrected grass to put the “Golden” back in Golden Plains. Michelle’s updated the style pack for the zone as well, making for better atmospheric light and fog effects throughout all times of day. 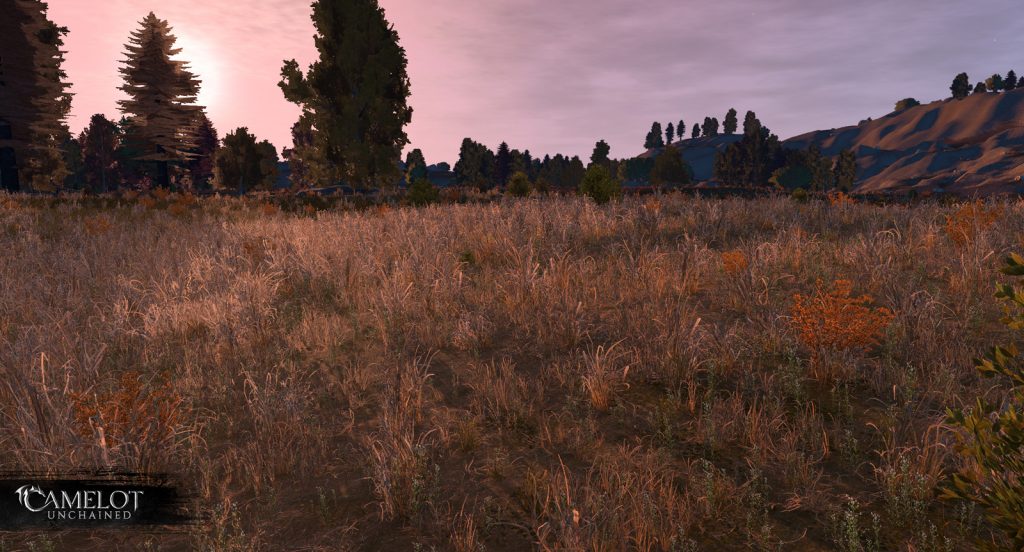 Last but certainly not least, we’ve done another pass on the grayboxes distributed throughout the zone. Originally these pieces were, without exclusion, big featureless blocks used to sketch out future gameplay areas in the zone. We’ve since updated these areas so the graybox assets better resemble specific environmental props: farmhouses, fences, forts, bridges, even individual hay bales. More specific grayboxes make for better testing, especially in regards to scale, and will help us identify exact gameplay specifications before we start the much less flexible process of producing bespoke props. 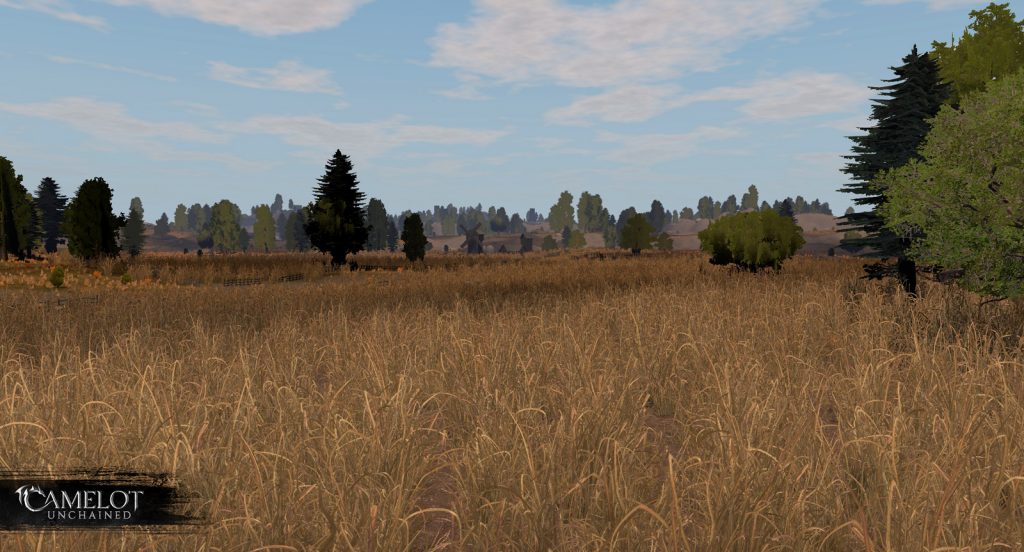 So, you can see the progress we’re making on a lot of fronts. I hope you enjoy the new updates to Golden Plains, and can see where we’re planning to go, as we use this as a template for future environment work.

For my part, while I am always excited about everything we work on, I am particularly jazzed for the upcoming launch of our European shard. We will give you plenty of time to update, so that you can participate, when we are ready to roll that out. It will be soon.

In the meantime, thanks as always for your patience and your support. See you for the next update! 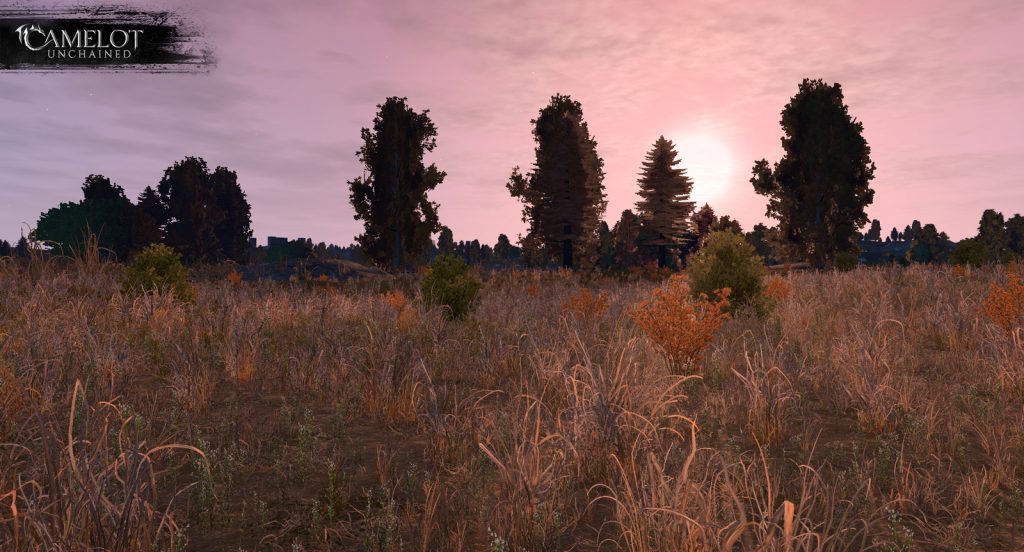