We’ve wrapped up another good week here at CSE. I know we often start out our weekly updates with such good news, but I can promise you we will be open and honest, as we have always been, next time we have a crappy week. *Cough*pollen*cough*. As with some of our previous updates, we’ve got more gameplay-oriented highlights in this week’s Top Tenish, as we said we’d be turning our focus. We’re slowly moving from some of our system needs for Beta 1 and into more gameplay, which has, quite honestly, been bringing smiles to the team; we’ve started feeling more like we’re making a game and not a tech solution. One of the highlights this week was Ben taking resources from an object in the world, running it over to his Vox, and going through the process of making a wood block to build with. That one sentence represents so much hard work over the past weeks and months, it’s hard not to smile over it. We’ll keep having these moments, and more of them, as we get closer to Beta 1.  For those of you who missed our live stream update earlier today, you can catch that HERE. This week, Ben and I (Tyler) give you the TL;DR of the week, with plenty of design-oriented questions at the end. With that said, let’s move into the Top Tenish and the User Stories. If you want to skip to the pictures, start scrolling down!

For the week, here’s the highlights, in Top Tenish form:

12. Art – TDD Scorpion: Jon finished off the TDD variation of the scorpion siege engine and some ammunition models. Mike will hook some temp VFX up to these for testing.

A solid week has been had by all. Note that our Top Tenish this week really shows that shift in focus we spoke of, from engine tech to gameplay. For a more detailed look at the last two weeks, we have our bi-weekly User Stories update:

As a Backer, I’d like to know about smaller changes that don’t have their own user story.
Move into CSE Seattle office. – Complete
Add SceneDebugDraw to allow for debug-only DrawLine/DrawBox/DrawBounds helpers. – Complete
Prevent jumping from desyncing movement with terrain.  – Complete

As a Backer, I want to be able to own a plot of land and build within it.
Use materials to craft blocks. – Complete

As a Developer, I would like easily searchable server logs that are the front line of finding problems.
Task logging contexts, including updater actions. – Complete

As a Developer and Backer, I’d like to see improvements in memory usage and threading.
Allow safe pointer to be copied around via move semantics and pass ownership. – Complete

As a Developer and Backer, I’d like to see improvements in lighting and rendering.
Adjust particle alignment in geometry shader. – Complete
Provide more control over velocity inheritance. – Complete

As a Backer in Beta 1, I’d like to play as a Crafter with basic gathering and crafting mechanics for testing.
Repair functionality for Vox. – Complete
Add job for building blocks in Vox. – Complete
Craft multiple items at once. – Complete
Resource Nodes:
Apply position offsets only to the initial position. – Complete

As a Backer in Beta 1, I’d like to be able to pick an item up off the ground, put it in my inventory, and if applicable, equip it.
Items and Equipment:
Item components which have no saved instance data do not save an empty component out to the database. – Complete
Store used repair points and durability points in item durability component. – Complete
Container support for items. – Complete

As a Backer, I want to seamlessly move between islands and zones without being aware that I’m moving between different game servers.
Add zone name to UI. – Complete
Portal teleports directly to linked portal. – Complete

As a Developer, I’d like to have a clear visual design for the UI of Camelot Unchained.
Beta 1 version:
Second pass health bar styling. – Complete

As a Backer in Beta 1, I’d like to be able to further personalize my character through the use of the Banes and Boons system.
Add Traits settings file with min/max points and required/optional general traits. – Complete

As a Backer, I want an animation system that blends multiple animations together, and allows for immersive and fun combat.
Use inplace/forward jump/land clips. – Complete
Move per-region blend values and any/full masks into BoneMovers. – Complete
Coming out of jump, sync the running animation cycle to the animation landing pose. – Complete
Call SetNewAnimSet on BoneMovers whenever their PoseGenerator changes. – Complete
Scales play speed to sync to the walk speed. – Complete

As a player, I want to view a character UI that shows me my stats, allows me to swap out my equipment, organize my inventory, and see my collection of crafting resources.
Mock-up created. – Complete
First Pass UI layout. – Complete
Load items through the API. – Complete

If you’ve been keeping track, you can see we’re making good progress, compared week to week, even despite the office move in this week by our Washington crew! With that complete, and for those of you who took the shortcut to art and scrolled down, let’s get into this week’s pretty pictures, shall we?

First up, we have a link (click the image below) to some of Scott’s animations, representing different timings of the prepare and recover phases of a swing. To provide further detail, because your abilities are created by the players out of different components, the timings will vary. To compensate for this in a way that not only looks better, but also visually conveys the power of an incoming attack, Mark came up with a solid idea to mix in longer preps and recovers. Speeding up or slowing things down just didn’t work as well, neither visually nor for the design of the game, and simply wasn’t good enough for Camelot Unchained®. There are other fun ways we can use this concept, which we’ll talk about later when we’re in Beta. 🙂 If you want to catch Scott’s animation stream from this week, you can find that HERE. 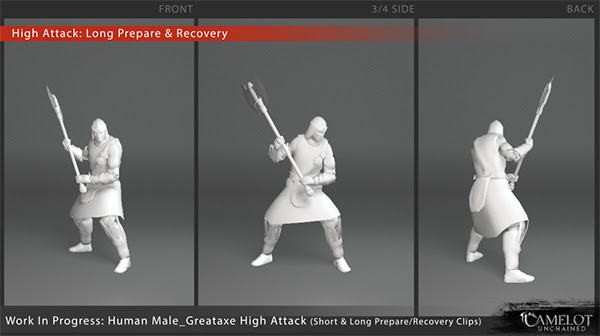 Moving along, Jon finished up the materials on the TDD scorpion siege engine, which will make an appearance in-game later, once we have the factions’ versions hooked up. If you want to catch Jon’s stream working on this item, you can find that HERE. 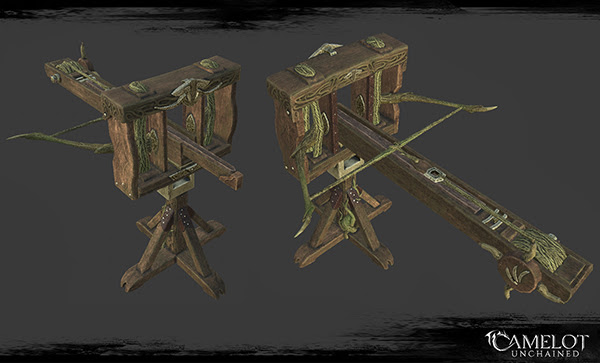 Of course, you’re going to need to create some basic ammunition for your scorpion. I emphasize “basic” because, for now, these will work for testing until we move farther down the line on our crafting and ability features. The image below shows with and without materials. Which one do you believe belongs to which Realm? 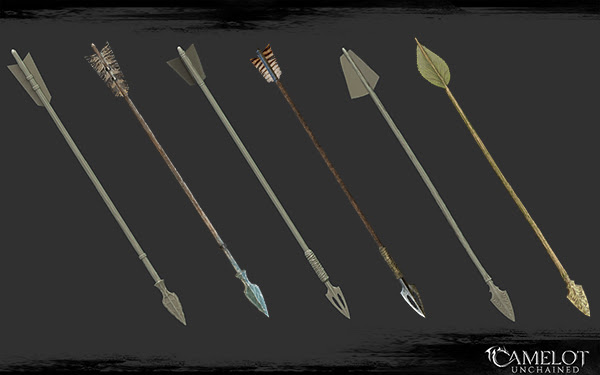 The new Washington office setup pushed back our multi-zone portal tests this week; however, we have begun prepping. For upcoming tests, Michelle made a rough map of the islands we’re using for tests. (These islands are very much just for testing right now, and will definitely change). 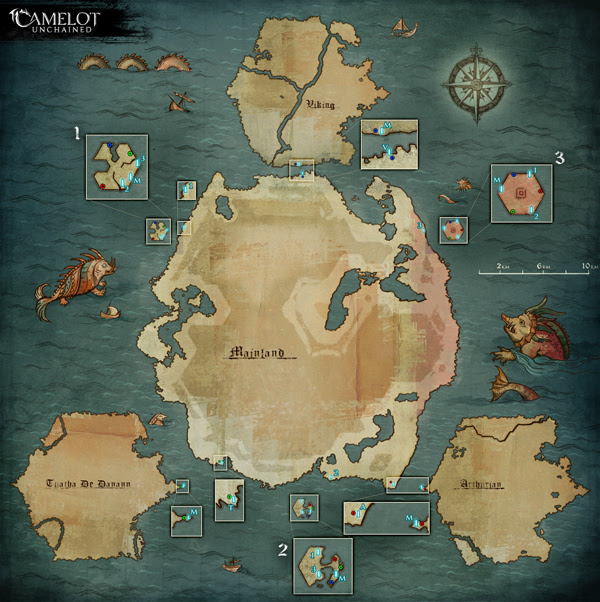 Along with this work, Michelle has been working on a concept pass of the health bar UI. If you want to see our live review of it from last week, you can catch that HERE. For now here’s a WIP, based off that feedback. 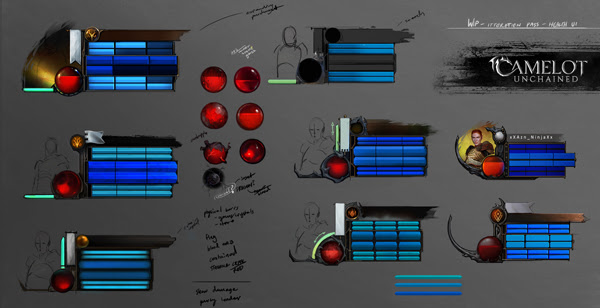 And now for some screenshots! As always, these are directly from within the game, not renders, and are not retouched in any way.

Per our Top Tenish items above, Dionne has been creating new assets to flesh out one of our older (actually, the first one Tyler made on this project!) test forests. In the image below, we have some new tree variations and stumps, representing only a portion of the items we’re adding to make it feel more like a real forest. (We’re not looking at the background pine trees, just the foreground pieces). 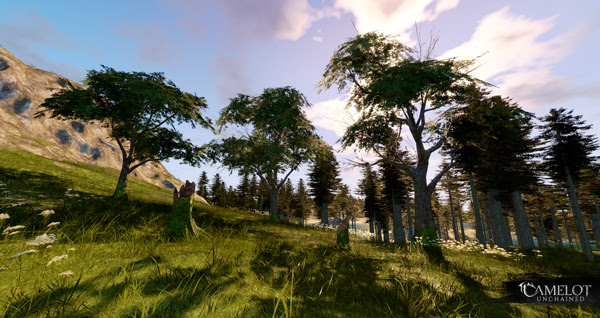 Next up, we have a couple of shots of our WIP scorpion siege engines, accompanied by their Arthurian counterparts. 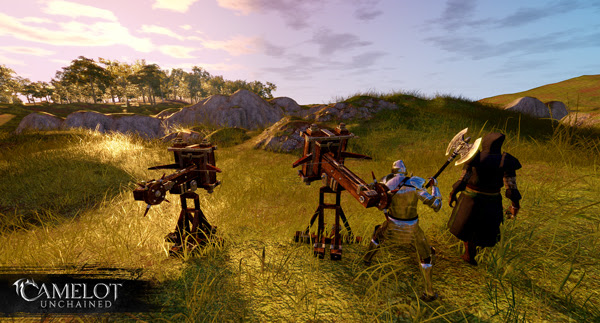 To finish off the week, we have a group shot of some very happy team members in their brand new office space. We’re all very happy to check this box off and get back to work!
From Left to right: Christina, Colin, Brad (Mr. “has his eyes closed in every picture.”) Brittany, George, and Matt. I wonder who took the picture? Hmm… That wraps up the week here, full of progress, and team members turning into family members as we turn Camelot Unchained into the game we’re all looking forward to.

P.S. We had a last-minute gift from one of our Backers, Ludovic, today! A snow cone maker! Awesome, awesome gift! Thank you so much! Here’s a shot of the team dropping everything to set it up in the kitchen, with Michelle looking as majestic as ever. Hey! Who’s that new guy in there? You’ll have to check this month’s issue of Unveiled for the answer. 😉 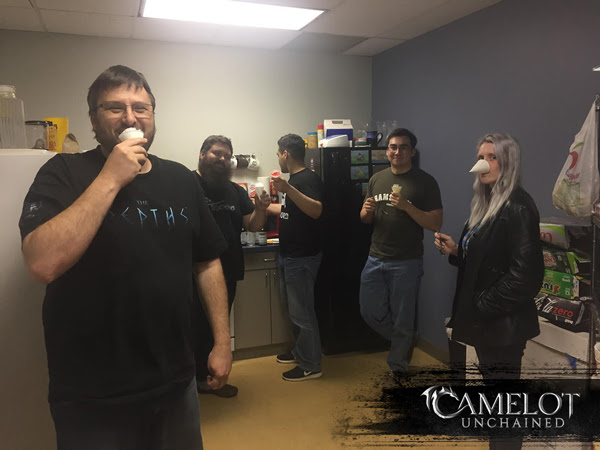