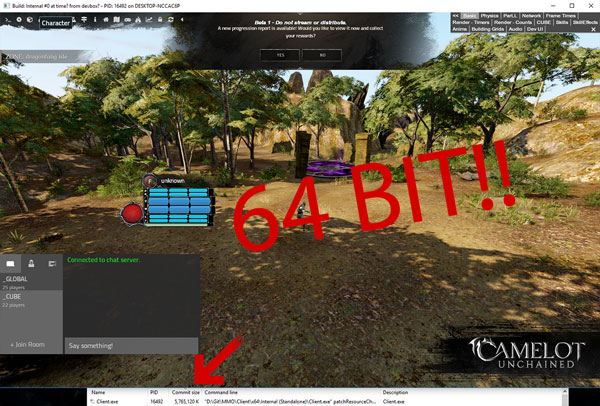 Last week, we had beautiful, picturesque views outside our office as the trees mostly finished their transformation into the autumn coloration the East Coast is known for. On one particular day, Andrew stood at the window actually dissecting the visuals as a rendering engineer! However, this week, and particularly today, we’ve started getting that terrible cold rain the East Coast is also known for, so the title of this update refers to the weather outside.

Thankfully, we’re warm and happy in the office! And boy, are we being productive! We’re working through some big features, including building destruction with full server-side physics rubble, a 64 bit client which gives us access to more memory, as well as the changeover to Coherent for our UI.

On top of that, Art is updating our characters to not only look better, but also animate better, while taking the same or fewer resources to render. We truly have a lot going on right now in order to deliver some of the game’s bigger features. We’re looking forward to those particularly large battles that only our engine can deliver!

If you missed this week’s livestream and Q&A with Mark, you can find that HERE. These streams are a great opportunity to interact with us, and to ask any burning questions you may have.

Let’s move on to this week’s Top Tenish, where we go over the highlights of the week’s work.

For art this week, we start off with the UI update from James on the scenario scoreboard. He turned this one around fairly quickly this week, thanks to the existing style guide work he’d previously finished. 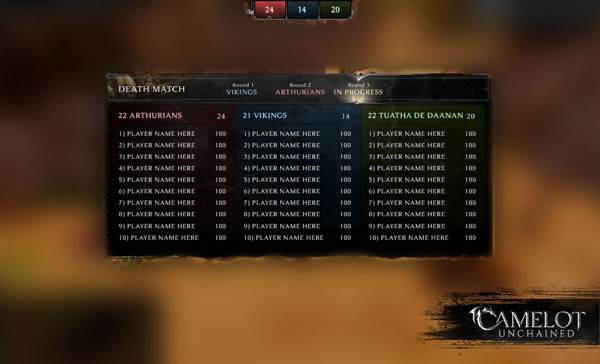 Michelle continues to help out on UI. You can see below some possible changes to the health bars to show class archetype.

Scott continues to work through the new shared casting animations for mages. These will get us into testing sooner, and will be saved for more complex animations later. This static image shows off the importance of key poses in our animations.

This week, outside of general art oversight and reviews, Tyler (that’s me!) found a few hours to create some new ground textures to further flesh out our world. These may be incorporated into some of the new work Dionne will be starting on next week. 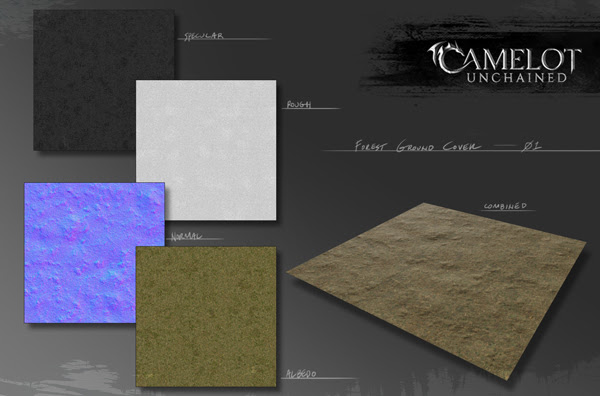 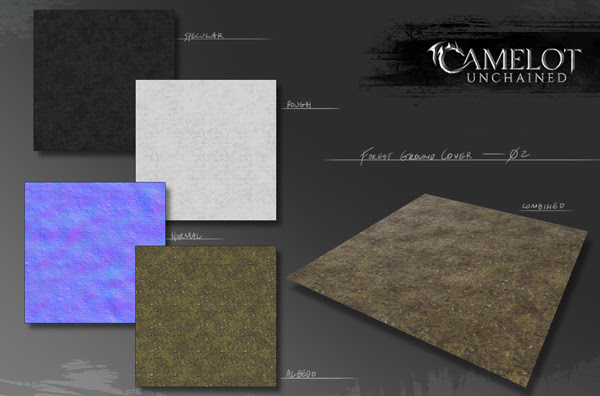 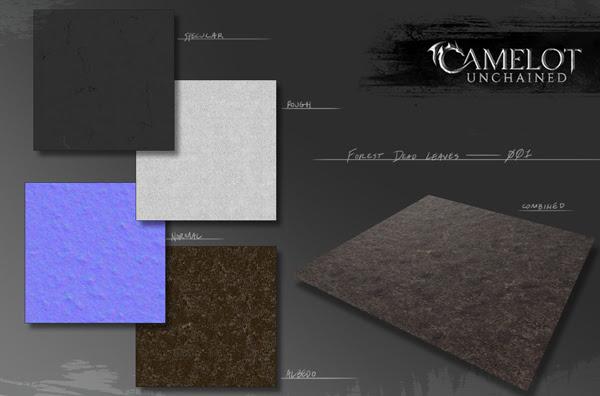 The character 2.0 update is a big and lengthy task to improve the existing character art. Once finished, this will free us up to begin work on some fun (and non-Human) races of CU.

And now, I’ve pulled a few images from the home islands that we have yet to show off!

Dionne and I completed all the environment props and natural environment assets, while the Builder’s Brigade used our in-game building system to create the required structures. First off, a long shot down the TDD docks in Ériu. You can see the tail end of the TDD boat to the right, and towers out in the background! 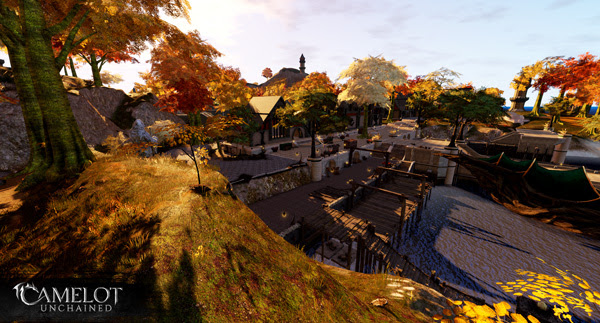 On the Viking home island, Midgard, Dionne created this great area of bridges between raised terrain around a central tower. The second image is from the back side of the docks on Midgard, showing off the great tortured statue that Jon created. 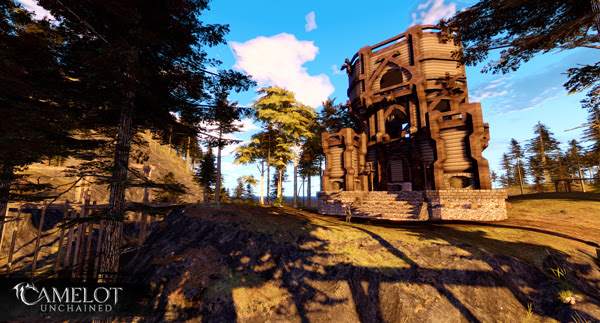 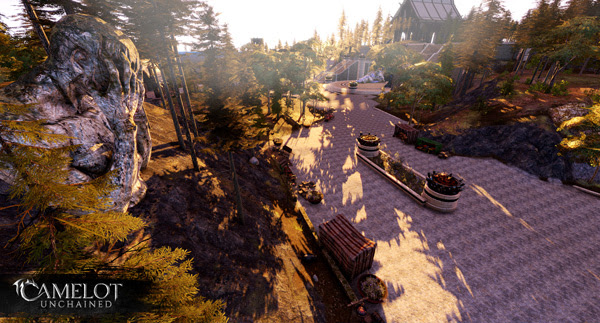 Finally, a couple of shots from the Arthurian home island, Briton, of the walkway up to the portals to go to the Builder islands, and the small adjacent courtyard with the (also player-built) Healer’s Hall in the background. 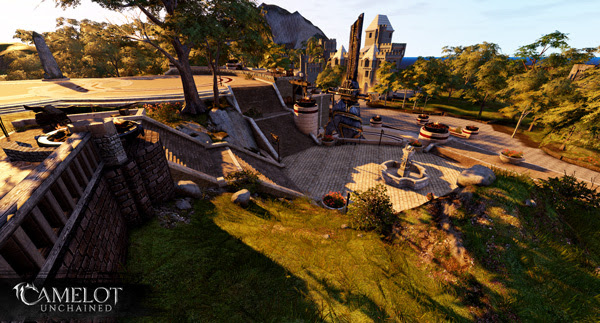 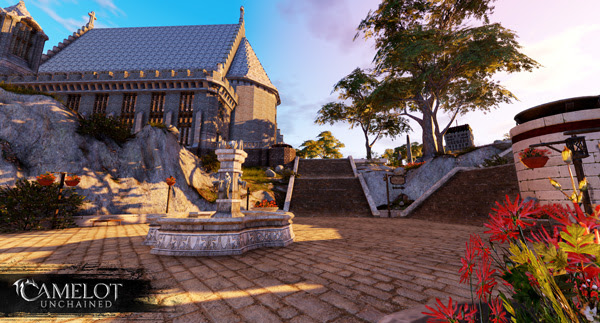 AND THIS JUST IN! We’ve got the client running in 64 bit! Literally just before we were going to send out this update, George and Tim got the client up and running! Check out the memory usage in the image! 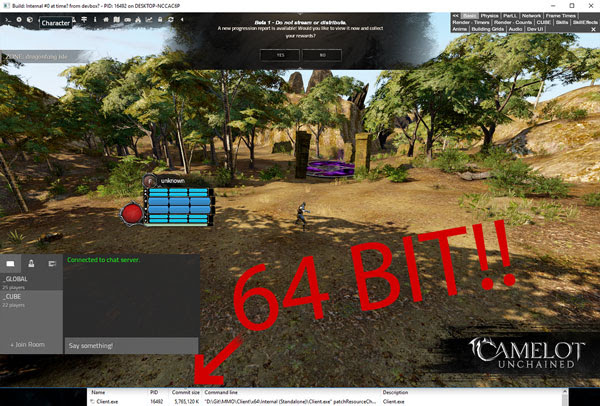 That wraps things up for this week! I’m looking forward to the next several weeks before the end of the year, as we have a lot of buns in the oven that are almost finished baking! Thanks as always for your support!