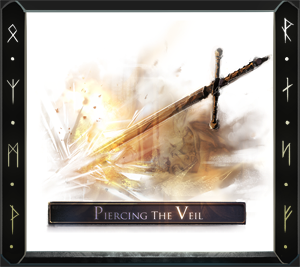 Welcome to our next Piercing the Veil™! We are all excited to be approaching the anniversary of our successful Kickstarter, and it brings us joy to be able to provide some answers to our wonderful backer’s burning questions. Enjoy!

Darnzerk and Vesir asked: Will every tree in the game be harvestable, or only a select few? or will we have to build something like a logging camp nearby to harvest certain areas?

Not every tree will be harvestable, some will exist solely for environmental enhancement. There has been talk of a dynamic system such that resources ‘react’ to player harvesting by depopulating and perhaps shifting to a new area. Logging camps would fail in such a system. We don’t want the standard respawn node X minutes after harvest, rinse/repeat mechanic seen in most games. Discussions will continue, but expect the unexpected. There has also been talk of trees going through stages of growth. None of this is confirmed of course. Also, keep in mind that the effect of Veilstorms on an area can be important.

Dazed asked: Can we expect large personal vaults/banks that we can expand by purchasing slots using in-game currency?

We do plan on having expandable storage for your gear and resources, and yes, in-game currency and perhaps even the help of a friendly Crafter will be needed to procure such inventory expansions. Mark has confirmed that inventory bag/vault management due to number/size of bags will not be as important as it is in many other MMORPGs.

Jagp asked: The Nuada story mentions villages and people all around the land. Does this mean the world will already have NPC villages when the game starts?

There will of course be the starter cities. We don’t currently have plans for other, satellite NPC-populated cities at this time. We favor the idea of players creating the world outside of the starting zones. Remember, there is a lot that happens between the end of Nuada’s tale and the world the players are in now.

Fanglo asked: Will any items in the game be bind on pick-up or bind on equip?

Bind on pick-up does not make good sense for our game given that all but the starter gear will be crafted, rather than dropped. Materials for crafting will not likely be BoP as they will be a resource that can be traded/sold. Bind on equip may be used for some items, yet it is not meant to be a major part of the game’s item system.

aylwynn asked: How does CSE feel about second weapon sets for CU?

Since players won’t need to swap out a set for PvE there will be less need for two sets. Although, some players may prefer to have two sets in PvP. These players should be prepared to experience a penalty (time/vulnerability) for swapping out weapon or gear sets while on the field of battle.

Tirudan asked: Will the same resources be scarce for every realm or will there be differences? E.g. the TDD have much copper in their lands and the Arthurians have much iron, so what is scarce for one is abundant for the other.

Mark has a heavy bias toward diversity, so it seems likely the Realms will have varying/dynamic scarcities in resources, and that those could change over time.

SpykeDruid: Is there a target time for crafters to create items or objects that you can share with us?

This will be highly variable depending on item type, item quality, scarcity of resources, and Crafter skill. We can’t therefore give any meaningful target time for this.

Arrobee asked: Will housing consist of a plot system, claiming a square of land that you can build on, or more of a free form, where you could actually build your own house around someone else’s building?

In open areas (which will be most of the world) it will more or less be choose your own adventure, with obvious limitations for steep terrain, structures already in place, etc. In the safe zone there will be plots that you can claim/purchase and once you do so, others will not be able to build there while you own it.

Rilos asked: Is there going to be items you can dress up in while in your house or not doing battle?

Crafters are a very important part of our game and we want them to have a staggering diversity of items to craft, so yes, non-stat player clothing is something we plan to implement.

Rilos also asked: Is there going to be dev player events on occasion in Camelot Unchained?

Gunness asked: Will the land/zone maps be mirrored in size and shape, or will they be truly unique?

Tough to say much about these yet as maps have not been created, but we, as always, lean away from mirrored and toward unique.

Well Golem, this is something the studio has discussed and we do like the idea of players being able to build down, though not too far down because then you are just hiding :p So if we do implement this, players would likely be limited to a floor or so down, essentially the basement level. Could be a good area for setting traps! And, of course, there is The Depths. 🙂

Eldanari Ben asked: Will the overuse of magic in a confined area/battle have possible negative effects on your character/s or their environment?

Quite possibly. Remember, the Veil is alive and it’s maybe a bit miffed, what with that whole getting punctured business and all.

We are open to suggestions on this one. They’ve already taken over the studio, drunk all our soda and have peed the perimeter.

Naebleiss asked: Honestly now, Do you guys get sick of the 70 trillion questions reworded regarding the same topics?

Nope, we are far too busy being happy that people are excited enough to ask! We wouldn’t be here if you didn’t care.

Sornin asked: Do you believe in placing limits on the number of members in guilds?

The maximum size of guilds has not been determined yet. One of the things we’ve seen in other games is that too often, a couple of very powerful guilds come to dominate a server. While we do expect to have large guilds, we’re pretty sure that having guilds that can grow to any size is not going to happen.

Tic asked: I have played two MMOs with free form building of player housing. One, some time ago, and one currently. I have found that I tend to design, re-design, scrap, add, and do all sorts crazy, to almost insignificant things to my housing depending on my mood. Some things take a few minutes on a Saturday morn, some may take weeks. Will I need to roll a crafter alt to be able to this in CU?

Major redesigning/building will require the hand of a Crafter, yet there will be many modifications you can make to your dwelling without having to be a Crafter or hire one. Redecorating, and yard design come to mind. We want Crafters to be vital though, so their expertise will be needed for the more involved tasks.

Phyl asked: Will Guild Tabards / Standards be something we can carry into a fight? If so will they be lootable / collectable so I can line the walls of my house, with the Tabards of my enemies?!

Yes, there will be guild standards/tabards that players can proudly carry into battle. Just keep in mind that it may end up in the halls of your enemy if you aren’t too careful!

Oshunsat asked: Need crafters to use something like endurance to build things, or “just” material and time (and obviously skill)?

The crafting system is still being designed, and our current thinking is that we may need to use some stat that serves to keep Crafter progression in line with that of non-crafters.

Mr Selfish asked: Will I be able to make my weapon glow? Particle effects <3.

Endoria asked: It was previously mentioned that solo play should and will be a viable option in CU. How are you going to make it happen?

Mark is a fan of solo play. So, while we can’t describe actual mechanics/details at present, I feel confident saying solo play will be a viable option for those who prefer that playstyle.

Uygar Tosun asked: Is it possible to play with only RvR or crafter characters? or we need to do both to progress?

Yes, you can create and play just a PvP character or just a Crafter. The Crafters and PvP roles are being designed to compliment one another!

Tierless asked: Any plans for tattoos beyond the usual ‘pick tattoo, put on armor, never see it again’?

Indeed! We’ve discussed player designed tattoos and Tim Mills came up with a pretty wicked idea for branding. Not confirming anything, just saying we do in fact have discussions about this and cool things are likely to happen!

Aye and some will occasionally bristle about it. War and their love for Arthur has led them to do things some swore they would not.

Thanks for reading peeps, see you on the forums!