As Summer becomes a not-so-fond memory for most of us, we here at CSE have been hard at work on CU. The title refers to what CSE is, one of the many things we are working on, and one of the things that will be a focus of ours in the upcoming sprint(s). The first word, persistence, is what CSE is, persistence. We keep working on CU, keep adding to the team, and slowly (and not so slowly at times), a game is starting to emerge. The second word, performance, relates to the performance issues with AMD cards that we have been addressing. We’re not there yet but we are making progress and we will continue to work on it till we are happy with it. In terms of progression, that is one of the things that is missing from CU right now, character progression that can also persist (see what I did there? 🙂 ), between weekend tests. We’ve had basic persistence forever, but in the upcoming sprint(s) we want you folks to see your character’s skills improve from server wipe to server wipe. We’re excited to finally get to this stage but that’s the plan for now till we get it in and operating as expected.

Let’s start things off big, with Golems! In the prior newsletter we had shown you the quick concept pass we did to the armors currently in the game to fit the forms of our Golem friends. Here are some updates of those rendered 3D models now!

Starting off with the Arthurian Heavy Armor, which you can find full renders of in the Newsletter! 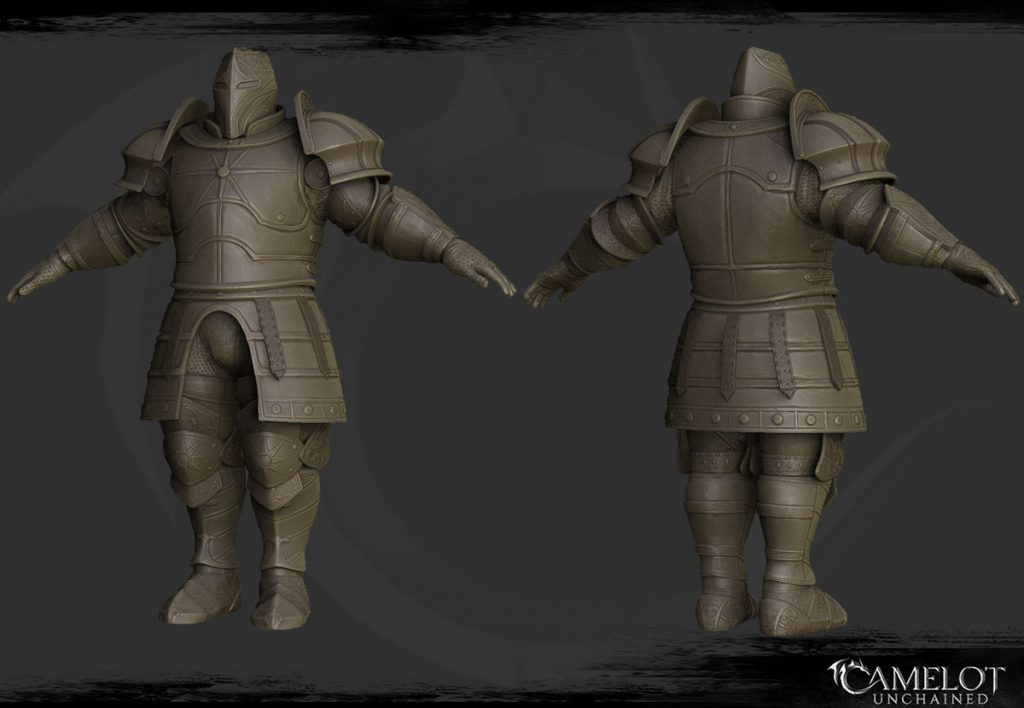 Following with medium armor for the leather those leather loving giants. 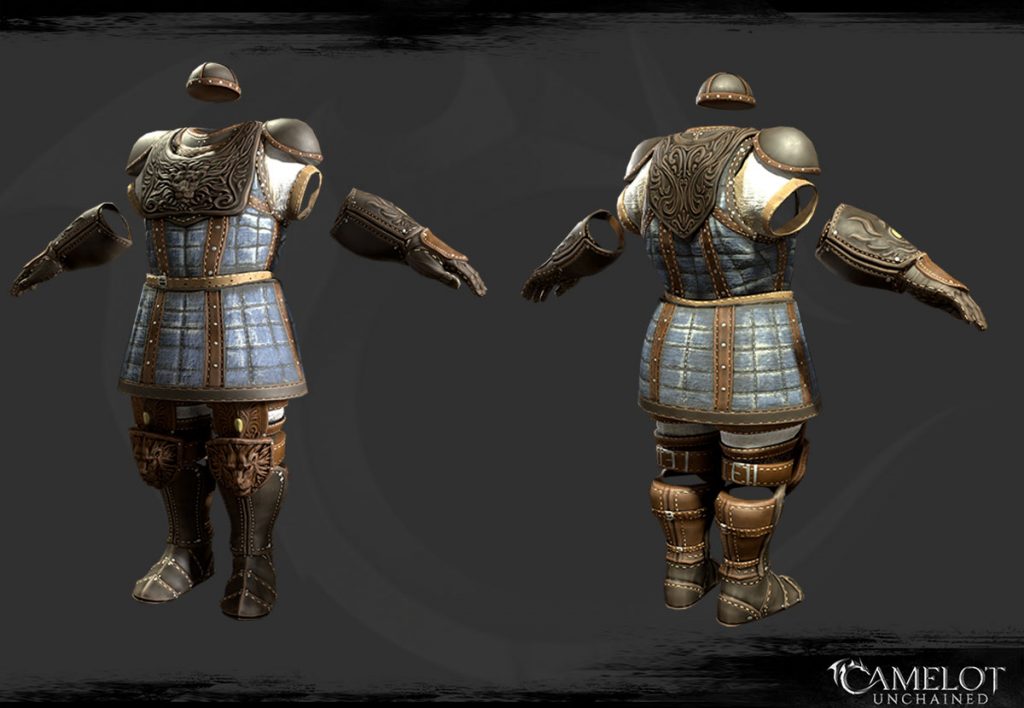 And then here we have a Light Armor option, for those who wish a bit more movement with their gear. 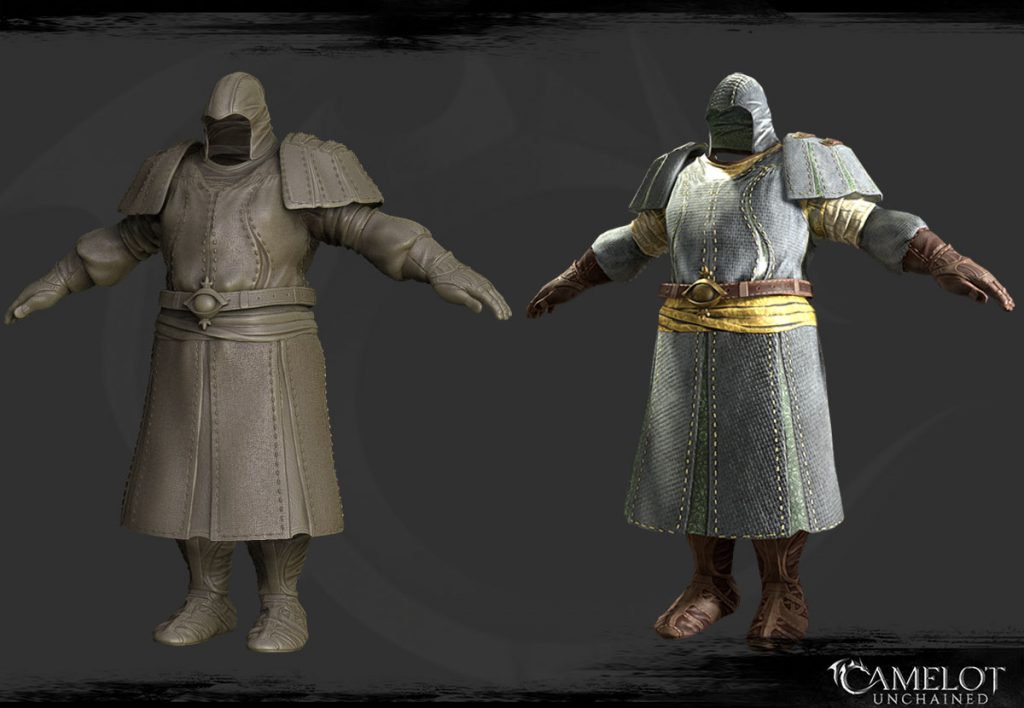 And of course some under-armor, to protect all your fleshy (in this case clay) vital spots. 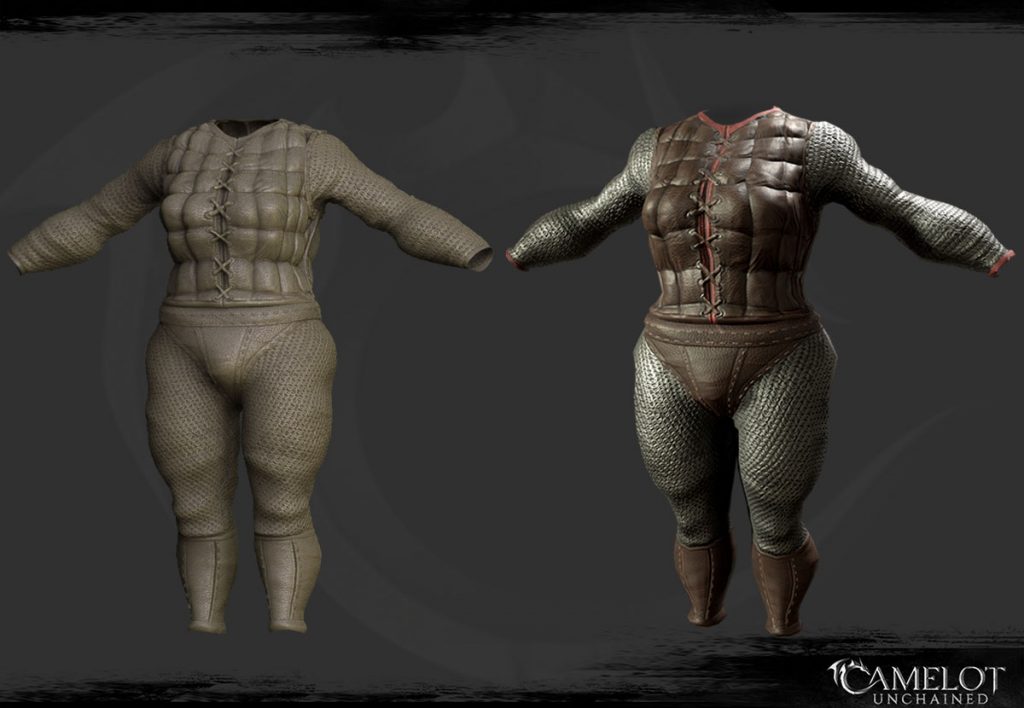 If you recall last time, we brought to you the TDD and Arthurian Leather Barricades, so without further ado; here she is, the Viking Leather Barricade to finish up the long line of realm themed barricades.

When we had concluded last month’s newsletter, I had made mention that we’d dabble into the realm of Spirit Mages, well, dabble we did! Included below were some of the first first concept passes at the Slaughterwolf Spirit Mage. 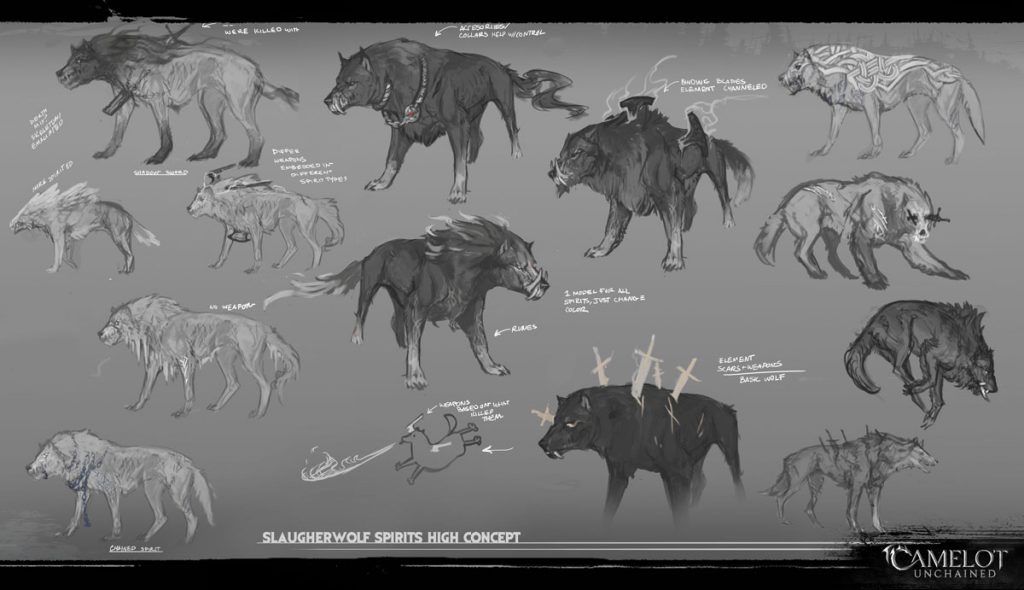 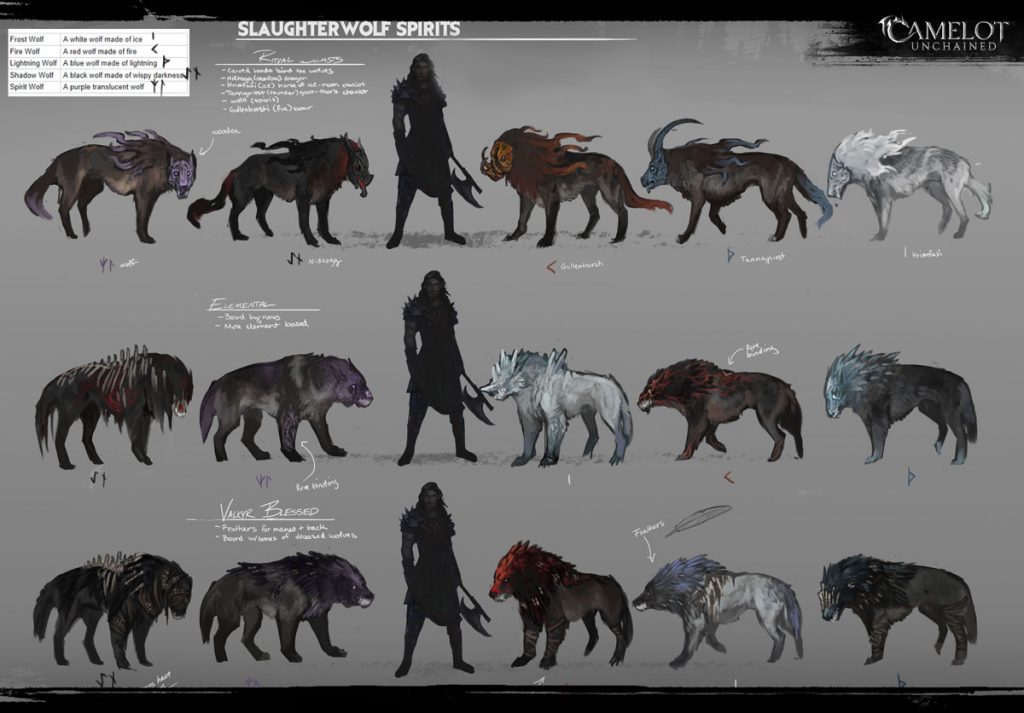 Tinasaurus the Monstrous Modelerbane (Tina) tossed in a second page, just in case we needed more to debate over MORE amazing content; and debate we did! If you’d like to see the awesome finished concept pass, and an inclusion of a little lore, please check out this month’s newsletter! 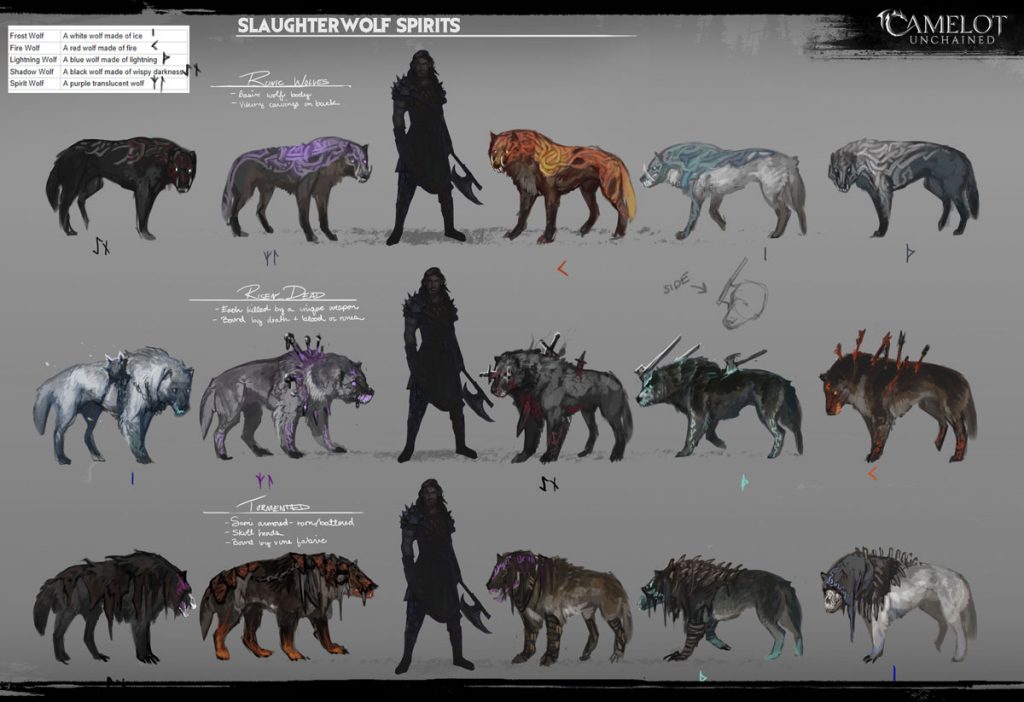 Now we’re just a crows flight away from the Morrigan getting a fully “fleshed out” awakening. Just wait until next month when the rest of this host comes in screaming to your newsletter.

Did someone say UI? Yep, we sure did. The UI updates for classes are getting a polish pass by Koo for bards and devouts alike.

In the home islands, just for some added clarity of portal locations, signs have been added.

We had some assets gathering dust that we attached to the Center Keep giving a somewhat directional focus on realm by realm features. 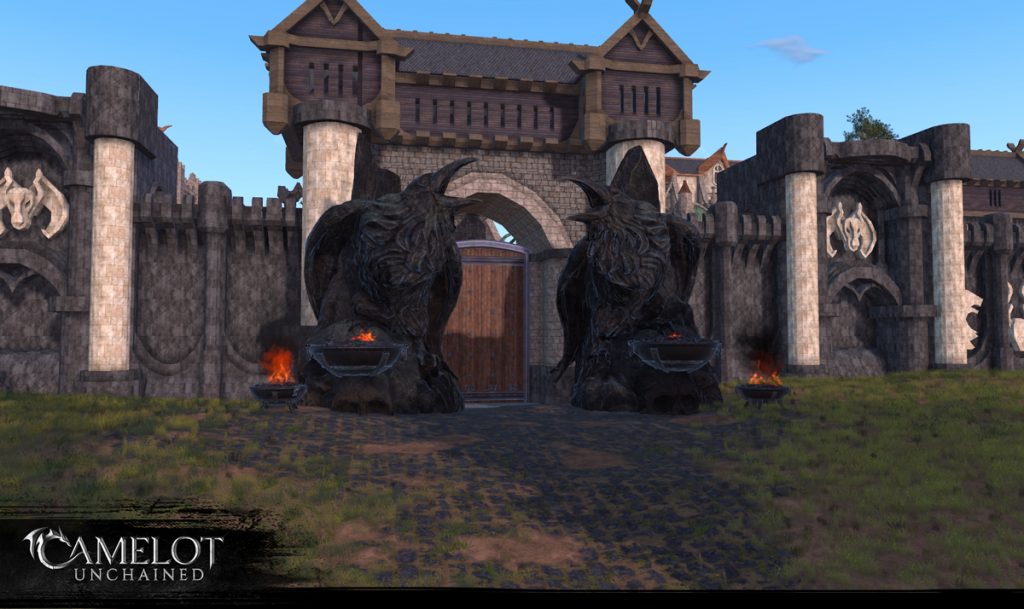 Rocks have been going through the grindstone to have them polish-perfect for the terrain. They’re not 100% there, but progress is definitely close to completion! 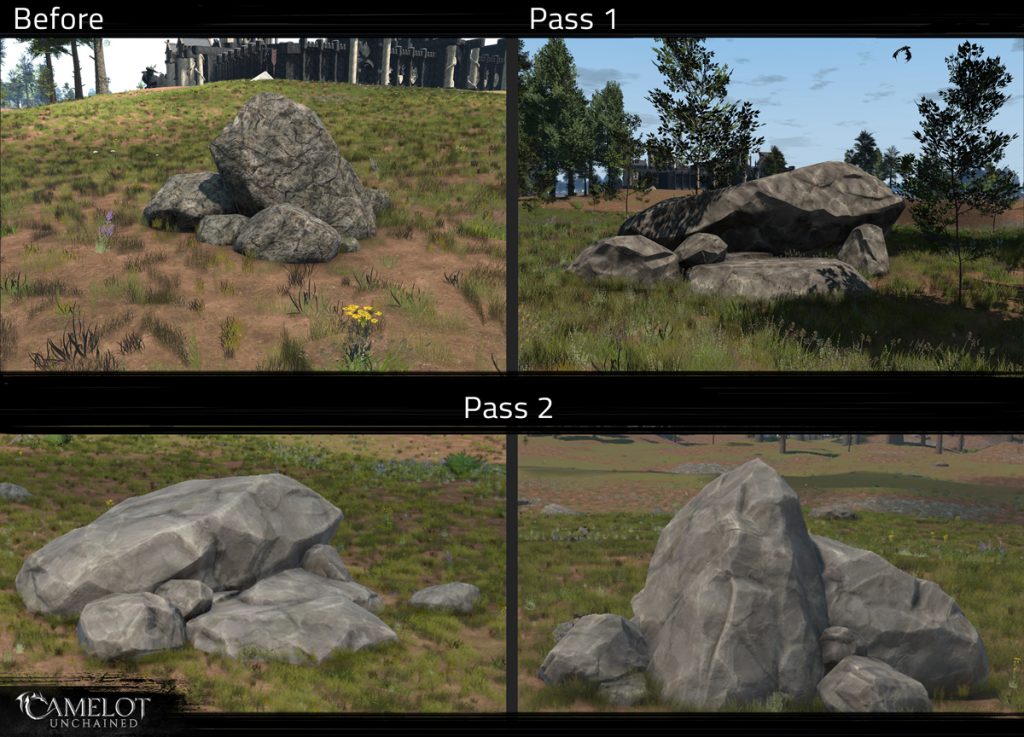 So we know we’ve been talking a lot about our terrain and biome, but we wanted to give you some updated images of progress currently going into this endeavor. Keep in mind, our grass cards are still being worked on with new math going in to better align them for a natural look, but with the development of our trees and new shader tech coming down the pipeline we hope to be adopting soon, we can expect big brush strokes in the coming months. 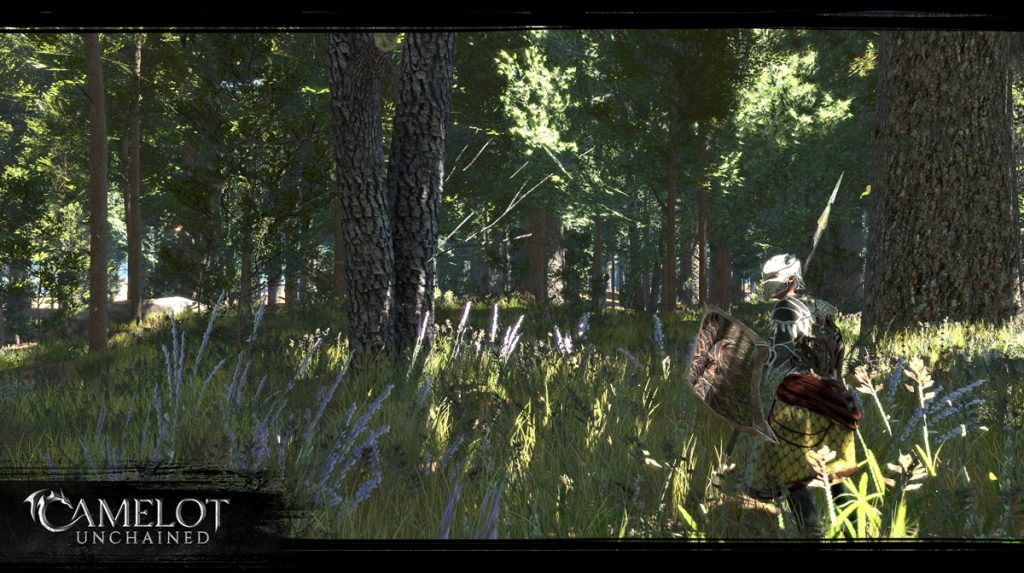 Just to show you how many strides we’ve come from the start, to where we are now: the top image showcases where we were, and the bottom image gives you an idea of where we are now. 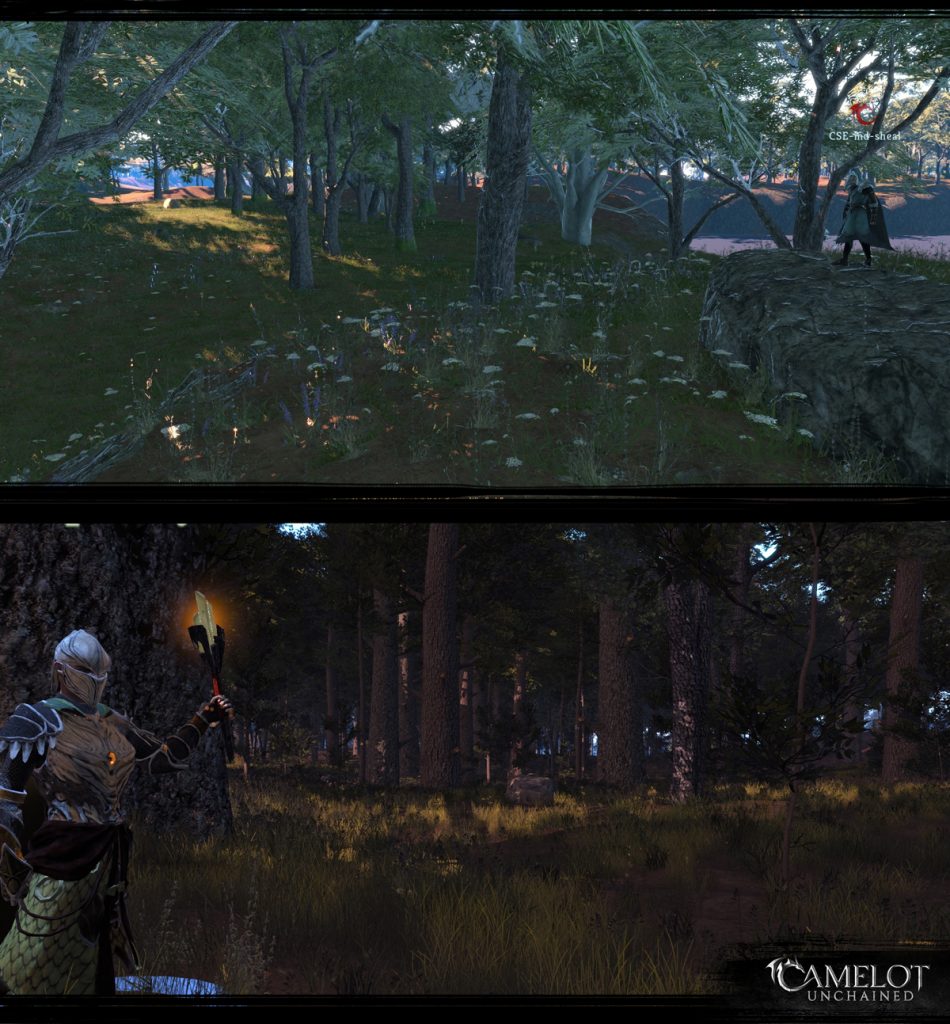 We’ve got it set up here to show you the work that has gone into fixing out C.U.B.E. building content, the image below takes you through the different lighting effects of the day and how the texture pass has been fixed.

And with that from this blast of a month, the art team looks forward to what we will show next month.

One of the things that I’m also excited about is another Builders Brigade masterpiece from Treville. It’s another magnificent creation from him and I hope you folks, especially you Vikings are excited about. Here’s a link – https://www.youtube.com/watch?v=vW0SibgEYNQ

It was a great month and I expect it to be another great month in September, and the cherry on top would be if we can get the additional people to join the team that we’re hoping can join the team. Even without them it will be a great month for the Realms of CU and I hope you can join us for lots of testing throughout the week and the weekend.

As always, we thank you for your patience and support. And, as I’ve been saying since almost all of us have been taking a ride on the CoronaWorld Express, stay safe, stay uninfected, and be kind to each other.