Happy Friday, all! We survived another week of weird January weather (mostly sunny, warm, etc.), and the flu/plague stuff that might be associated with those conditions (at this point, 75% of people here), intact. Even with a less-than-full team here and in Seattle, we still got a lot done, and made some great progress on one of our most pressing needs: a new animation system. With that, let’s get on to our Top Ten-ish list:

As per above, a good week overall, albeit a little lighter than we all would have liked. However, with the progress on the animation system and the ongoing work that has been done on our physics server, a very good week.

Today’s update might be a little lighter on the tech side, but we have lots of art to show you as well.

Let’s start off with something cool and informative from Scott. We have talked about our animation system a lot in the past month, so here’s a tangible example from him. This image shows the plotted trajectory path of the greatsword as it travels continuously through the six parts that make up a full attack animation. 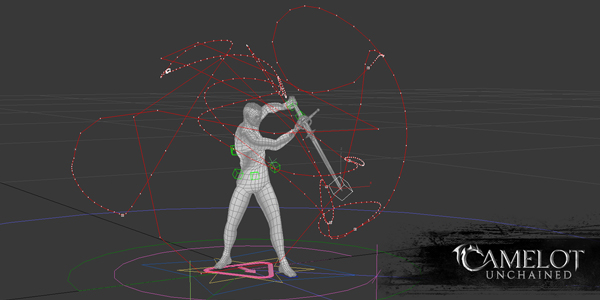 Cool, eh? Swinging a sword is a little more complicated than you might have thought.

Now, let’s talk trees. Big trees. Like really big trees. Our goal with our “deeper darker” forest is to expand upon the initial forest, which was very dense, yet supported several hundred bots/players within it. This forest variation will be at the center a much vaster forest, and will have much larger, older trees, supporting different types of gameplay. The assets we build for this section of the forest will be more easily re-purposed to create more than just this one biome. That’s the plan, at least! Michelle’s concept art included in this update should give you an idea of the visual direction. First up, some flora. And Michele lands a combo! All of the following images are true works in progress (WIP): 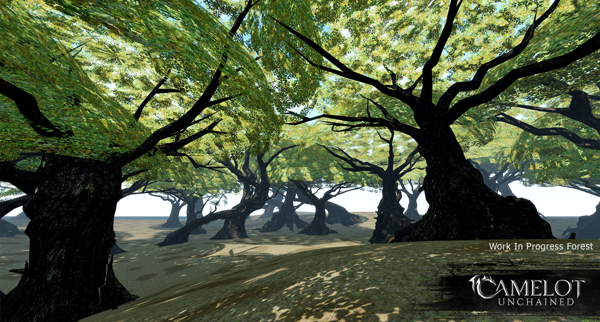 Okay, but I know what you are thinking: these are “prop” trees, right MJ? You really can’t do anything on them, right? 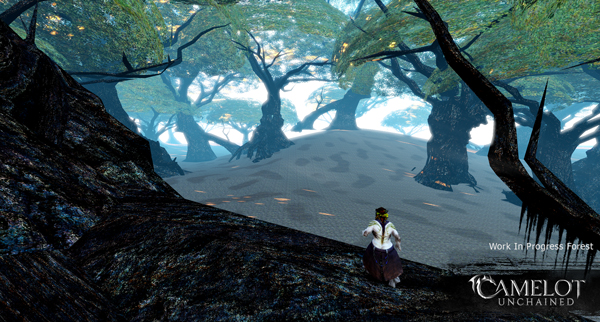 Eeeh! Sorry Hans, wrong guess. Would you like to go for Double Jeopardy where the scores can really change? And since I said double… 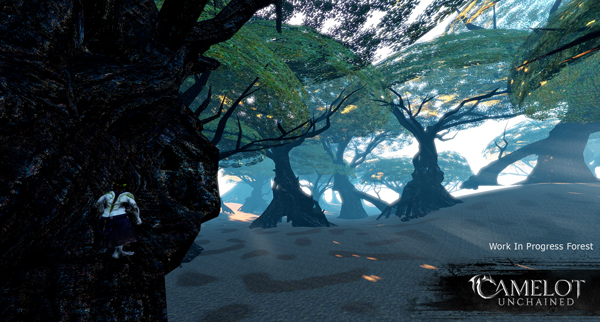 Here’s a look at a number of them. 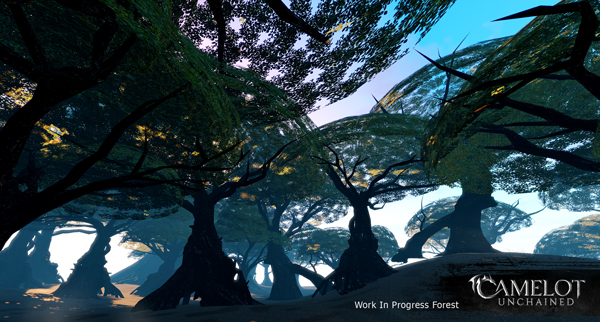 Look at those tree trunks and how the leaves picked up the lighting. 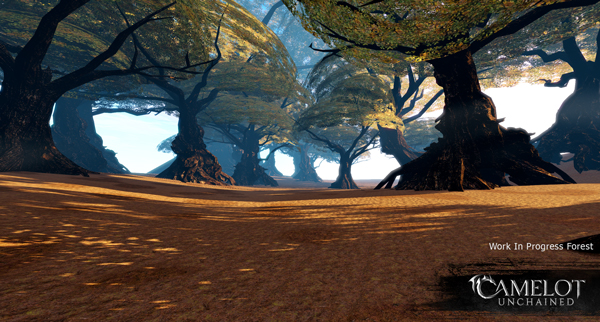 Now, those trees are great, but even though they are WIPs, they are still missing something. Not sure what. Maybe this?

And how about some WIPs for our latest Place of Power. Let’s start with a simple shot: 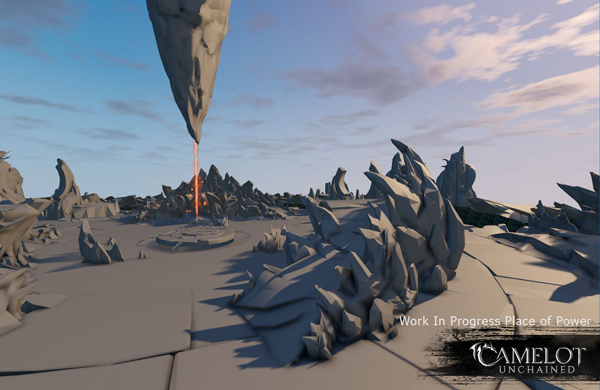 How about from a different angle, the Tuatha Dé Danann perspective, plus a giant floating rock? 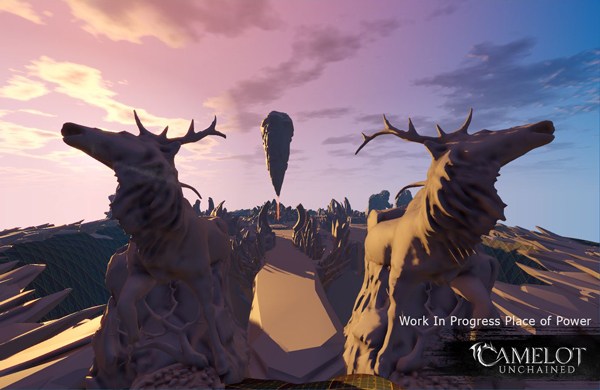 Let’s segue to night and a look at the Viking side with a little bit of snow falling. 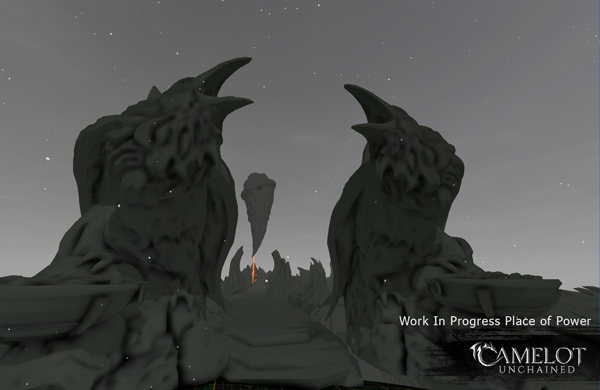 It’s a start. Here are a couple of environmental images. This one is pretty handy!

Now, stop laughing, please be still as a… 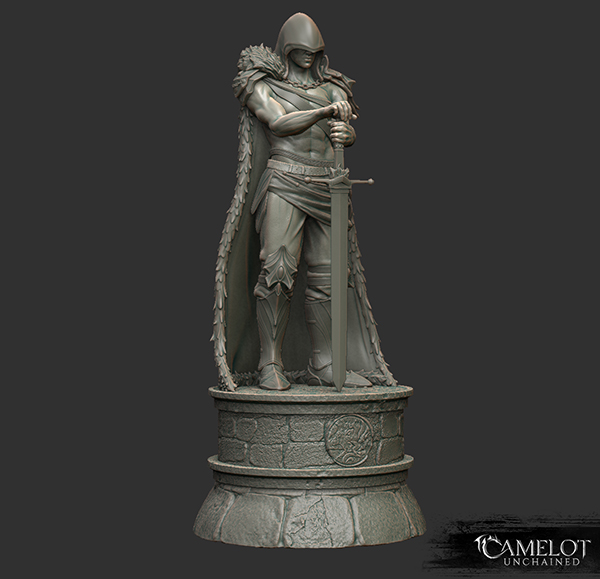 Over the last two years, we have talked about how C.U.B.E. and the building portion of Camelot Unchained was not going to simply be a Minecraft clone. One of the many ways we are fulfilling that promise is by allowing players to create and use round objects. This work-in-progress image shows our building morph technology being put through some tests. It is a cylinder morph around the Z (vertical) axis. Then another cylinder morph around the X axis was added, which combines all the changes of the original morph with itself. The result is that you get curvature around two axes. It’s definitely a WIP, but you can see how close we are getting to the point of bringing this to life inside the engine. 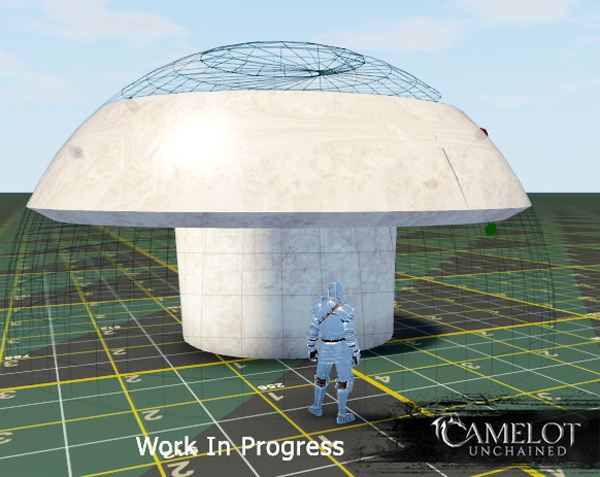 So, lots of good stuff for you folks. Let’s end today’s update with a piece of art from Sandra that sums up the last few weeks at CSE most eloquently! 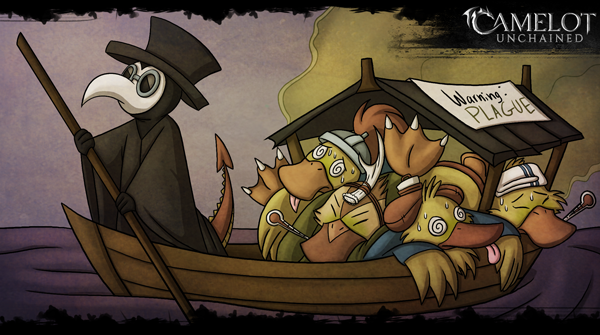 As always, we thank you for your patience, support, and putting up with my bad puns. As I announced on the stream, we are going to be running a closed IT test this weekend on a major new version of our patcher, so we will not be testing anything else. Next week, though, we hope to push the patcher out to more tiers, and to have Andrew begin the push of his code branch with the WIP animation system. Please keep your fingers, toes, and wings crossed!

P.S. ORing in the title is not a typo, it’s a bad but somewhat clever pun, as it is based on both the word “oar” (which Charon uses) and the bitwise operation “Or” and its many uses in math and computer programming. For more info, head here – https://en.wikipedia.org/wiki/Bitwise_operation