Sorry for the delayed update, that’s on me and my infamously bad back and me doing something dumb – like picking up a big box from Amazon which unexpectedly contained bottles of water. With October coming to an end and the leaves dying in bunches, it’s comforting to know that we are doing the exact opposite, as we continue to move Camelot Unchained ever forward. This month there’s a first in-game look at the Frozen Tundra biome, and a whole lot more. And again, sorry about the few days’ delay. I can honestly say it hurt me way more than it probably hurt you. 🙂

First up we’ve got quite the inventory of Realm Artifact concepts: that is, the architectural features like lamps and flags that players will eventually be able to find around the world of CU indicating which realm controls that area.

Here you can see a variety of options for different realm bridges:

And here are some realm flags, which will likely share a main flagpole but whose heraldry will change (and let you know if you’re free to saunter into town, or beat a hasty retreat).

Along with the braziers below, these light posts are crucial to navigating the often treacherous roads between settlements, and may tell you which routes are best to avoid. (Good thing your torch doesn’t play favorites – we hear that forest is deep and dark.) 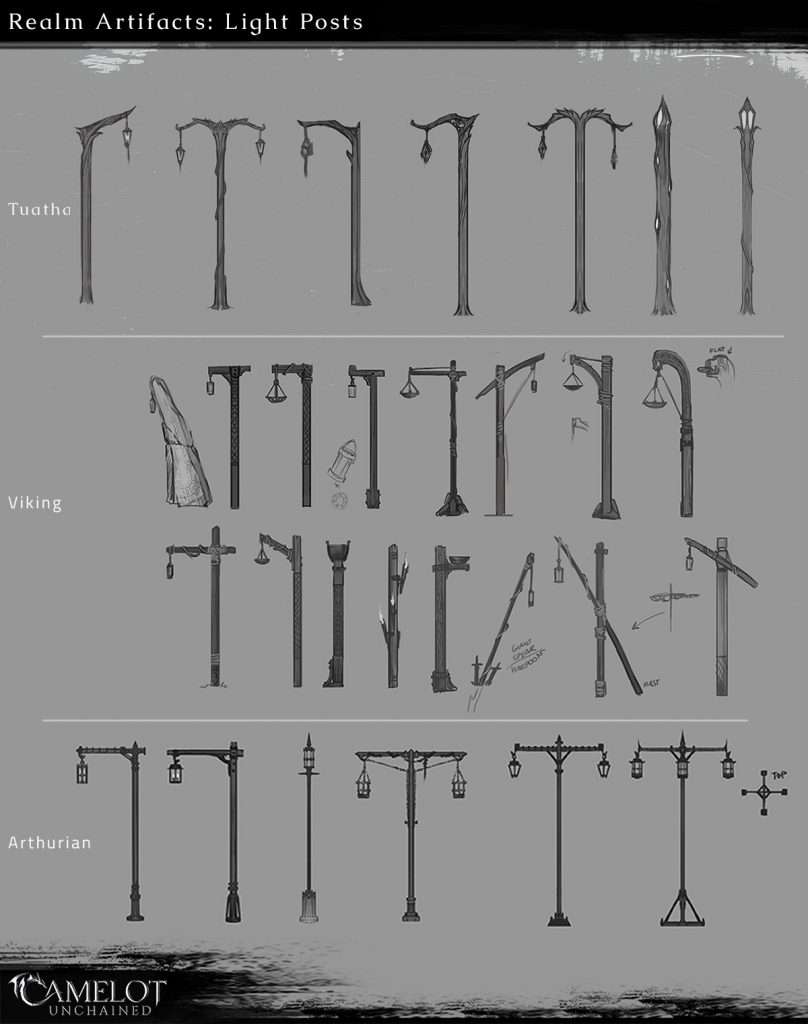 Finally, to finish off our current slate of artifacts, what’s a realm without an emblem? These beastly works of art would be found throughout an environment to inspire allies and strike fear into enemies. They also make for a handy landmark.

From artifacts of the realms we move to the realm itself! This month we’re happy to unveil the first pass of the Frozen Tundra biome, which also happens to be the main biome for the Vikings on the Veilshards (a.k.a. RvR3).

New this month and with updates on the way, this build lays the foundation for the immense mountain ranges and extreme elevation changes integral to the character of the biome. As such you’ll be able to see (and, in some cases, traverse) extensive rock and cliff formations arranged to provide each realm a unique entry point into the environment.

The Tundra is a desolate landscape: hardy shrubs, thin pine trees, and some wily wildlife (which you’ll be able to hear in our next test build) are just about the only life able to survive in such a frigid climate.

Pictured: the Happiest Viking, celebrating the arrival of the third major realm biome and first Viking-affiliated biome. We feel you, buddy.

But that’s not the end of the Viking gifts this month. Here you can also see the current phase of concepting on a new Viking set of Heavy Armor, bringing them in line with the other two realms in armor set distribution.

Finally, we’ll end our usual romp through Top Tenish Art-Land with the craftiest addition to this next test build: the Alchemical Harvest Tent! Be sure to check out the market square on your respective home island – and make sure you’re out of Travel Stance – to use these new tents and start your foray into the Alchemy branch of the crafting tree.

Click the Harvest icon on your ability bar while you have the tent selected to grab the reagents you want, deploy your Vox, and craft, craft away! For more detail on the alchemy system and what’s included in this next test build, feel free to check out this month’s newsletter.

I hope you enjoyed your look at what transpired for CU this month and are excited to play around in the new biome, mess around with Alchemy, and see the good stuff in the newsletter. There’s some really cool stuff there as usual.

Please stay safe during what remains of this pandemic. We do finally seem closer to the end, rather than the beginning, but please be smart, be careful, and be considerate of others.