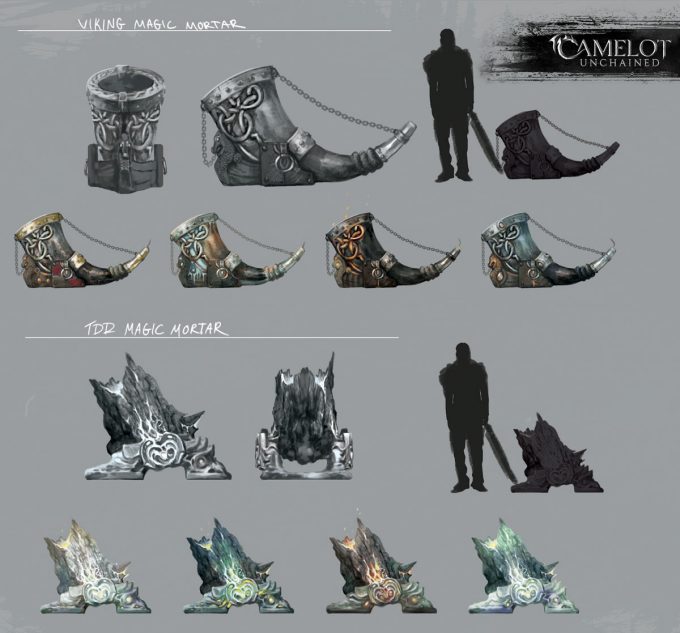 Wow, this week went by fast! I’ve had several people say this to me as the week came to a close. I think it’s because everyone is working so much, and on multiple projects at once, as is common with a small studio. I, Tyler, work primarily with the artists, where we’ve been bouncing between fixes and improvements to the new character art while at the same time making mage weapons, reviewing concept art for magic mortars, and working on BPOs (Building Placed Objects) and mage abilities. While the folks in Seattle were trudging through the snow or, in some cases, working from home (or not, if they didn’t have any power), we all still managed to get a lot done this week.

On the engineering front, as mentioned, we’ve continued work on BPOs, siege scenario mechanics, improved ability system changes, and more! This all reminds me of waiting tables on a crowded evening… You’re so busy, then bam, suddenly the evening is over and your feet hurt!

We are not planning on a test this weekend. Stay tuned to our tentative testing schedule next week for further testing.

If you missed today’s livestream update and Q&A, you can find that HERE.

In terms of art this week, we start off with a WIP concept of the new ability builder UI. It’s created based on the concept of a kind of spellbook where you can create your own abilities. This is vastly different from the original that some of you Backers may have seen, and definitely way cooler-looking! The left side is ability type selection, the first page in creating an ability. The second is the main building page for a given type, where you select components and options for the ability to create.

Next up, we have the new live scoreboard UI for scenarios. This will be accessible during the scenario, and you won’t have to wait for the final results to see who’s top dog!

While we’re in the land of concept art, let’s take a look at the Magic Mortar concepts. First, we have the approved Viking version on top, and TDD on the bottom. We’re still working out the look of the Arthurian version, which should be figured out in time for next week’s update!

During this week’s live stream Q&A, Mark goes into a little more detail about the magic mortars. You can catch that HERE.

Lastly, we have the female TDD Fir Bog model from Jon. You can see the male version, with the male Arthurian Golem (another giant) HERE. As mentioned previously, we’re working ahead on the giant models for later implementation.

And so ends this week’s update from your ever hard-working CSE crew. We’ve got a lot of cool changes coming up, and we’ll be excited to see you on the battlefield in a test!

Have a great weekend all, and CU next week!