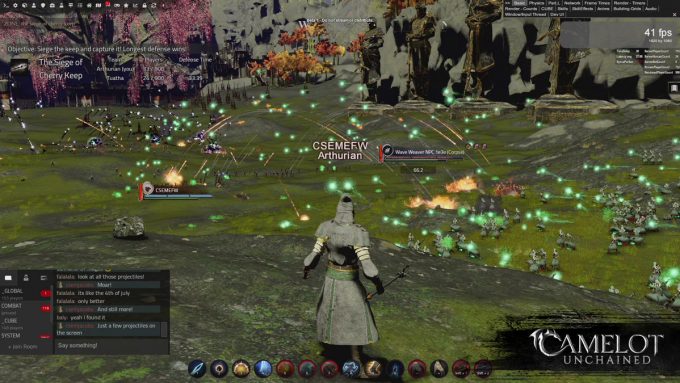 Welcome to the end-of-the-week update from your hardworking team at CSE! We’ve got a lot going on right now in the studios, so let’s jump in, shall we?

Starting off, we’ve been doing a lot of testing today with Backers up to Beta 2 joining us in our WIP siege scenario. And frankly, for a work-in-progress, it is utterly astounding! The feedback from Backers jumping in and seeing this, some for the first time, is really great! This build, with over 200 trebuchets and over 800 other siege engines and NPCs, continues to be iterated upon by several team members, looking for ways to further optimize things. As you can see week-to-week, we continue to push the envelope of what an MMO–and our engine–can do!

Additionally, some members of the team spent the week looking ahead and planning new features and improvements to our siege scenarios. We’ll have more info on that over the coming weeks, but you can get a hint at that work in the Top Tenish, below.

On a third front, for those not directly involved in the siege scenario work, we continue to push forward on other exciting features and assets. To name a few standouts: we’re working on the support class abilities, some really great-looking new UI elements (which you can see more of below), as well as new ability system functionality like infusions, also mentioned in the Top Tenish.

So yeah, you might say we’ve got a quite a few things going on right now, in an ever-improving engine no one can touch in terms of large-scale battles!

If you missed this week’s livestream and Q&A with Mark, you can catch that HERE. For this week’s highlights, let’s jump on over to our Top Tenish list!
Top Tenish:

Like I said above, we’ve got a lot going on right now. Though I’d be hard-pressed to remember a time we didn’t have a lot going on!

For art this week, we start with a couple of images from Scott, who is working on the updated one-handed weapon combination animations. The first image illustrates the subtlety in the various poses that we try out for our equipped weapon idles. We did a bit of YouTube research looking at HEMA (Historical European Martial Arts) videos of people dual-wielding swords to get started. After that, we add a bit of artistic license to accentuate the pose, and add a bit of aggression to it. For the first idle, we’re using the pose in the center of the first image, with a better shot of it in the second image. Our goal is to have a different idle for each Realm to help further differentiate players at a distance.

Next, we have some really nice work from our UI guys on the WIP Orders UI.

Empaths will soon have a new gauntlet focus item. Here’s a few concepts of this item that we’ll be modeling soon.

When not working on the siege scenario, I, Tyler, have been trying to update some of the old terrain textures and add to our library. One thing we were missing was some good roots for our pine forest!

Also, we’ve got some great concept art for the board game with this scorpion-like monstrosity, clearly straight out of The Depths.

And an update wouldn’t be complete without some unretouched (other than the watermark) screenshots of the build from us. You want to see what you’ve been missing in our tests? Here you go:

First up: On a clear day, you can see a whole lot of mages and friends.

Green is a nice color, but Mike C delivered a nice touch for our chaos users.

Got milk? Nah, but we have chaos mage spam!

Let’s bring some light to this subject…maybe a bit too much light.

A bit bright. Let’s take a step back and see how a large siege could start in Camelot Unchained.

Many thanks to our Rich Creepy Uncle, who sent both offices a fantastic pizza lunch today! Many thanks for the lunch! As you can see, I thoroughly enjoyed it! (Hint: that second image is me, Tyler, after too much pizza.) Thanks so much!

And with that, I hope you enjoyed our regular, and always honest, peek into the week’s goings-on. If you have not yet had a chance to join us in one of these siege scenario tests, keep an eye on next week’s tentative testing schedule. As you can see from our previous coverage and screenshots, it’s really impressive to see a lot of our core tech coming together so well!