Let there be lights, lots of lights!

Happy Memorial Day, in advance, to all our Backers in the US! With the one-day break coming up, we have another great update to share with you. Let’s start with Andrew’s return from Seattle after a great week with the team out there: lots of stuff got done, important conversations occurred, etc. The results from that week are already being seen in the game build. Besides that, the last two weeks of work have resulted in a whole heaping helping of User Stories and new stuff for you folks. So, let’s get right to our Top Tenish™ list:

As a Backer, I’d like to know about smaller changes that don’t have their own user story.
Setup server entities to handle multiple shards. – Complete
Only load gameplay defs from cog DB once. – Complete
Make startup tasks that use loaded gameplay defs actually wait for gameplay defs to be loaded. – Complete
Clean up server startup logging a bit, and add a new console appender for only coloring errors. – Complete
Set camera position and copy location from console. – Complete
Introduce euler3f and facing2f structures to math library. – Complete

As a Backer, I’d like to see the world of Camelot Unchained continue to develop through its lore.
Silverhands Becoming – Part 1 Final Draft – Complete

As a Backer, I want to be able to own a plot of land and build within it.
Add more commands for players – reorder queue, remove queued blueprint. – Complete

As a Developer and Backer, I’d like to see improvements in memory usage and threading.
Terrain rethreading changes to use pooledContexts. – Complete
Change how we raycast gizmos to not hold the scene lock as long. – Complete

As a Developer and Backer, I’d like to see improvements in lighting and rendering.
ParticleResources pre-cache the GPU particle def for every particle on load.  – Complete
Particles only update the parameters that are animating. – Complete
Refuse to load particles that appear to have internal data alignment issues. – Complete
Improve particle Draw on Ryzen architecture. – Complete

As a Backer and Developer, I’d like some temporary vfx for testing new combat mechanics and tech.
Second pass wall torch VFX. – Complete

As a Developer, I’d like to see improvements in the editor to facilitate my work.
Async load particle and spawners. – Complete

As a Backer in Beta 1, I’d like to have a sampling of Arthurian light, medium, and heavy armor to wear in game.
Create additional heavy to medium helmets for B1. – Modeling and Mats. – Complete

As a Backer in Beta 1, I’d like to have a sampling of TDD light, medium, and heavy armor to wear in game.
Create additional heavy to medium helmets for B1. – Modeling and Mats. – Complete

As a Developer in Beta 1, I’d like to see improvements in the ability system’s stability and robustness, as well as make it easier for developers to work with.
Split SkillComponent into SkillsKnownComponent and SkillQueueComponent. – Complete

As a Backer in Beta 1, I’d like to be able to pick an item up off the ground, put it in my inventory, and if applicable, equip it.
Delete ammo right when it is used, but keep the item within the projectile object to maintain stats knowledge. – Complete

As a player, I want to view a character UI that shows me my stats, allows me to swap out my equipment, organize my inventory, and see my collection of crafting resources.
Setup dynamic generation of GraphQL types to easily add any remaining types for items/crafting to the API. – Complete

As a Developer, I’d like to have a clear visual design for the UI of Camelot Unchained.
Beta 1 version:
Third pass health bar styling. – Complete

As a Backer in Beta 1, I’d like the updated encumbrance system to use an item’s weight and compare that to the stat-driven carrying capacity of my character.
Recalculate and reapply encumbrance active effect on relevant actions. – Complete

As a Backer in Beta 1, I’d like to hear ambient Realm-based music during loading island transitions.
Generic ambient track #4 – Complete

As a Backer in Beta 1, I’d like to use a siege weapon.
Create SiegeEngineEntity when dropping an item that represents a siege engine. – Complete
Prevent pickup of in-use siege engines. – Complete
Add basic orientation to OnGroundItemLocation. – Complete
Support sending input to server from either a player or a siege engine entity. – Complete

So, a good haul this week! With all those details finished, and for those of you who may have scrolled down to the pretty pictures, let’s hit up art!

Starting off this week, as we have with our last several updates, we have a new WIP animation video from Scott. For context, last week we showed you a bigger “lifted” knockback animation.  As part of our focus right now to improve the animations, we’ve found more variety really adds the spice of life to player movement. This week, we have smaller knockback animations, which can be used as a variation depending on how hard of a knockback a player is hit with. Click the image for the video! 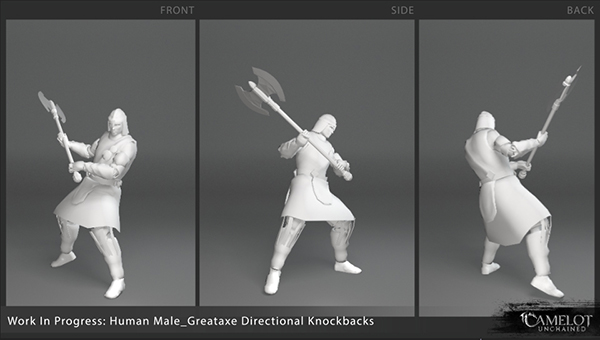 Not to be left out, Sandra has been quietly working on polearm animations in the background. We’re not yet ready to show off the specific clips, but for now, here’s a teaser of a female Viking Valkyrie, in light armor, holding a bone atgeir, or mail-piercer spear. 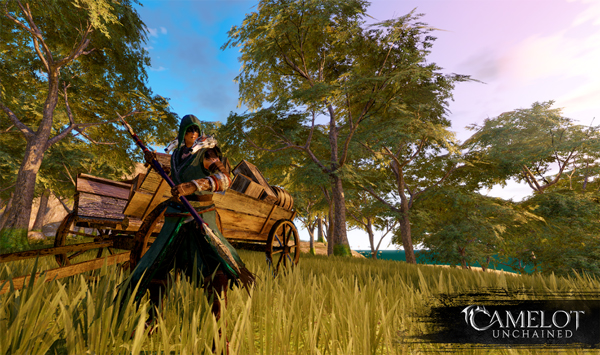 Next up, we have a selection of WIP TDD helms from Jon this week, shown with and without materials. 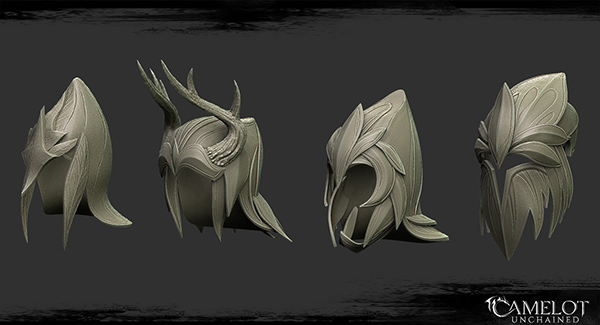 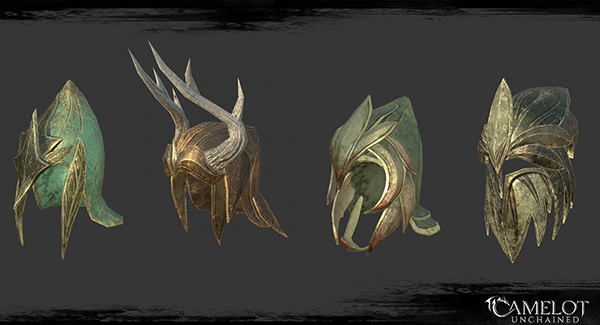 Next up, we have the results of our most recent UI health bar review from Michelle. Remember this is still very much a WIP, and will, of course, change depending on testing and feedback. 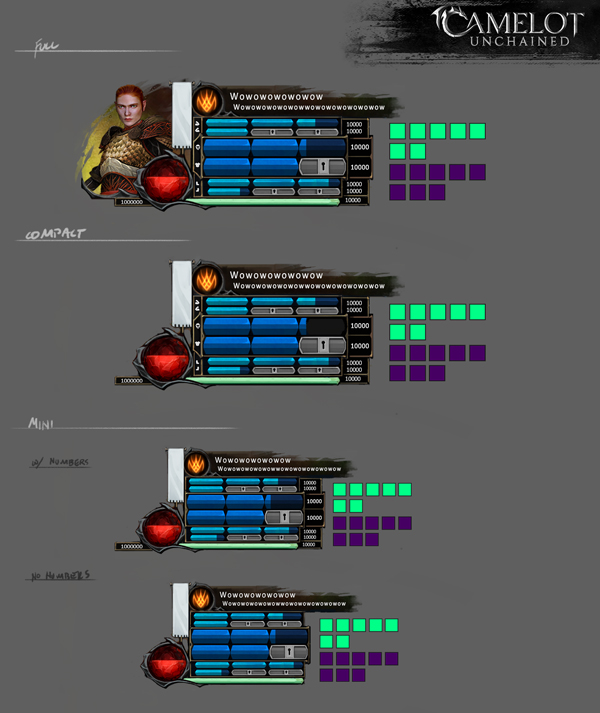 For a couple of months now, we’ve been adding more to our VFX performance, and adding in more functionality to the VFX editor. We’ve also found a good use case for some of Andrew’s time-saving animation tech by setting new animations for holding a torch as overrides to existing anim sets. Last week, Michelle and Jon had a conversation about adding in some Realm-specific torches to show better distinction between the Realms. While checking out Michelle’s quick sketches, think about cool ways we could use different types of torches in CU! 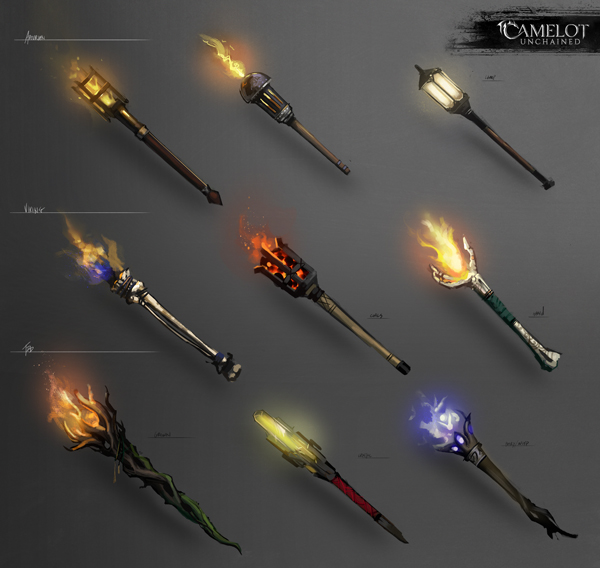 Rounding out this week’s update, we have a couple of great images from one of our C.U.B.E. Builders, Swazi. You can catch his most recent livestream HERE. 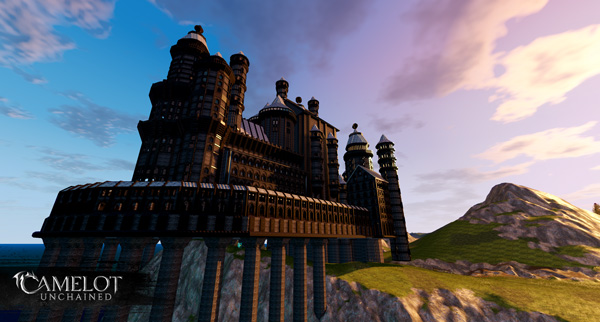 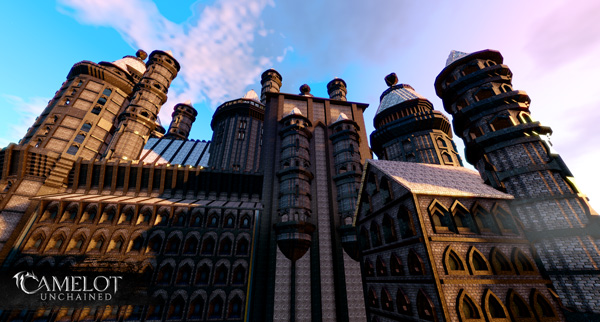 And here, we also have a lovely frame and inspirational quote sent to us by the amazing Backer known as Poxer! Thank you, Poxer! 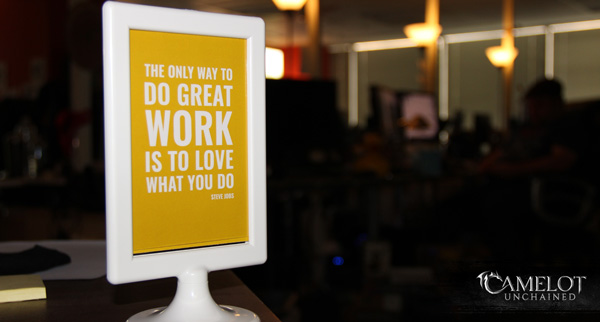 As to testing this weekend, as I said during today’s stream, and as our User Stories reflect, we’ve added a lot of new code in the last two weeks. I am sorry, but the current build we have is just not stable enough for Alpha testing, but we will leave Hatchery up over the weekend for our IT Backers. The big things for them to look at are in our building systems, so please take control of plots, build, and destroy blocks and let’s see what happens. We’re expecting some growing pains with this build, so don’t be surprised if something bad happens and Hatchery isn’t restarted over the weekend. We should be good for some testing next week, though as always, time will tell. 🙂

As always, we thank you for your support and patience. Great things are coming sooner, rather than later.