Layers are not just for onions and ogres!

Another great week here at CSE. Work continues apace on the game and our push to Beta 1. And as you folks can see from today’s User Stories, more gameplay features are going into the game on a weekly basis than in a very long time. OTOH, we are also continuing to focus on our engine’s performance and capabilities. As usual, let’s start with the Top Tenish™ list.

As you can see, more and more, our engine is beginning to resemble a game. As part of this evolution, we are checking off item from Primary Beta 1 list: “First pass working armor, shields, and weapons in game.”

In terms of our User Stories, they are even clearer in terms of the transition to more gamplay-focused development:
20 Old cards with 52 completes.

As a Backer, I’d like to play in new biomes that change according to Realm ownership. – Biome 06 – deeper darker forest.
Unique tree root model. – Complete

As a Backer, I’d like to know about smaller changes that don’t have their own user story.
AssetCache works via MD5 instead of CogID to prevent asset conflicts. – Complete
Fast Entity Reader implemented to improve server performance. – Complete

As a Backer, I want to be able to own a plot of land and build within it. – First Pass
Each Grid/Morph has a location in the world, giving us a direct relationship between world space and grid space. – Complete
Start building mode with a selected block. – Complete
Set Shift+Tab to cycle selected blocks. – Complete

As a Backer, I’d like to see graphical and networking performance improvements, when building and destroying structures.
Serialization: update how buildlings are saved out to disk and the database. – Complete
Improve how we send out deltas/building changes over the network.   – Complete
Caching building bounds on the server. – Complete
Threading update: Break segment building on the client out into 4 contexts. – Complete

As a Backer and Developer, I’d like a system to set sounds to play during specific events.
Offset sun angle RTPC by 90°, so midnight coincides with 0°/360°. – Complete

As a Developer and Backer, I’d like to see improvements in lighting and rendering.
Investigate OIT (Order Independent Transparency) as a solution for rendering improvements. – Complete
First pass testing and fixes. – Complete
Improve lighting between dark and bright areas. – Complete

As a Backer I’d like a patcher to not only update my game, but also give me the most important news and updates, get support, chat with the community and look awesome while doing it!
Chat: Reconfigure log4net logger. – Complete
Deploy new patch server in preparation for combining default and experimental patchers. – Complete

As a Developer, I’d like to see improvements in the editor to facilitate my work.
Add dropdown box to select the bone on the model to attach the effect. – Complete

As a Backer in Beta 1, I’d like to play as a Crafter with basic gathering and crafting mechanics for testing.
Resource Nodes:
RNs Save to the DB when updated, so they will correctly startup after a server reboot. – Complete
Resource nodes can take damage and track health. – Complete
Add slash commands for quickly testing node functionality. – Complete

As a Developer, I’d like to have a selection of weapons that visually represent each Realm’s identity. – Arthurians
Polearm v1 – Complete

As a Developer, I’d like to have a selection of weapons that visually represent each Realm’s identity. – TDD
First Pass Concept Art: TDD polearms. – Complete

As a Developer, I’d like to have a selection of weapons that visually represent each Realm’s identity. – Viking
Polearm – v3. – Complete
One-handed “epic valentine’s” axe concept. – Complete

As a Backer in Beta 1, I’d like to be able to pick an item up off the ground, put it in my inventory, and if applicable, equip it.
Armor:
Update UI to reflect recent gearslot changes. – Complete

As a Backer and Developer, I’d like to see increased visual fidelity and improved performance in the dense test forest.
Adjust specular to prevent dark forests from looking overlit from outside or underlit inside. – Complete

As a Backer in Beta 1, I’d like to be able to further personalize my character through the use of the Banes and Boons system.
Metadata and testability improvements:
Traits endpoint in web api server to enable character creation UI. – Complete
B&B Icons:
Races. – Complete
Classes. – Complete
Standard. – Complete

As a Developer, I’d like to pull the physics server out to its own process for improved network performance.
Set Jenkins to build PhysicsServer code solution. – Complete

Another great two-week update from us, more updates like that one are coming, that I promise you.
In terms of this week’s “purty stuff” from Artland, sometimes art discussion require a bit of really quick sketching to convey an idea. Take this lovely “sketch” (and calling this a sketch is like calling what I did on today’s stream, singing), Tyler gave Jon when trying to convey what he needed for a unique tree asset. Not much I know. I’m told there was some awkward miming involved as well. 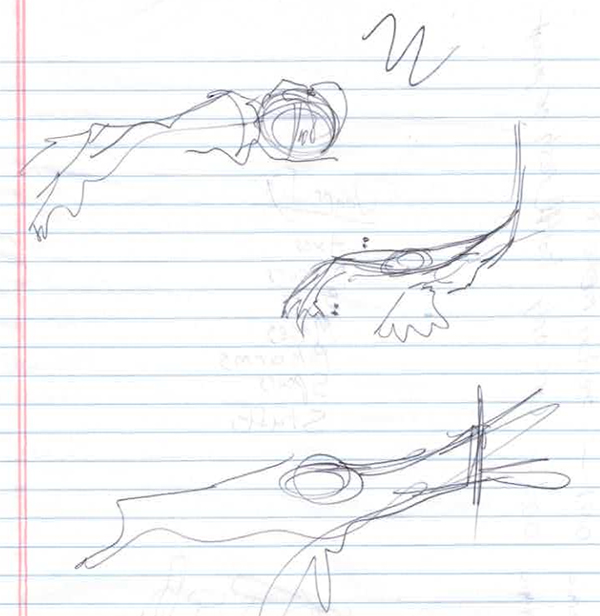 With that loose “sketch,” and the power of talent, Jon created this awesome piece! The plan here is to append this to a unique tree in the next forest as a root structure coming off the side. 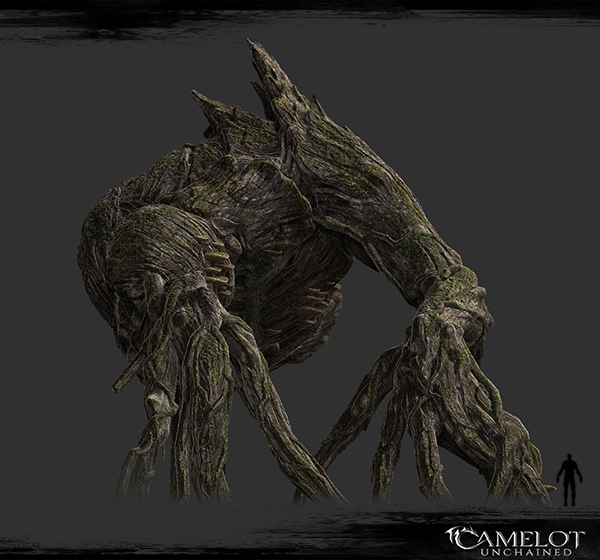 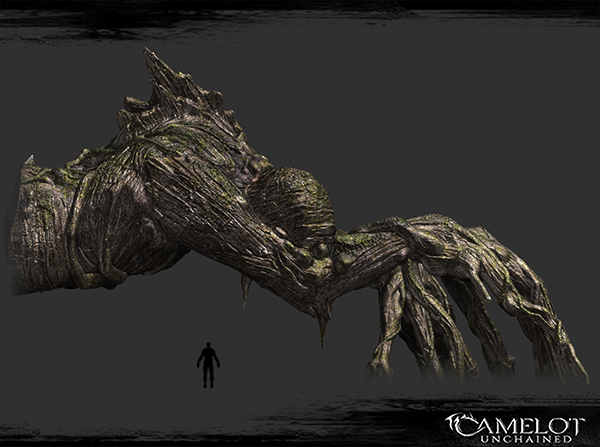 Last week we showed you the quick TDD polearm sketches Michelle completed. This week, we chose two to create, which got an extra concept pass before going to the modeling and materials phase. 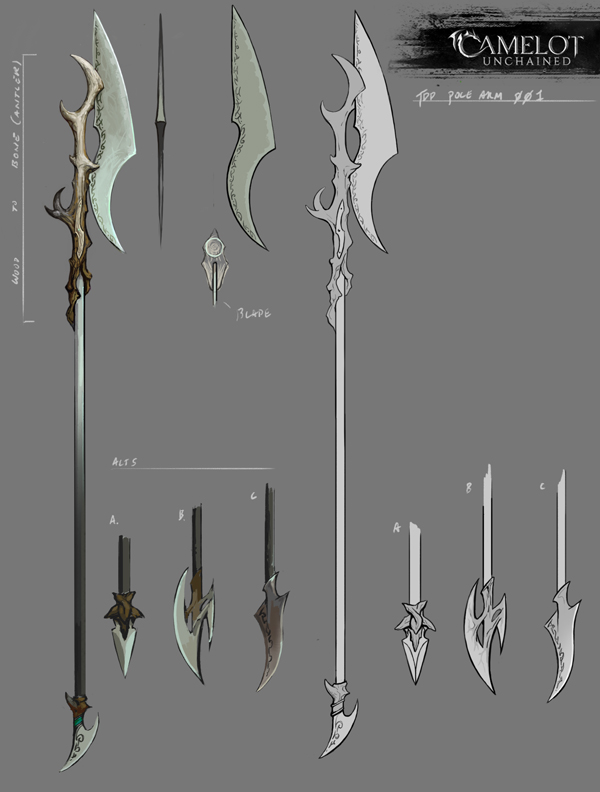 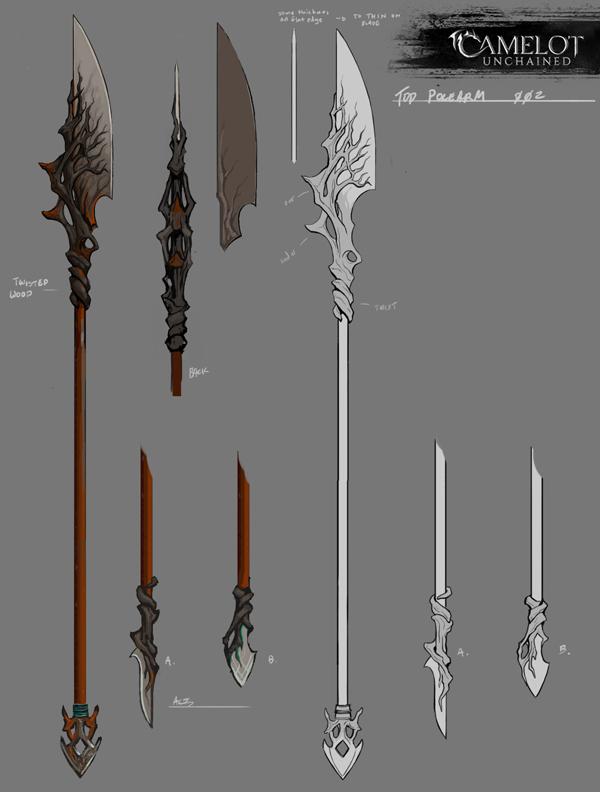 Not to be outdone, we resurrected our old Viking polearms with updated materials. Now all realms will have unique assets, vs. previously sharing the Arthurian polearm. 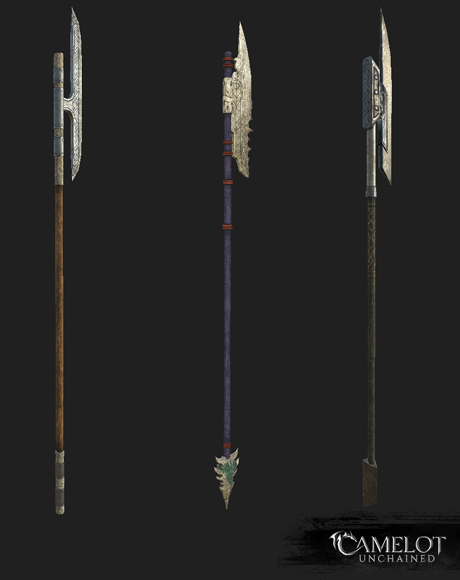 Earlier this month Michelle streamed some of her concept work, and noting it was on Valentine’s Day, she knocked out some quick concept for a themed weapon. Here’s some WIP shots of the high poly model. 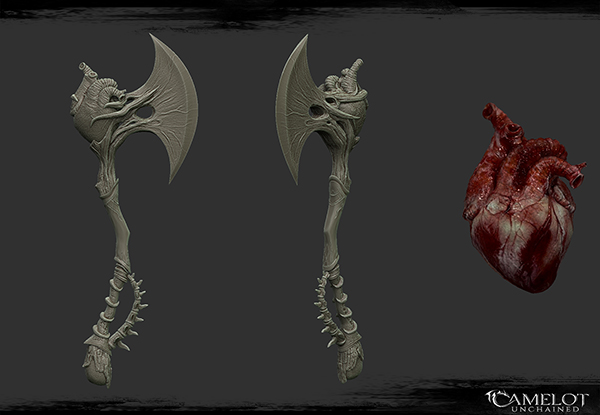 One of those longer gestating art projects due to it’s scale, the first Place of Power, was recently uploaded into an empty zone so we could see how our first pass on the materials look, get Mike working on vfx and lighting, and begin polishing. The great thing is it’s really coming along nicely! Now we start getting nit-picky, clean things up, figure out how to make everything better, before moving onto new art 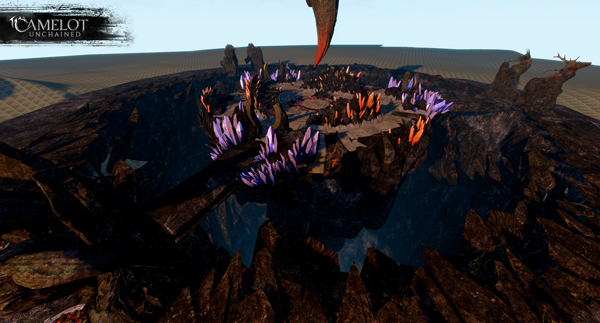 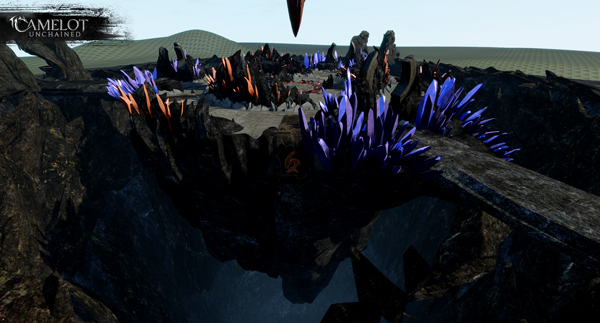 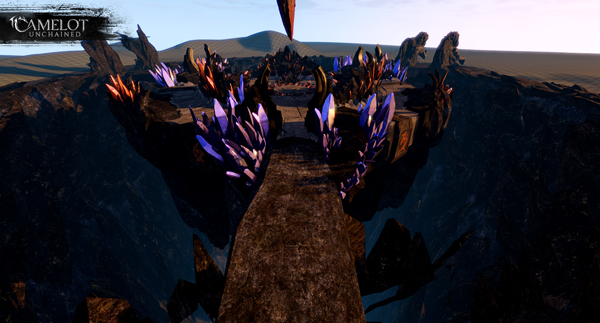 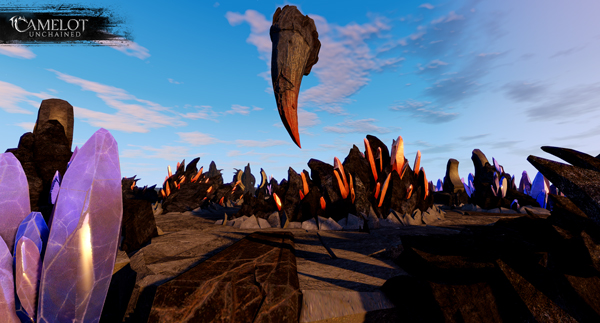 That wraps it up from Artland folks!

In terms of a weekend test, we are going to open up the current build to all of our Alpha, Beta 1, and IT folks. Please check your email later today for details about the test. And please read the email, it’s a little thick but there are some really important things to keep in mind *before* you go into the game. Among these are:

In terms of other news, I, along with the Lady J and Michael, are heading over to the West Coast at the end of the next week. I can’t guarantee that we will have a get-together with Backers as we usually do, but if you are in Portland or Seattle and want to get together, here’s the thread you can post in to tell me (https://forums.camelotunchained.com/topic/15846-mj-and-family-head-west/).

That’s it for today’s update. Once again, it was a great week capped by a weekend test of an overall stable build. Have a great weekend all and I’ll see some of you in the game!