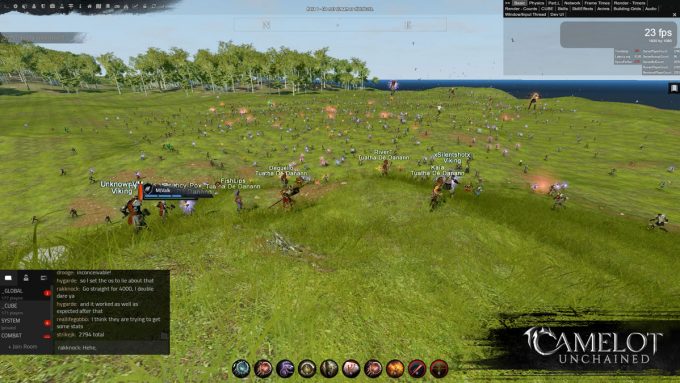 How do you define a massively multiplayer battle? One of our Backers asked on our Forums whether, based on what they saw today, we should use a new phrase instead of “Massively Multiplayer” to define our battles. That’s because of what our tests today showed as we continued our ongoing testing of the improved ability system. We had over 2,809 (which is why the date for this update is 2809!) ARCs (Autonomous Remote Clients) and players moving around an open battlefield using abilities, more often than we expect most players to do!

Wrap your heads around that folks: 2,809 players and ARCs running around the screen in the same battle, in a tiny, by industry terms, space. And not 2,809 NPCs, but 2,809 connected clients, consuming bandwidth/servers like players and using the server-based physics system. That’s a heck of an achievement for the team, especially when you think about the fact that “500 people in the same battle, at 30FPS” was the goal we stated during the Kickstarter. While there is still more work and performance improvement ahead, these numbers are much increased over our pre-Beta 1 numbers on the old system!

If you have not yet had the opportunity to see the action, you can join us for testing this weekend, as we welcome our Beta 2 Backers in for another test, just like we did today!

If you missed this week’s livestream update and Q&A with Mark, you can find that HERE.

For art this week, we start off with images of the skins for the Viking and TDD trebuchets from Dionne, with side-by-side comparisons to Michelle’s concept art.

Next up, we have concepts of sapper bombs from Michelle. This is followed by an image of the model created by Jon.

Next up, we have an image of the updated male Frost Giant from Jon. While these guys are not planned to go in immediately, we wanted to prep the old art to determine how much time it would take to get the work done, including setting up armor for them.

James continues his epic journey through the land of ability icons, this week working on icons for the Flame Warden, the Arthurian mage class.

****
MJ here with a few thoughts after today’s test and livestream, and some screenshots I took during the test!

For those who couldn’t make it to today’s test, here’s a screenshot from early in the test, when we only had 2,248 Backers and ARCs in the game. I know, *only* 2,248 in the battle–the engine was barely stressing out yet! But as you can see from all the pretty lights, and the Backers and ARCs sent flying into the air by the AoE knockback (more like “knock into the air”), a lot of fun was being had by all. If you look closely at the shot, you can see how the flying folks were in the middle of doing things (walking, using abilities, etc.) when they became airborne. Now, if we added some ragdoll physics to that, you would have much hilarity.

This shot was taken while we were pushing towards 2,800 ARCs and Backers. We hadn’t quite gotten to our peak, but we were very close. The server was still working even at this point, but it was definitely feeling the burn. We’re getting close to 3K, and we might be able to break through that ceiling next month. OTOH, we can live with 2,809.

One important thing to take away from this testing is not that we need, nor necessarily want, 2,809 players in a typical battle for Camelot Unchained. However, if we can handle 2,809 players in a battle from both the rendering side and the network side, that means we have the rendering/network bandwidth to improve the look of the game and also throw in NPCs, crazy siege engines, VFX, and more.

This bandwidth allows Ben and me to expand our vision for what a battle can look and feel like. It is quite freeing in that way. It also means that if we can do that, but not require the best CPU/GPU to play, more people can play our game.

And back to me, Tyler – That’s it for this week! Remember, we have a short test going on this weekend that showcases the large battles we want to support in the live game. To reiterate, we were shooting for a minimum of 500-player battles during the Kickstarter, and have clearly surpassed that! We have lots of cool things coming soon. Stay tuned each week to keep an eye on our progress, or feel free to jump into our forums and let us know what’s on your mind!