This month, so far, has seen a serious focus on both the re-abilitation front and on client stability. I’d like to call the last two weeks “the re-sta’bilitation push”! This effort is focused on getting us a good foundation for testing all the work going into Camelot Unchained as we fly toward Beta. The team here has continued working very hard, not only on the two aforementioned issues, but also on many other tasks related to Beta, so we can land a good, strong, yet old-school Beta build. I’ve got lots of progress to cover in this update, so let’s get that rolling!

We’re trucking along at a great pace with this week’s update, and I couldn’t be prouder of the team I have the privilege of working with.

Let’s start with the “Top Tenish” List, which encompasses some of the highlights of this week:

For even more info on progress made, I present for you, the User Stories… TA-DA!

As a Developer, I’d like a way to be able to edit gameplay variables on the server, live.
Updated slash commands – build vars can be set with just /command, rather than /var command (previously were shift+enter commands). – Complete

As a Backer, I’d like to know about smaller changes that don’t have their own user story.
First pass C.U.B.E. video. – Complete
Create an arrow-firing turret model for testing arrow spam that can be placed on the ground. – Complete
Fix auto run when alt-tabbed. – Complete
Set game client window to start on top of other windows, instead of starting up behind other windows occasionally. – Complete
Updated character creation to calculate character health on creation, rather than starting a new character with 1 hp. – Complete
Organize GitHub repositories – Complete

As a French Backer, I’d like to visit the French version of the updated Camelot Unchained website.
C.U.B.E. page translated. – Complete

As a Developer and Backer, I’d like to see improvements in memory usage and threading.
Create a tool to track and find possible threading issues in the client. Add to HUD. – Complete

As a Backer I’d like a patcher to not only update my game, but also give me the most important news and updates, get support, chat with the community and look awesome while doing it!
Use new chat library within the patcher & game client. – Complete
Bug fixes to Patcher UI. – Complete
Update patch build process for easier debugging of the patcher with npm run debug command to launch a patcher using the currently compiled source. – Complete

As a Developer, I’d like to improve, and add to, the SFX for re-abilitation.
Ice arrow. – Complete
First pass resources for “magic type” abilities – 152 source sounds created. – Complete

As a Developer, I’d like to be able to copy an entire skeleton and its dependencies, quickly, to support unique animations per character types.
Initial discovery of components and cloning. – Complete
Add a button to the editor to support skeleton cloning.  – Complete

As a Backer and Developer, I’d like to see increased visual fidelity and improved performance in the dense test forest.
Audit poly count of tall tree and reduce. – Complete
Change mushroom texture layout to use tris and update material to PBR. – Complete
New branch material for trees that looks better and is cheaper. – Complete

A great two weeks of work there, from a dedicated team! Let’s move on to images of new art assets, starting with the beginnings of most game assets: concept art!

First up, some concepts of Arthurian maces: 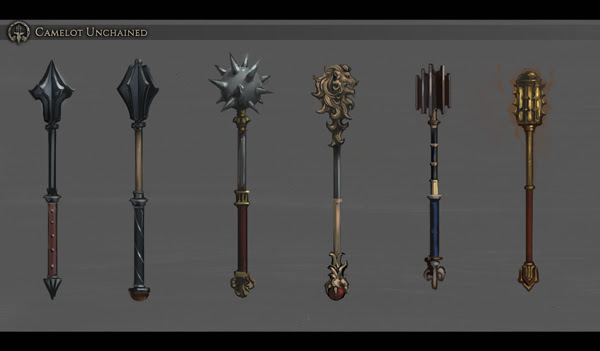 These concepts then take life as high poly sculpts by Jon: 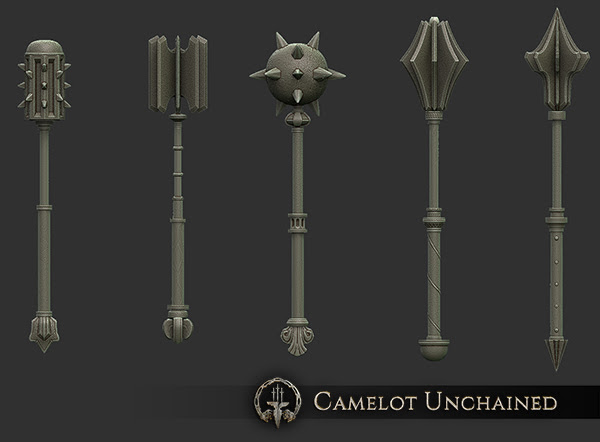 Last week, Jon was also able to get to a couple of TDD great swords, a Viking two-handed hammer, and an Arthurian polearm! 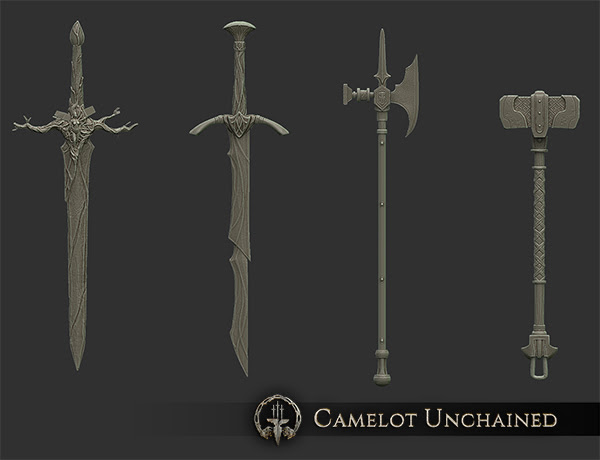 Here’s a close up shot on one of the TDD greatswords, showing one very unhappy fairy: 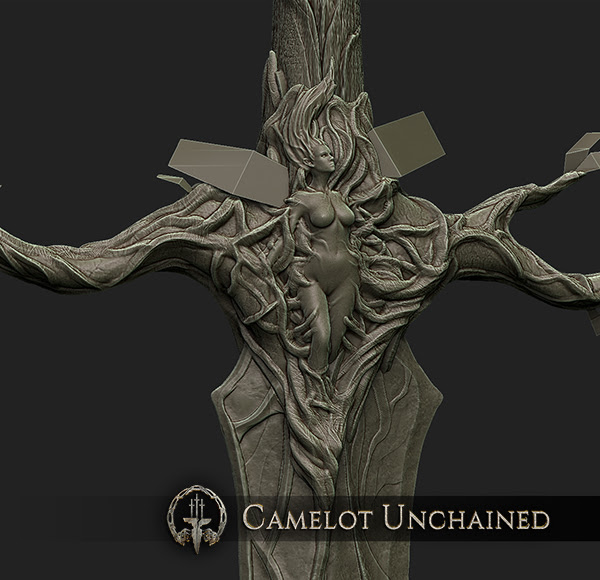 One thing we’ve been talking about in past updates is our idle animations. Because this game will support massive, 500-player battles, a big concern is visual readability. One of the first things we did with the idles was work on a variety of poses that were not only cool and expressive, but also were different enough between Realms that you could tell the difference at a glance. While this is only the start of Realm, gender, and race-specific animations (and will change and be added to), we’d thought we’d give you a look at that first step: 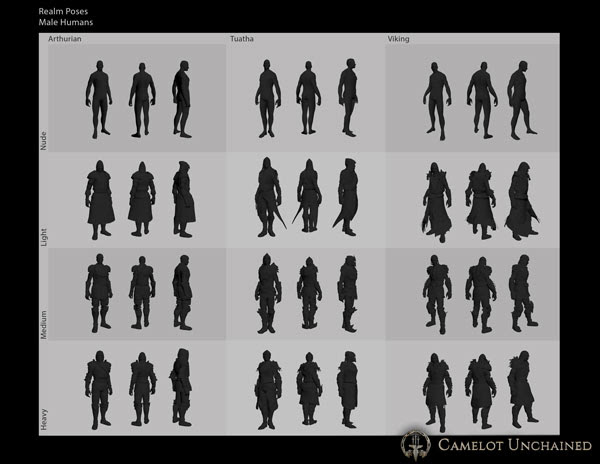 I’m going to end this little art show on one shot I took while running around during some in-office testing this week. To preface this, I have to explain that we artists are generally never happy with our finished products. And as is usual, I had just finished generating a list of fixes and improvements I wanted to make to the old forest, when I got up on this big hill in the game, and just said, “Wow. I sometimes forget this game already looks pretty damn good.” (And we have so much more room to improve it!) 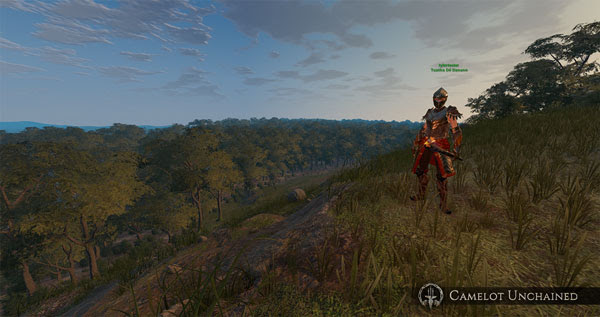 Have a great weekend all,
– tyler