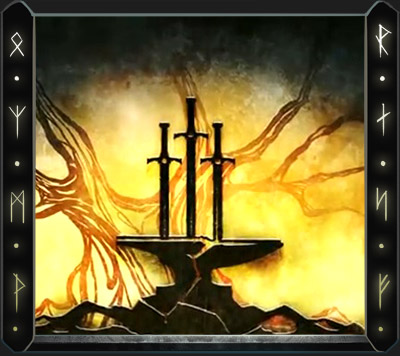 One of the things that set Dark Age of Camelot apart from its competitors was the number of races and classes that the game had at launch as well as the ongoing expansion that led to the massive number of race and class combination that it possesses now. Originally, the reasoning behind that choice was that I knew that we could not compete with the budgets and backing of the three big MMORPGs of the era, UO, EQ and AC and that our best chance of success relied our having a number of differentiating features/gameplay that would set us apart from them.  Part of my plan was to use the number of classes and races as two of the major differentiators at launch (“Look Ma, more races!”) along with the RvR system (inspired by Kesmai’s Air Warrior). Moreover, I believed that by creating races and classes that were different from realm to realm, we would also increase re-playability of our game (okay, so sometimes I do have to think like a business guy as well as a design guy) and therefore increase its “staying power” over time. We will follow a similar, but not identical approach with this game but for different reasons.

Two of the unique things about a Kickstarter-funded game are that we will have a large core player base (our backers) waiting for us when the game launches in addition to the public as well. Additionally, we will also have well in excess a year of hardcore testing with our backers at every major stage of the game. That freedom allows us to set off on a course that is slightly askew to we did back in 1999 when Mythic Entertainment set off to create Dark Age of Camelot. Now before you hit the “kill MJ switch”, hear me out, please.

First, I needed justification that the rock, paper, scissor mechanic is still the best way to go for the game and this needed to be based on enjoyable gameplay and not based on increasing longevity nor of needing to compete with other major games. Since we are embracing the niche market and Kickstarter funding, our focus needs to be whether the RPS approach will make CU a better game for our players.  We must not try to increase longevity by having a core design principle based substantially on the hope that players will extend their stay with us by playing other realms. It is not that I do not want players to try different realms on different servers; I do, but not because I want to retain their subscriptions longer but because I want it to do fun for them to do so. The reason to use RPS is because, IMO, the mirrored class mechanic that WoW and other games use is not the right choice for this core RvR-focused game. Core MMORPG gamers know, and are quite familiar with the issues that come with an RPS mechanic and while they are not happy when they encounter them, they understand the problems that come with utilizing that mechanic.

One of the reasons I chose to use the mirrored mechanic for WAR (yep, blame me if you hated it) was to make balancing of the game easier (I think I used the phrase “Because balancing DAoC’s classes was a f******* nightmare” with the team). Another reason back then was that I believed that because of WoW’s success, that if we went down the RPS path, the large number of players we needed to hit our projected subs would be less tolerant and forgiving and wouldn’t stick around for very long. Fortunately for this game, we don’t need to worry about big numbers and since I’m aiming this game right at core RvR-fans, I can choose the mechanic based on how much fun it is to have different races/classes for each realm. Thus, each realm can now be populated by race/class combinations that the players have to deal with in battle knowing that certain combinations will be more of a nightmare matchup while others will not be; in other words, the purity of RPS mechanic. This lends an element of unpredictability and it gives us so much more freedom to explore different classes/abilities without worrying about having everything equally balanced 100% all the time. We can experiment, take some chances and yes, every so often I will once again be a target of tar and feathers because we tried something that didn’t work out so well but that’s okay and frankly, how it should be because the core RvR-players would not want us to pursue the safer path.

Over the last few weeks, I have gotten feedback that some people would prefer that all races (and genders) were equal in their abilities, stats, etc. IMO, that homogenization (see, I can use big boy words every so often) makes them barely more than blank slates, with no real personalities and/or style other than their appearance. If every race is the same in terms of statistics, abilities, banes and boons, then why bother to have three different realms with different lore? I mean no insult towards studios that make this choice (just as I did) but that is not the right choice for this game. Remember my first FP that we were going to have to insult someone, well, this was one of the reasons I said that. I want CU’s races to be unique, exciting and different from each other. I want players to have to think about the implications of RPS on their choices and because we are gearing this game to core RvR-gamers, I know that our audience can deal with the differences without constantly resorting to the “Nerf the Arthurians now!” (Call me an optimist) Yes, it means more work for my team and oh boy, does it mean that I will have to listen to more “But Mark, if you just change this then my TDD will…” but I know I won’t have to listen to it has much as I would if I was targeting 1M subs would I? So, all our races will have truly meaningful differences from each other in an RPS approach but then where is the bad news?

Okay, do you remember when I said that we were going to in a different direction in some ways and that I had to be upfront about some of our limitations? Well, I also believe we need to have fewer races and classes at launch than you might expect but from the guy who launched Dark Age of Camelot.  Since I want each one to be unique and really something cool, we will have to rein in our expectations as to the number of races and classes that we will have at launch. What will that number be you might ask? It will depend on whether we make our stretch goals since each new race and class we add will need significant support from the design, programming and art teams because I believe in having really unique races and classes and that I will bot create dozen of races and classes at launch if half of them are mediocre.  I want our backers to know that we will absolutely emphasis quality over quantity this and be fully aware that we will not launch with half-finished races/classes/etc. The RPS approach does not need to have a ton of races and classes to work, what it needs is having those races and classes be truly unique, well-balanced and fun to play. As I’ve said elsewhere, I was really impressed by how guys like Notch and the folks at CCP built their games over time and I want to apply some of those lessons to CU. Start small, iterate and then build, baby, build.

My last point regarding RPS is also a very important one for our potential backers. We want to get our backers into our game earlier than I have ever let players into my other MMORPGs. We need you to do this not only for technical reasons but also because we need your help in making our races/classes ready for launch. However, there is another reason and that is that if we can balance the planned launch races/class well before launch we can move on to the next set of races and classes, even if it is only on a test server. Over time, I want CU to have one of the most varied set of races and classes in any MMORPG because I believe that will make CU an even better game but to do that we will need your help to do that. I hope that you will give us that help for both the Kickstarter and during our rather lengthy (but subscription-free) backers beta but if not, thanks for reading this post.

Up next: Foundational Principle #7 – Crafting should be fun, profitable and useful but not induce Carpal Tunnel Syndrome