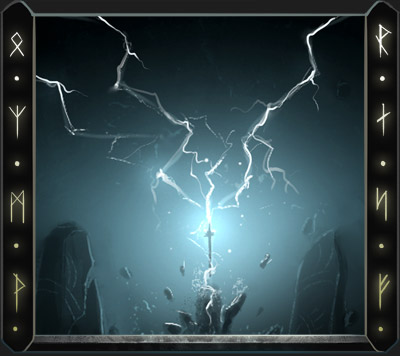 …. Slaying all the bad guys, breaking their pride. Burn this, burn that, can you break their Pride?

First, thanks and credit to the Canada’s Five Man Electrical Band from whose work I have drawn upon for the title of this blog posting. Secondly, the concept of “Pride” is truly an important principle for Camelot Unchained and, IMO, should be as well for any game that features RvR as the cornerstone of its design. I have chosen to use the word “Pride” to encompass a wide range of individual prides such as racial pride, class pride, guild pride, realm pride, server pride, etc. all of which must be present in CU it is truly to succeed over time. As usual and without further ado, let us see how the concept of these prides applies to CU.

I’ll start by addressing the issue of realm pride as that is the first choice that players will make during CU’s character creation process. There are truly no “good guys” or “bad guys” in CU, at least in the traditional sense, as each realm’s actions are motivated by their instincts for self-preservation and survival. The influx of power through the Veil destroyed the world that existed before the piercing and these three realms and their leaders are pitted against each other, jockeying for survival in a very harsh and hostile environment. Of course, each realm views its motives and actions through its own filter as being pure, noble, and the best solution to the world’s problems. The Tuatha De Danann are simply trying to restore balance to the world and to begin to prepare for another apocalypse; the Vikings are looking for new lands to settle on and rebuild, and the Arthurians are looking to unite the world under Arthur’s banner and civilize and tame a hostile world. It is CSE’s job to ensure that each of these three realms, divided as they are currently, are different enough from each other so that they do not feel homogenized but at the same time, we must ensure that each realm is appealing to players. Amongst other tasks, we must create enough lore and backstory to give our players a good understanding of each realm, its inhabitants and why that realm believes it is the best hope for this troubled world. An important part of that lore and backstory will belong to the races that inhabit each realm and serve as its leading citizens.

Racial pride is an important part of realm pride and just as with the realms, we have to construct each race to be unique, interesting, and appealing to gamers. If prospective players do not connect with each realm’s races, they probably will not join that realm and if enough players feel that way, well, there will be a massive realm imbalance and that alone could doom the game to failure. Lore and backstory will help but it has to go even further than that with the individual races. As we did with the realms, we will not homogenize the races and, as we are following the rock, paper, scissor approach, every race must have their own advantages and disadvantages, strengths and weaknesses, etc. Mirrored races are not necessarily boring in and of themselves but it is harder for players to feel strongly about their choices if the race on the other side is really just the same as they are, albeit with a different skin texture. We cannot just try to make the races different from each other; we must make them different in more than just backstory if there is to be true racial and realm pride in CU.

In an RvR/RPS focused game such as CU, the belief that a player’s chosen class is either OP or highly competitive and never the “red-headed stepchild” is rather important to them. It is once again our job to make sure that each class archetype has enough differentiation from the other members of that archetype not only in their appearance but also in how they are intended to fill their niche within CU. In a perfect world, we would create three different tanks, each with their have their own advantages and disadvantages (so that no tank is perceived as the perfect choice) and that each implementation leaves the players wanting just a little bit more “oomph” for their preferred choice. It’s an old axiom among mediators that you’ve done your job well if both sides feel disappointed in a successful settlement to their dispute and I believe that that concept applies here as well. We want our players to love their chosen class (es) but we also want them to feel that they need something else to be complete (well, at least until the next patch). As per other posts, our classes will not be mirror images of the other. While we know that this will make balancing the game rather more difficult, it is a price that we are willing to pay in order to allow players to have more choices in the game. We will have done our jobs well if we see spirited arguments on the forums about our implementation of tanks and the result of which is that players from all three realms are strongly advocating all three variants are either OP or too weak to survive against the other two.

Guild pride is another important member of the Pride family, the decades long rise of guilds in importance to both players, and designers of MMOs cannot easily be overstated. While we need to walk a bit of a tightrope here (so what else is new?) as we do not want any server to be dominated by one or several “super-guilds,” we also want our players to feel pride in their guild’s overall accomplishments. During the development of WAR, we did some very good things with the “Living Guild” concept; we have to surpass that here because the purist nature and implementation of RvR conflict in CU presents an opportunity to take guilds to the next level. Thus, at a minimum, guilds should be able to own and build guild houses, land and possessions in a size and manner that reflects their success in the game whether due to participation in RvR and/or as crafters. Guild members must be able to contribute to that success both actively (through donations, crafting) and passively (guild standing reflects the skill/successes of its members) and to be proud to be a member of their guild. Additionally, we need to put mechanisms in place so that guilds can easily work with each other, share information and cooperate in a way that adds to the enjoyment of RvR by its members and the overall success of its realm. If we can allow players to feel guild pride on the individual level as well as pride on a greater scale (cooperation), this will further enhance the feeling of the next and final pride, server pride.

Server pride is the last member of the family I will address in this post but in many ways, it is both the most important one and the hardest to accurately pinpoint. Why do players have pride in their server, as it is simply a piece of hardware on which all the action takes place. Yet, for those that played Dark Age of Camelot, the debate about which server(s) had the best community continues to this day. To me, server pride is the embodiment of everything we hope to achieve with CU, as it not only encompasses the individual prides but everything else in the game, including the game’s various communities. However, this is not something that CSE can simply will into existence through great programming, clever design, and/or gorgeous artwork. What will bring server pride about are the players themselves; and while our contribution is a rather important and necessary step, it is the players that will both create and boast about this pride. For this reason, among many others, I decided to push for an RvR-focused game because I know that CU’s backers and core demographic are looking for a game to bring back that feeling of server pride that they experienced before in other games. They do not need convincing of the importance of the prides, they already understand it and not simply by reading my poor attempts at writing but because they lived it in Dark Age of Camelot and other games as well. That is something that most MMORPGs have lost over the years and that we are going to try to bring back with CU but it can only happen if my belief in what our core demographic truly wants is confirmed by their support with our Kickstarter. If I am right, the Kickstarter will fund and our journey together will start; if I am wrong, well, it will not be the first time my pride will be hurt but that goes with the territory. I hope I see you all in the Veil and together we will build the Pride family, slowly, steadily and ultimately satisfactorily.

Up next: Foundational Principle #11 – Sandboxes are great fun for kids and adults as well!