Another week has gone by, and with it, lots and lots of progress on a couple of key systems. As you can see from the Top Tenish list, both our animation and VFX/SFX systems are nearing the “Announce the darn Beta 1 date already!” point. 🙂 Because it is late and getting hot in the office (HVAC goes off at 6), I’ll keep this short and sweet (plus, we have a newsletter coming out today, too!).

For the week, here’s the highlights in Top Tenish form:

1. WIP – Tech – Animation: This was a really good week for animation, as we saw several efforts come together in players’ movement, jumping, and combat and travel stances. Andrew and Scott worked together to fine-tune basic concepts into something that transitions between different animations really well, while using our physics system to add subtle variations into the player’s movements. Rob updated the networking and physics code to match the changes and to make it feel great. While Scott continues to improve and polish some of the animation assets, Andrew will begin looking at the full equip and unequip needs of the system to support visible weapons on the character when not equipped.
Here’s a couple of highlights:
a. Scott has control over individual run and walk animation speeds, so they sync up better without            having to create multiple variations.
b. Ability to mix existing animation clips into a new clip. This allows us to combine existing                      animations to give us a wide range of combinations, without having to make animations for every          permutation of equipped weapons. This will happen automatically during gameplay.
c. Rob updated the code supporting the physics and networking side of jumping to support Andrew            and Scott’s changes (which means falling through the world will become far less common).
d. Standing vs running jump support, as well as the transition from jumping to falling.

3. Washington office space confirmed: We’re very excited to say that yes, we do now have an office for our West Coast team. Everyone is prepared to move, and we’ll be setting up the physical space starting on Monday! Having more of the team in one space will be a boon for communication and productivity.

4. WIP – Tech – Item durability: Christina began work on the item durability system that Mark laid out. This includes progress on item stats, as well as slash commands (for testing) to modify things manually, and repair functionality (returning things to max durability and subtracting repair points). The next step is to hook this up to the ability system, something Matt will help tag-team later.

5. WIP – Tech – Literal Building Blocks: Christina, Mark, and Rob have been laying out how to build blocks in our crafting process. These blocks will be items, which utilize stats and stack in the player’s inventory. Blocks will be crafted out of raw materials via recipes, and different types of woods, stones, and metals will result in different statistics for each block. For example, the TDD could harden an already-hard wood to make it both resistant to all damage, then throw in some additional protection against fire. Mark’s plan is to have about 300-400 different types of blocks and over 1K recipes available for the opening of Beta 1, then whittle that list down significantly prior to LIVE. Note: These blocks will not all look different from each other, but even when they look like another block, their stats could be quite different. For our LIVE launch, additional art time will be devoted to this, so the existing blocks could look very different.

6. WIP – Tech – Player Inventory UI: Work continues on an updated inventory and character UI. We’re building out a first pass that shows stats, equipment slots, and inventory. This will see plenty of iteration as the game progresses, but for now, this work will help the game feel more like a game for Beta 1.

7. WIP – Tech – New VFX functionality: Mike has had all manner of odd-looking particle tests running on his screen this week. When not making new assets, Dave and Mike have been working together to test support for different particle orientations. Tyler has asked Mike to save all these tests out so we can drop ‘em in a spot on the VFX test map, just for fun. These will go with all the other new floofs and poofs and sparkles he’s made for the VFX test map. This map is in George and Dave’s hands for performance testing. If you want to see Tyler’s stream where he works on the art side of these things, you can catch that HERE.

8. Tech – Click to Use: Following the addition of manual aiming, the client-side click interaction needed some updating before additional functionality could be put in. Matt built the start of an updated click-to-interact system that allows us to interact with things such as gates, doors, and siege engines. Additionally, this code is fairly generic, allowing for re-use such when clicking on other entities in the future. Or right now, allowing you to pick dropped items up off the ground with a click.

9. WIP – Tech – Zone offsets: We currently have seven test islands up as we work towards testing our zone offset changes, as well as traversing and teleporting between them. Tim has told me we have a land mass up that is roughly one third the size of Rhode Island. Sorry, D.C. we don’t love you as much anymore as a size measurement, our heart is now set on having a larger landmass than R.I. in coming tests. But no worries, we have no plans to move there!

11. WIP – Art – UI: Michelle completed a second pass styling concept of windows and health bars. We streamed our group review of those concepts earlier this week. You can catch that HERE. We’ll continue to iterate on these based on feedback, but are fairly close to integrating these visuals into the game’s UI, once her concepts are finalized. BTW, if you haven’t listened to the stream, you should, there’s a good reveal there.

12. WIP – Environment Realm Variations: Dionne completed a first pass of the Deciduous 002 biome (Autumn Biome) Realm variation textures. These still need terrain mod assembly and a second pass asset audit. This week, she has also helped out updating some of our older asset textures to use our PBR rendering system.

13. Art – Sound: dB created new variations of the landing music (the music that plays as you enter a zone). He’s also working with Gabe on hooking up SFX to abilities, as new functionality comes online. All of this work is very much a team effort between dB, Gabe, Andrew, and Ben.

All around, another solid week from the team. As you can see, while we still, and mostly always will have new engine tech in progress, we have lots more going in that makes this feel like a game!

For a dose of art, we have a link to some of Scott’s work in progress: two-handed greataxe swing animations. Click the image to play the video. 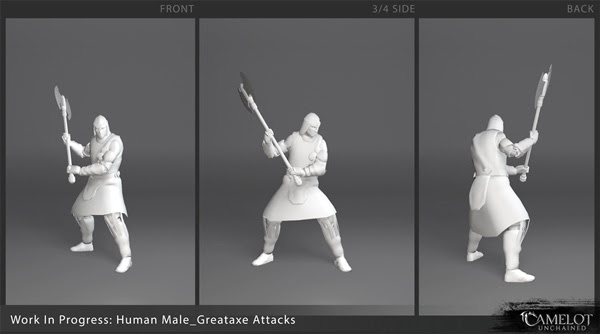 We’ve put a bunch of work into these, and it’s sometimes hard to get the full understanding of how the animations look until you see them in game, paired with movement as you jockey for position with your opponent. As we get closer to the full loop of animations–equip, move, swing, unequip, run, jump, etc.–we’ll show more gameplay. Speaking of jump, Scott took a still shot of one of our characters in action. For those of you with access to our tests, hop into the game to run around, jump, etc. Let us know what you think. (Best test case is to go unarmed, or equip a two handed great axe, to get the most up to date changes.) 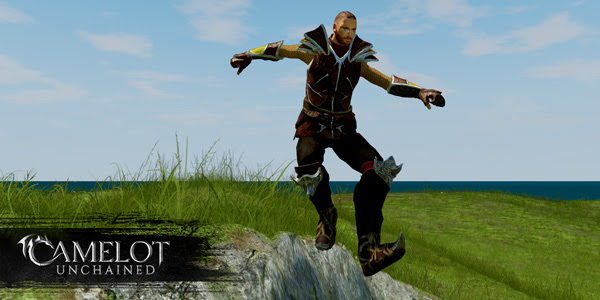 Moving on to some of our siege equipment; Jon wrapped up the Viking scorpion earlier this week, and mostly finished the high poly TDD scorpion today. I say mostly, ’cause I bet there are some more tweaks he’ll want to make Monday. First, here’s the Viking scorpion: 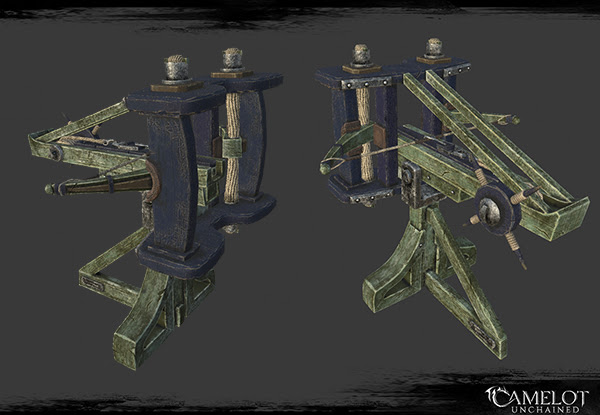 Up next, the WIP TDD scorpion, which you can see being made HERE. 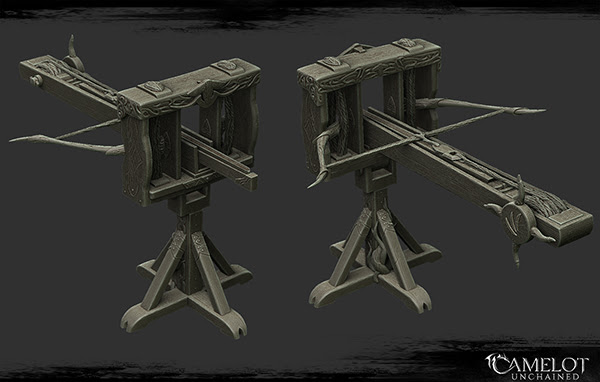 Similar to last week, where we showed off some of the texture variations for Realm ownership of the environment, this week we have some of the variations for the “deciduous_002” biome. Some of you may be familiar with this as the “autumn biome.” The first shot shows some of the ground textures, and the second shot shows the leaf and bark changes. These texture changes are only one part of the way we can show Realm ownership. Once we get the biomes set up in the terrain editor, we can play with density, types of plants, placement, VFX, etc. 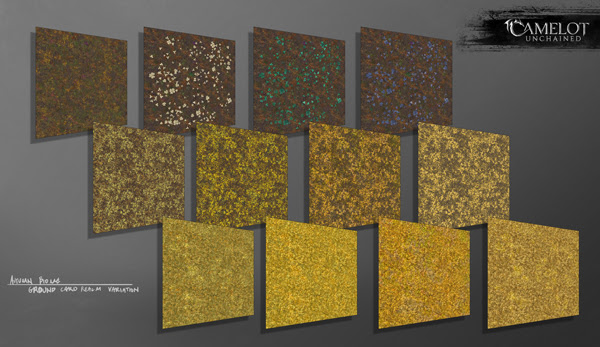 As mentioned above, Michelle completed a second pass of the UI styling for Beta 1. We actually streamed our review of this, which you can catch HERE. It’s a fun look behind the scenes, with no scripted events! The image in today’s update encompasses the health bar UI concepts. None of this is final, and will see iterations from testing feedback. 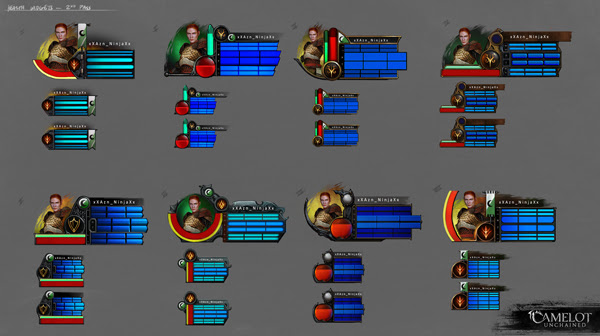 To finish off the week, we’ve got a couple of in-game shots. The first, a TDD human surveying his kingdom. Some of you may recognize the building in the background. Now, what would we need that for? Hmm…. 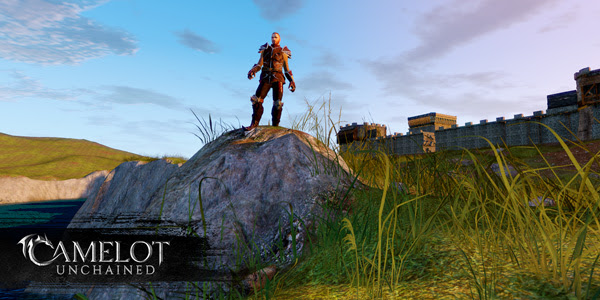 Next, we have a Viking Valkyrie keeping warm by the fire, as snow begins to fall. 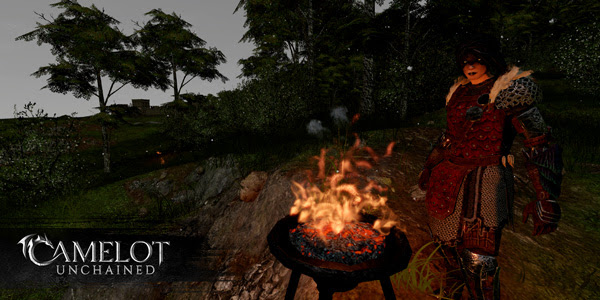 That wraps things up for us here at CSE this week. We’ve also got our monthly newsletter going out today as well, so check your email. It’s full of lots and lots of information, about the game, the team, HDR monitors, and more!