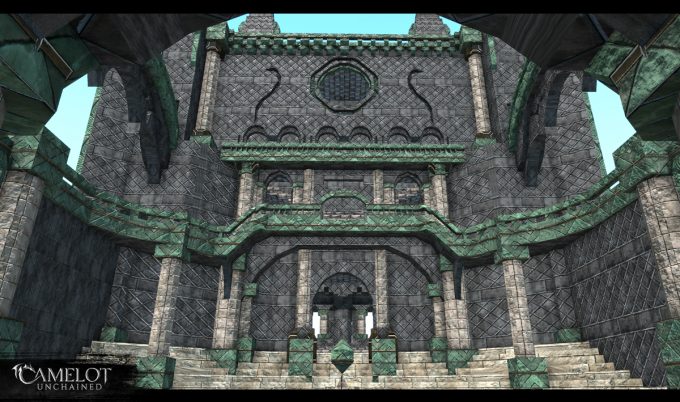 Welcome to the end of the month update for March, 2020! We know that even without living in the world as it today, it’s been a time of stress and doubt for many of our Backers. I hope that this update shows just how committed the team is to delivering on our stated goals for Camelot Unchained of delivering a great RvR game. If you saw today’s livestream (https://www.youtube.com/watch?v=-xTJDAr0ei8&t=143s), you already know this but if you haven’t, be prepared for a cornucopia of delights that include everything from art to design to tech, including bringing in an “Extender” goals ahead of launch, including the Spirit Mages (https://camelotunchained.com/v3/stretch-goals/spirit-in-the-sky-extender-pack-plus-1/) and Scouts (https://camelotunchained.com/v3/stealth-unchained-our-next-stretch-goal-and-so-much-more-pictures/). Thus, without further ado, today’s Top Tenish or, in this case, Top Thirty-Six.

The Art team has been charging ahead tackling difficult work this month. As seen in the top 10 but really top 36 update, much is in motion in the art pipeline.

With that we’ve got much to show you and are excited even more so for what’s soon to come from us in art land as we are crafting and forging new ways to implement many visual features we feel you the player and community will enjoy.

For art this month we start off with a male TDD medium armor sculpt. Influenced by the Dark Fool class, this sculpt is moving forward into materials as well it’s female variation. 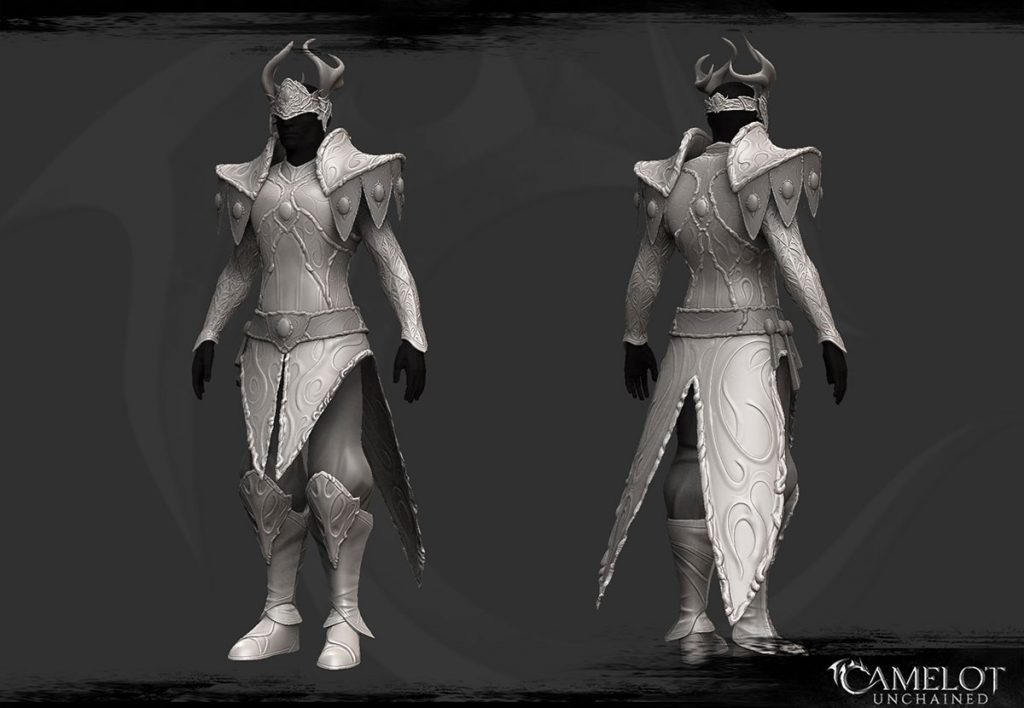 Viking Helbound masks have been making progress. We explored to give good variation while invoking themes of the goddess Hel and the duality of life and death. 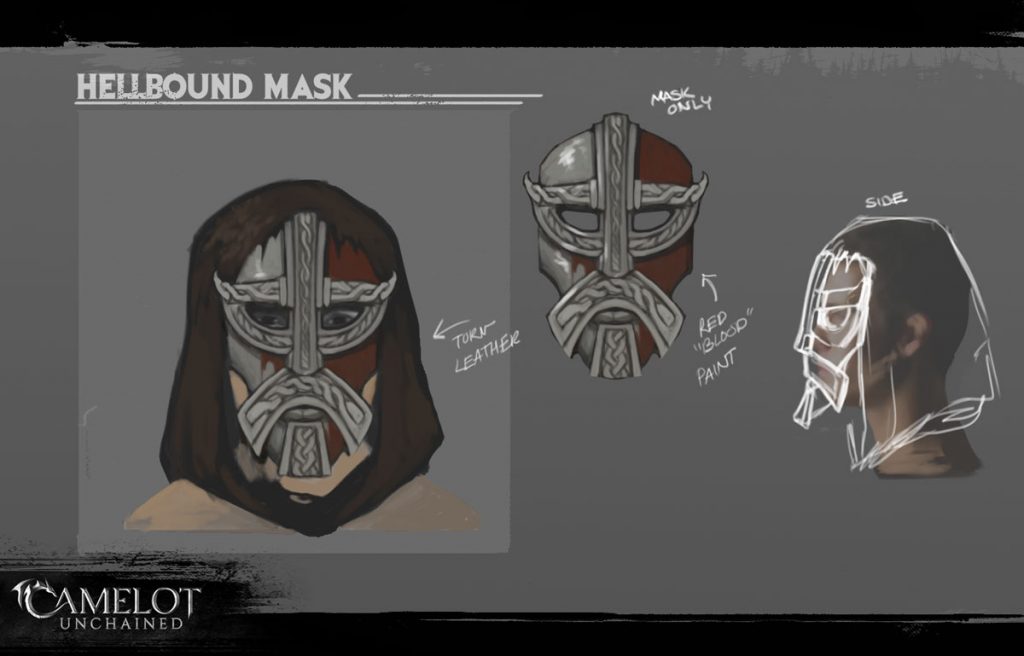 From a wide selection of concept design we have selected this Hel Staff which is nearing the finish line of the high poly sculpt phase. Each side of this staff has a spirit of life or death. This is not only for looks as design will be factoring this into gameplay. 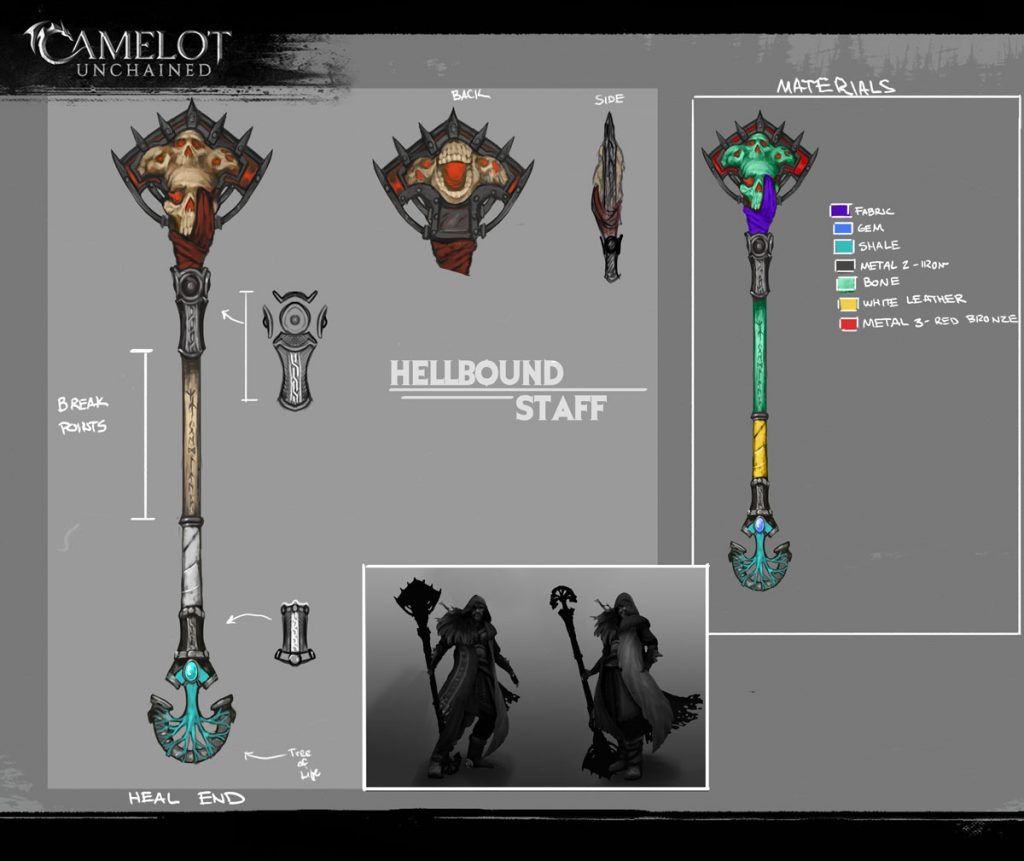 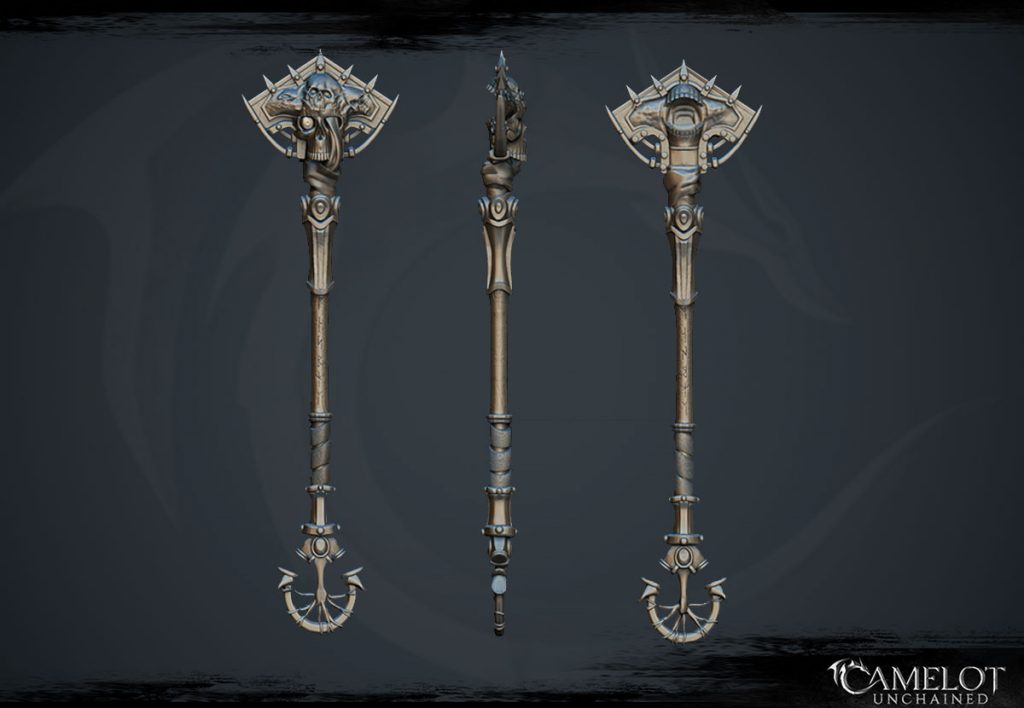 Moving on to the TDD devout class, Blessed Crow we got a slice of concept art for you of Cauldron Staves. Exploring a variety of shapes and interpretations of what a TDD interpretation of a cauldron staff would entail. Added below is also a fun piece exploring the function of how this staff could work for the player. 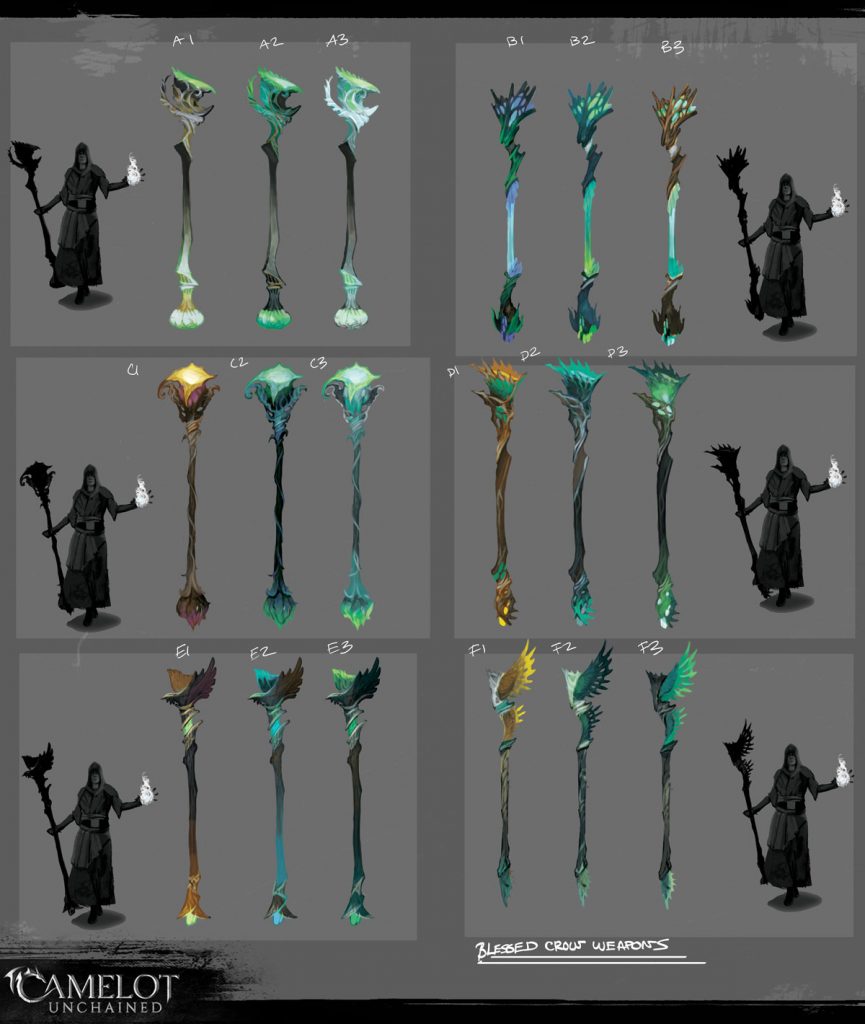 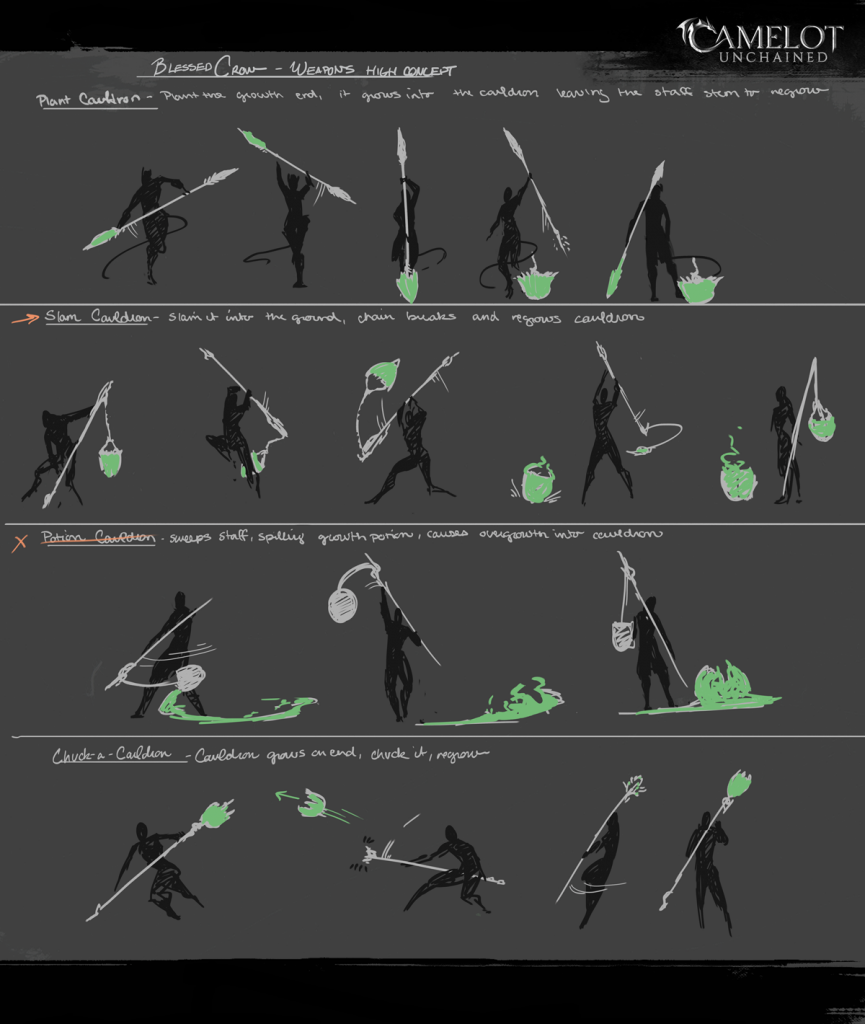 For the Soul drops feature you may know we have talked about souls having a visual stance in the world of CU, on the art side we’re in the process of developing how these will “come alive” when a character dies. Below is our first pass concepting these Soul Drops and the contrast between both race and realm. This will help with future developments in crafting as well. 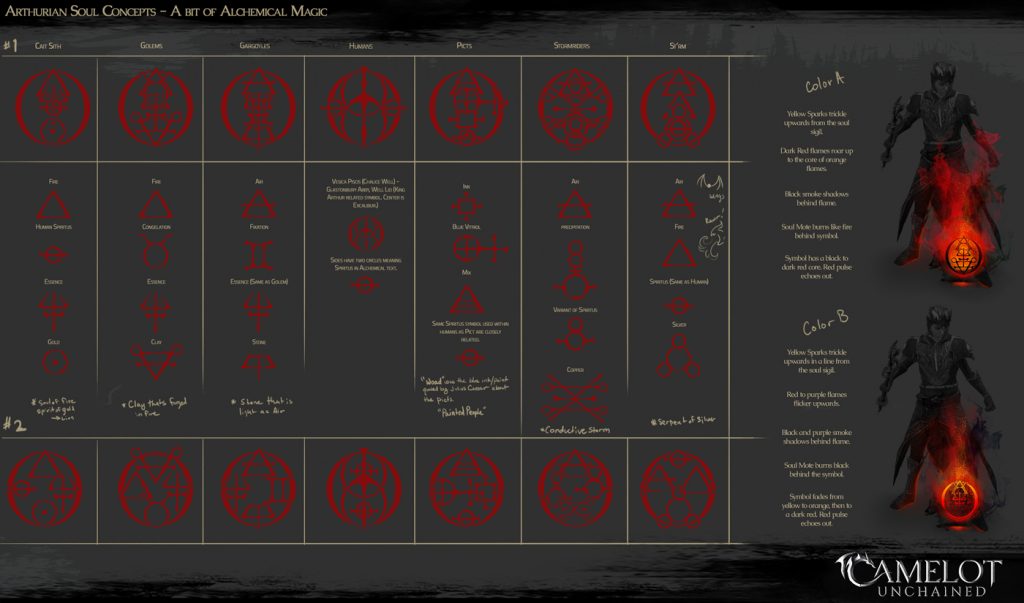 Here we are chipping away at the coastal flatlands as our shrine starts to shine in both concept and 3D application. We hope to showcase soon a finished section so you can see full and well how the environment art as a whole gets elevated. Throughout the land you’ll find these little beautifications and pops of décor to give you a sense of not only who owns the territory, but if it has yet to be claimed. 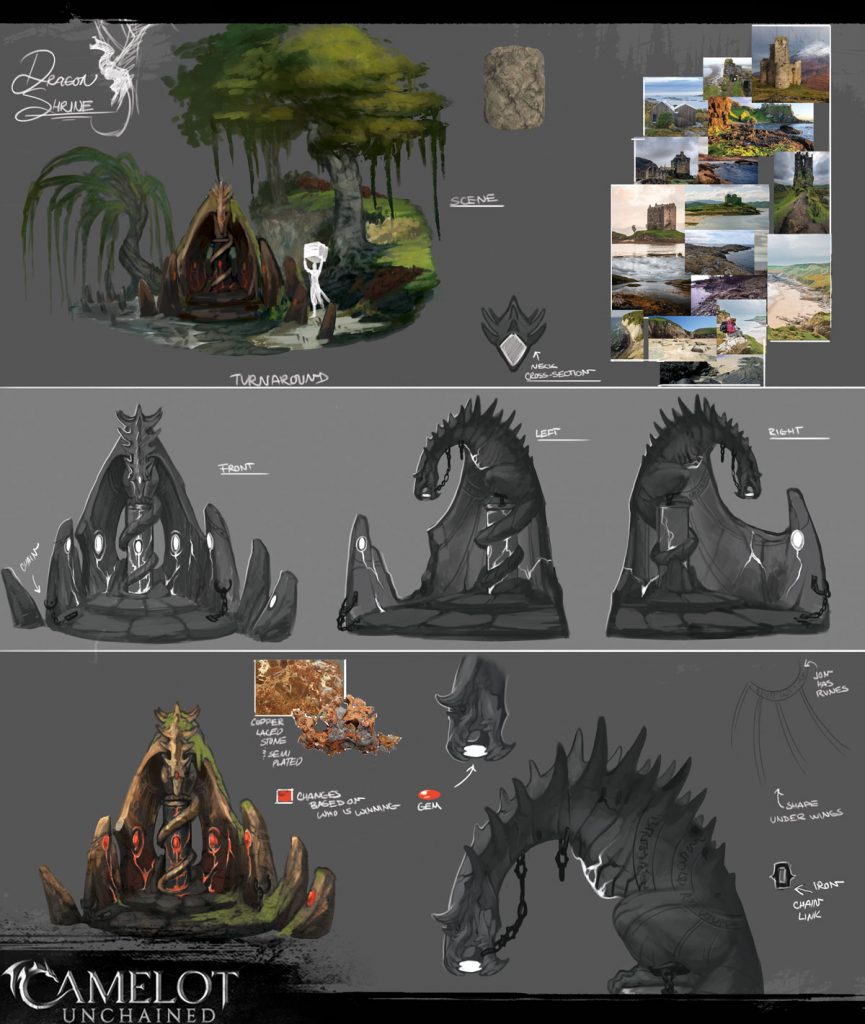 New materials have been implemented and are now available for use in CUBE. Check out below the selection and some of the new options now being tested by builders. Credit goes to community and Builder Brigade member Scott Florence for the build examples below. 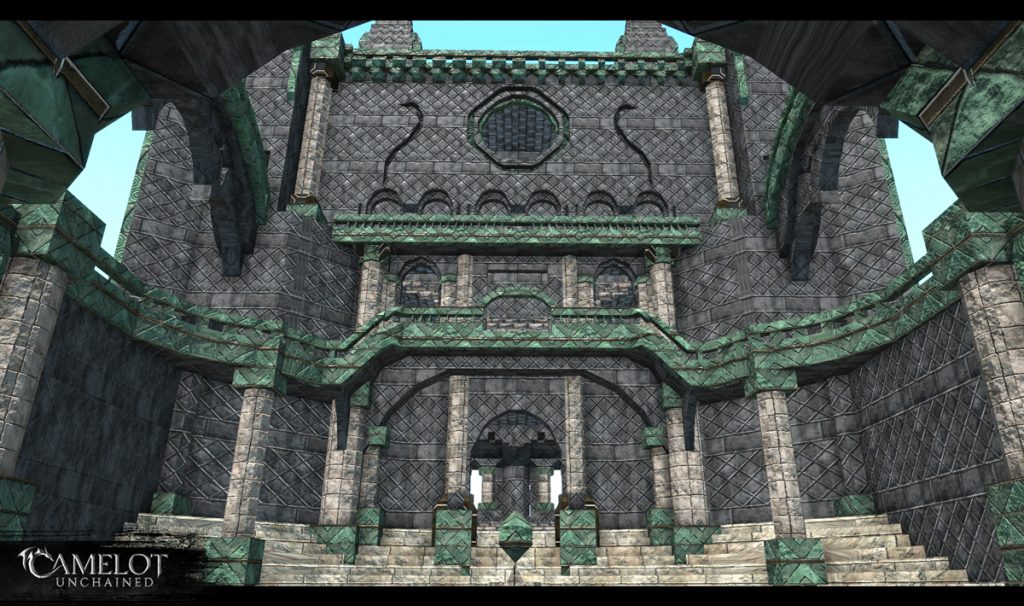 Design for player placeable barriers have entered the concept phase. Below are some first pass concepts to check out as we watch these evolve through the design process. 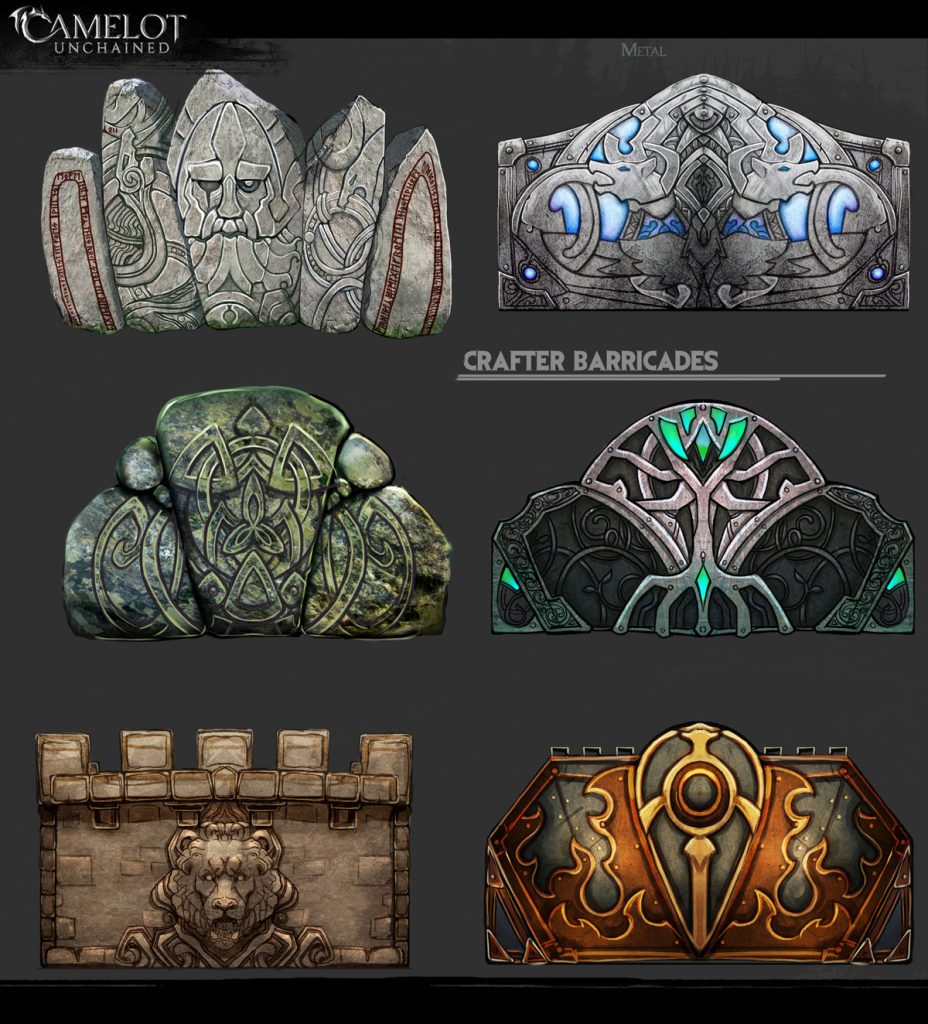 And here we have a bit of a visual showing the before and after with projected projectiles being worked on. You will note how with this the particles don’t just clip in to the ground line but reflect the angle of the terrain.

Faith is hard, just like making an MMORPG is hard. Last month I said that CSE and I would work hard to regain the faith of those that have lost it. I hope today’s update, and the ones that follow, will do just that. With the pulling in of the Spirit Mages from an Extender Pack and working towards doing the same thing with the Scouts, we have shown our commitment to not only delivering CU but also delivering some aspects of the game at launch that were not part of the original plan. Will we be able to do that? Well, this month we took a really big step forward in that direction.

As always, we thank you for your support and patience. No matter what, please stay safe, be kind, and be strong over the next few months and I hope all of us come through them with as little personal sadness and tragedy as possible. I’ll be repeating that same line until all of us around the world come out of these challenging times.