Last week was a really good one for the studio. Not only was it Thanksgiving, but we also sent out a particularly juicy newsletter. Today’s update is just a little more mixed, but overall, it is a very good one. First, the bad news; we had to defer a few of the P.A.T. #2 items to P.A.T. #3. Why didn’t we just wait till the P.A.T. #2 was done, and just announce a completed list then? Well, that’s the good news. Other than 5 items, not only is the P.A.T. #2 list complete, but we have already made fine progress on the P.A.T. #3 list. So, rather than wait even longer to complete these 5 items and then release a P.A.T. #3 list that has even more checked off items (more than a dozen as of this writing!), we’ll just move on to the P.A.T. #3. In terms of other good news, during the P.A.T. #2 we added 14 items to that list so, it was a net gain if you want to look at it from that perspective. No matter what, it was a pretty successful checklist even without the additional 14 items. With them, I think it was a very successful P.A.T. especially when you consider the impact of our mass Backer and Bot test during the last testing session. After all, 2K Backers and Bots in a small battleground-size space. Not bad, not bad at all. 🙂

Looking at the P.A.T. #3 list, I hope our Backers will like what they see. There are some nice and juicy items on the list, including one that our Backers may be surprised about: the first pass of our building system! As our Internal Testers saw this week, we now have the opportunity to play with the first true building blocks of our building system. 🙂  This item came about when Andrew said that he wanted to “make some shinies!” and well, being Andrew, he did so quite rapidly!

In other CSE stuff, we’ve gotten a lot of responses to our latest survey, but we are still missing a lot of you (well, actually most of you). If you are interested in getting a t-shirt, you need to respond to the survey, since that way we can do a set run of the t-shirts and get lower prices for you folks. Don’t worry, the survey doesn’t require you to commit to anything, but I’m sure you and we would prefer accurate data.

As a bonus item, I’ve included a screenshot from the current build showing a very, very rudimentary implementation of the building system, with a message from our friends up in the northern part of our world. While I neither endorse nor condemn the message, it is quite fitting for that Realm.

We’ll be posting the next P.A.T. checklist tomorrow.

Enjoy the rest of the week! 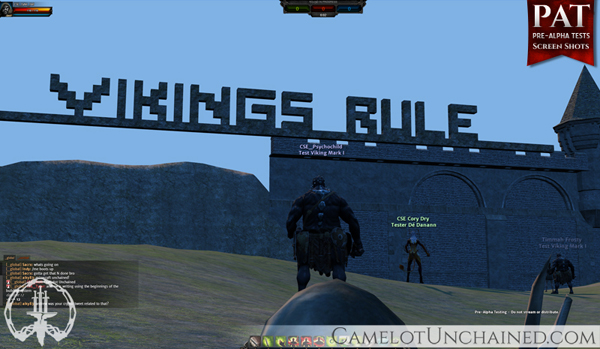