The week flew by, here. The days are busy as we continue to work on features such as crafting, improve performance in things such as buildings, and make the build generally feel more like a game, with more additions of VFX, SFX, and animations on abilities. If you missed today’s livestream, Mark spent a bit of extra time answering questions, so if you’re the curious type, you can catch that stream HERE. For those of you looking for the quick version, continue below with the highlights of the week, and some art below that!

1. WIP – Tech – Building improvements: After successful tests last week, Rob has continued to add more metrics to our building code, looking for ways to improve performance. Rob even co-opted a wall-mounted TV in the office, so he can work while he watches performance changes as players interact with buildings. We have been tackling bugs as we find them, and then continuing to push buildings further. Most recently, we increased the maximum block count on plots from 50k max to 200k max. Of course, we will get a lot higher than that as Rob continues to refine the code.

2. WIP – Tech – Siege Engines: Matt has continued to make awesome progress on siege engines. We’re very close to in-office testing, which is our last gate before opening this up to our Backers for testing. Players are able to make a siege ability in the ability builder, place a siege engine from their inventory, click to interact, and shoot ammo. This is still a very early implementation using archery mechanics, and requires some slash commands, but it’s a big step forward!

3. WIP – Tech – Player damage improvements: When we get new engineers on the team, we like to throw them at some existing bugs so they can dig into the underlying systems to learn how they work. We did that over the last couple of weeks in code related to the wound and trauma systems to fix several long-standing bugs. I wonder who is working on this? 😉

4. WIP – Tech – Bot improvements: We recently spoke about how useful our Bots are for testing new features. Marc has been working on making each bot their own character with their own inventories which allows for a more accurate test of item performance. Bots have also been updated to use the WIP archery skills, allowing us to also test and add more VFX and SFX to abilities. By the way, we’re soon going to change what we call our Bots, as that name can be confusing.

5. WIP – Tech – Item and equipment performance improvements: We’re all about performance, especially work that can improve more than one feature. This week, Christina has been tracking down performance issues we found by using Rob’s metrics work (thanks, Rob!) with items. We’re hoping her recent fixes will improve the loading and the unloading of Bots, because Bots function like players. Christina’s improvements may also help in making our seamless zone transitions still more smooth.

6. WIP – Tech/Art/Design – Ability effects targeting: Gabe has been adding more functionality to the system we use for adding VFX and SFX to abilities, allowing us greater flexibility in adding sparkles and sounds! This will really help make the game more like a game, and will make testing the ability system much easier than watching the combat log.

7. Art – Animation – Polearms: Sandra completed the first pass of a particularly difficult polearm attack animation with more “flourish” than our previously completed basic attacks. We’ll use this to help determine what amount of flourish and style works for our game, and inform how much time it will take to complete the work ahead.

9. Art – Resource node concept art: Michelle completed a quick pass on some resource node models from which players can gather resources, similar to last week’s mine. These will be used temporarily, in lieu of some of the post-Beta 1 tech, like full mines or harvestable trees. Dionne and Jon will be working on these soon.

10. Art – Second pass helmet mats: Jon and Michelle sat down at the beginning of the week for a bit of an art direction pow-wow. That second pass has been completed, allowing Jon to move on to the next item…

11. Art – WIP – Realm-specific torches: Using Michelle’s concept art from a previous update, Jon began working on the high poly sculpts of three torches, one for each Realm. You can catch the stream of that work HERE.

12. Art – Environment – Dock Assets: Dionne has a solid WIP set of dock assets coming along. You can catch that stream from earlier this week HERE, and see the screenshot in today’s update! We’ll use these pieces to fill out the landing areas of our Beta 1 islands, and will add more life, VFX, boat props, and more, to help signify where things will be heading post-Beta 1.

Once again, a solid week, encompassing many features and disciplines. Let’s move into art for the week, starting off with animation.

Last week, I mentioned Sandra had been busy with improved basic polearm/poleaxe attacks. As these are difficult weapons to animate, we figured they would be a good candidate to begin working with, building upon lessons learned with the new greataxe animations. The image below links to a video of WIP basic attack animations. We’re currently auditing how these animations look when paired with abilities that may shorten or stretch the prep and recover parts of the swings. And, as always, these will continue to be WIP for a while as we get player feedback, do more combat testing, and generally hone in on what looks good and works for CU’s combat. 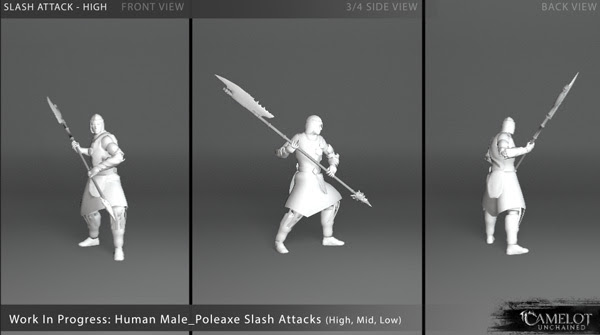 Next up, we have the second, and hopefully final for Beta 1, pass on all the helmets Jon has been working on. Hopefully it’s pretty easy to figure out which helms belong to which Realms, as readability in combat is important. 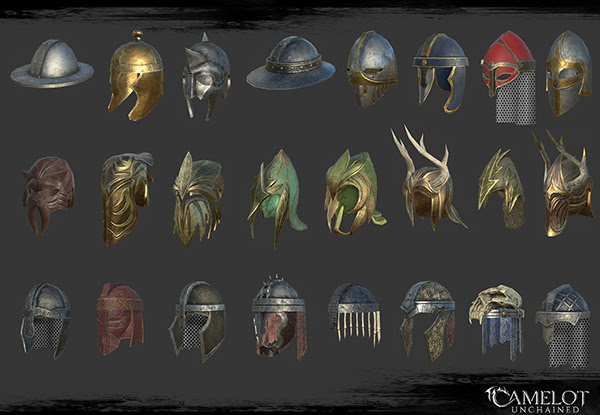 Per our week’s highlights above, Jon was able to begin work on the Realm-specific torches. Below is a WIP shot of an Arthurian variation. You can catch the livestream of this work HERE, and the initial concept art HERE, in which you can see some of the other choices. We’ll be doing one per Realm at this time. 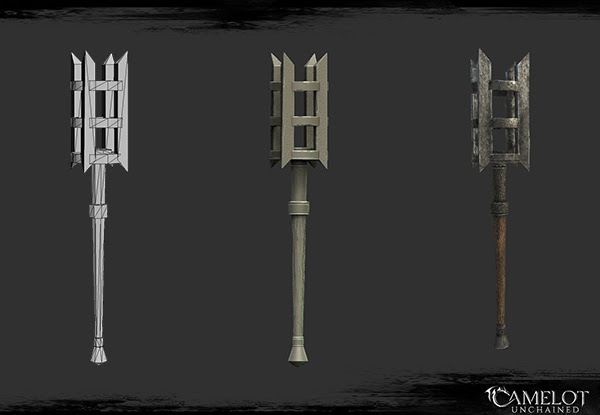 Next up, we have some continued WIP images of various UI elements from Michelle, including health HUD, “alert bar” art, notifications, compass variations, casting bars, title art, and tweaks to full-screen UI design. Again, this is a work-in-progress, is very much in the experimental stage, and will change as we gather player feedback and work on it going forward! 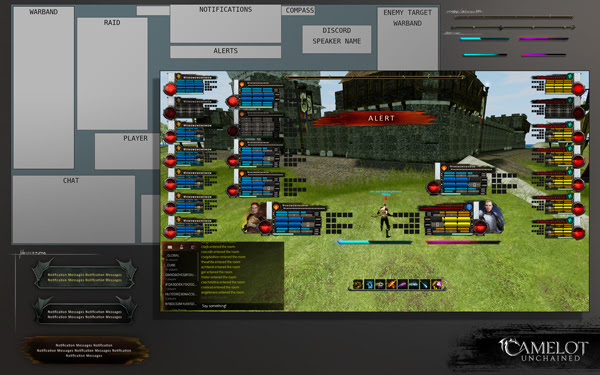 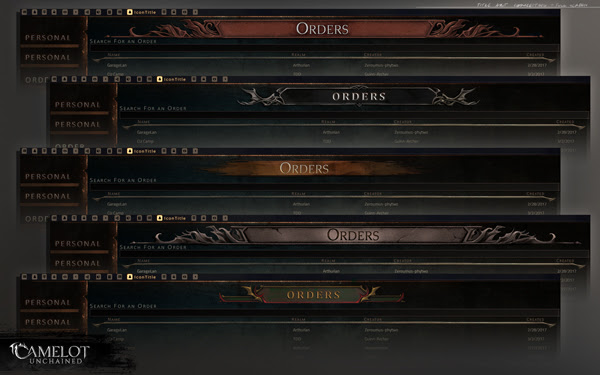 After that phase of work was mostly wrapped up, Michelle livestreamed some concept sketching of resource node models for use during Beta 1, in lieu of post-Beta 1 tech, like mines and harvestable trees. 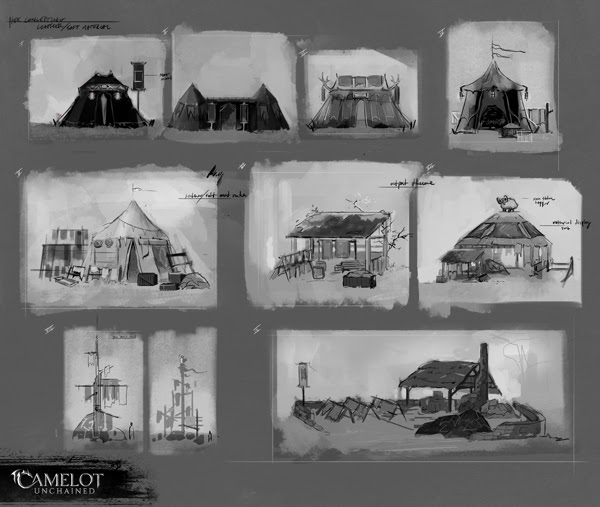 We’ll finish off the art section of our update with an image of a WIP set of pier assets. Look for our update next week, which, time allowing, should have an image of these assets updated with materials, lights, and VFX! 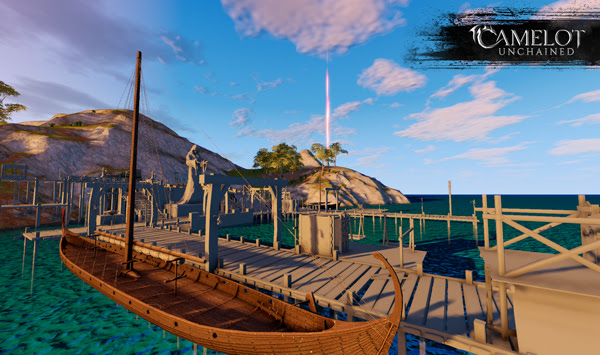 In terms of testing, we have three tests for our Alpha and IT Backers on Wyrmling, Fledgling, and Hatchery. Here’s the TL;DR for the different servers; a full email with relevant links will follow this email.

Wyrmling – VFX and You: Wyrmling has a map filled with VFX, utilizing recent improvements to performance written by George, Dave, and Bull. We’re looking for feedback around your own machine’s performance with info on your computer, ideally with a DxDiag.

Fledgling – Archery VFX/SFX, Crafting UI, Buildings Performance: Fledgling features the very first steps of a crafting UI from one of our Mod Squad Members, Mehuge. We have lots of changes to building metrics this week, so we’d like to do some general building, destroying, plot swapping, etc. We’ve also added more VFX and sounds to the archer class abilities using our new tagging system. We’ve also added a few environment assets, such as a WIP dock, as well as some assets with VFX, for general testing.

Hatchery: We’re going to keep Hatchery open this weekend to IT and Alpha. This build is similar to Fledgling, but should be considered more unstable, and is a live environment. There are a few more crafting UI improvements here, that do not have much testing, and should not be considered safe, yet. For buildings, we’ve put in new network code related to them that has not seen much testing, so expect more instability. We also expect Marc to be running Bot tests over the weekend, and those are particularly unstable in terms of networking.

As Mark said during today’s update, starting next week, we are going to once-a-month User Story updates, instead of the twice-a-month updates. We’re doing this to save some of our producer/lead artist/environmental artist’s time (in other words, it’s all about ME! 🙂 ) as we work toward the opening of Beta 1. As the team expanded, and continues to expand, the User Stories updates were taking more of all of our time to produce, and we want to focus as much time as possible on the most important goal of the studio right now: getting into Beta 1 with a game that we can be proud of, and not a Minimum Viable Product.

That wraps up this week’s Wrap-up. Have a great weekend, everyone!