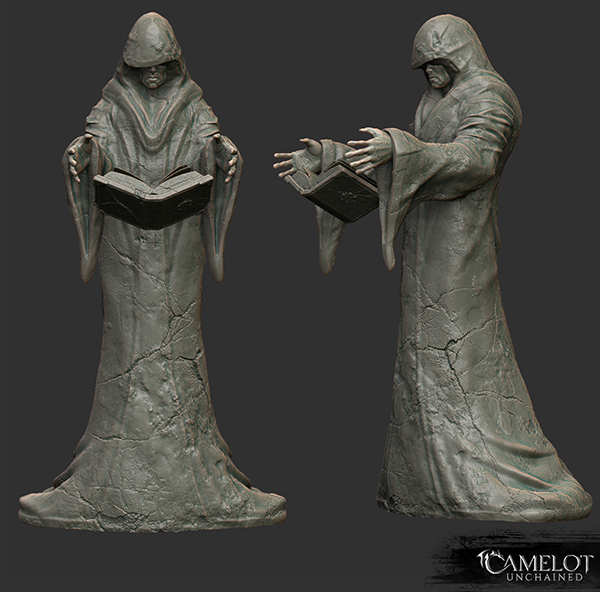 Welcome to another Friday update, where we bring you up to speed on the week’s highlights with our top ten-ish list. We’ve also hit our bi-weekly User Story update, now condensed for easier reading. Progress has been steady this week on several bigger projects, despite the plague taking out several people, including Mark, in the East Coast office. Not one to sit idly by coughing and sneezing, Mark has been in constant communication with us this week, as we also prep for the weekend’s testing with IT, Alpha, and Beta 1 level Backers. More info on that testing to follow in another email for those Backers.

In the meantime, let’s move on to the week’s top ten-ish list:

Despite the East Coast winter plague, we’ve continued to make steady progress gluing together several of our core elements for Beta 1. Even just today, Andrew hit one of his goals for the updated animations system. If you missed it, you can catch his and my update stream from earlier today HERE. (https://www.twitch.tv/citystategames/v/114506920)

For the more verbose breakdown of our progress over the last two weeks, check out our User Story update below. If you’re keen to skip those details, scroll down to this week’s images.

As a Backer, I’d like to find unique environment props, or unique locations, that add flavor to the environment while I’m exploring the Biomes.
World statue ruins x5: High and low poly modeling. – Complete

As a Backer, I’d like to know about smaller changes that don’t have their own user story.
Added slash command to limits the server update rate for the current client – Complete
Increase update speed for WebAPI servers – Complete
Set up network states for entity components – Complete
Create entities from terrain spawned items – Complete

As a Backer, I want to be able to own a plot of land and build within it. – First Pass
Support rectangular structures inside CylinderMorphs.  – Complete
Harvested resources can be used to build buildings. – Complete

As a Backer, I’d like to see graphical and networking performance improvements, when building and destroying structures.
De-rust buildings and building UI for testing and metrics gathering – Complete
Improve damage output for buildings in combat log – Complete

As a Developer, I would like more insight into the state of the server.
Add feature to server config to force players to spawn when connected to a single server – Complete

As a Backer, I’d like to see improvements in server stability, speed, and robustness.
Improve auto-restarts – make noisy message on the console and make it easier to configure intervals – Complete
Split out hard launches and soft launches from each other to prevent interference between the two – Complete
Implement exponential backoff to space out repeated transmissions – Complete
Check addresses when checking proxies. – Complete

As a Developer and Backer, I’d like to see improvements in memory usage and threading.
ParLL – Make it possible that simple jobs can be done immediately in place if there are no conflicts. – Complete
RunOrSplit (in ParLL) now has firmer order guarantee. – Complete
ParLL guarded data will now get caught and logged. – Complete

As a Backer I’d like a patcher to not only update my game, but also give me the most important news and updates, get support, chat with the community and look awesome while doing it!
Update the patch client to support providing a unique server address per character on log-in. – Complete
Grant permissions to Beta2s to install the patch client. – Complete
Grant permissions Beta2s to use chat. – Complete

As a Developer, I’d like to see improvements in the editor to facilitate my work.
Add tags to trash items that are safe to delete. – Complete
Have Tag changes populate to any connected editor. – Complete

As a Backer, I want to seamlessly move between islands and zones without being aware that I’m moving between different game servers.
Update webapi server for presence controller – Complete

As a Backer, I’d like abilities to play sounds.
Expose functionality to preview sounds in editor. – Complete

As a Backer in Beta 1, I’d like to be able to further personalize my character through the use of the Banes and Boons system.
Tagged expressions. – Complete

As a Backer in Beta 1, I’d like the set of animations the player uses to be controlled by the player’s stance, equipment, and other such gameplay factors.
Add sound effects to stance changes. – Complete

Not a bad way to wrap things up. Let’s move on to the art!

For this week’s images, I have to add a small preface. Early in the week, Jon pointed out that the work he was tasked to do wasn’t too exciting to stream. So Michelle and I put our heads together and requested he make some statues to be used throughout the world. The goal here is not only do we get fun and unique things to run across in the world, but we also play to Jon’s strength as a very talented digital sculptor. And it’s fun to stream! I was expecting one, maybe two statues. He knocked out five in a day!  Here’s a sampling. You’ll have to find the rest during your in-game wanderings. 🙂 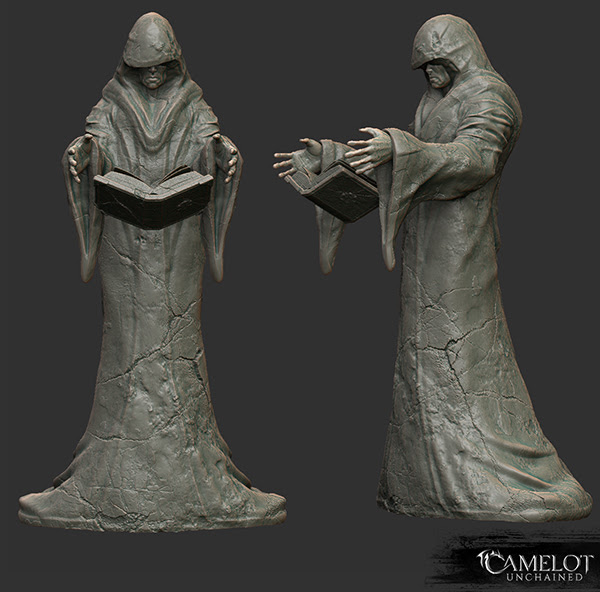 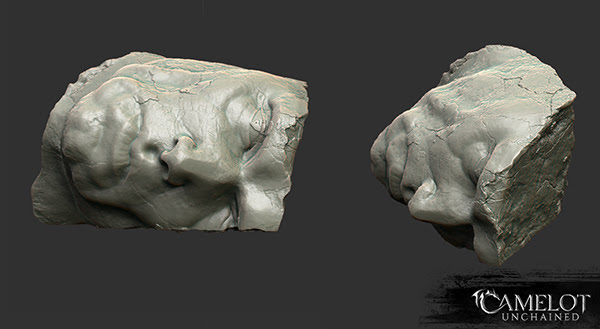 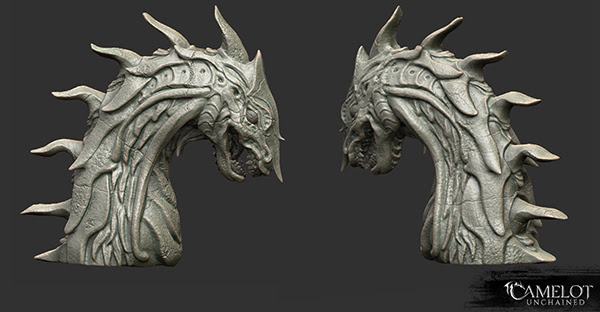 The fun thing, from my perspective, is that we can play with not only the scale of these guys, but also break them up to show age and history in our world.

Jon, Michelle, and Dionne have continued to work on our first Place of Power for Beta 1. First off, Jon updated our giant floating dragon tooth: 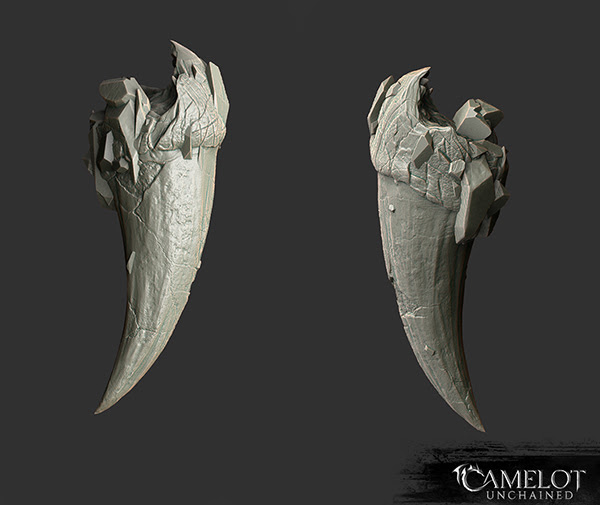 Neat, Huh? Giant floating dragon tooth. Metal enough for you?! Next up, we’ve got a bit of concept art from Michelle, who quickly updated the PoP art to compensate for some changes we made to facilitate gameplay. 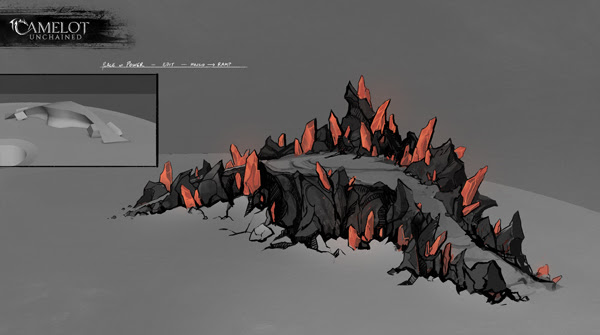 Okay, that wraps up this week’s update. As a reminder, we’ll follow up with a separate email that has weekend testing details for IT, Alpha, and Beta 1 Backers. Have a great weekend everyone, and thanks for your enthusiasm and support.