Happy Friday, all! This will be a short but fun update. Lots of stuff going on in the studio: Progress is being made on all fronts, and we have some fun concept art and in-game screen shots to share with you. Since this is a middle update, I’ll just focus on a few things.

First, here are some pieces of concept art from Michelle. They represent higher-end swords from the Arthurians. 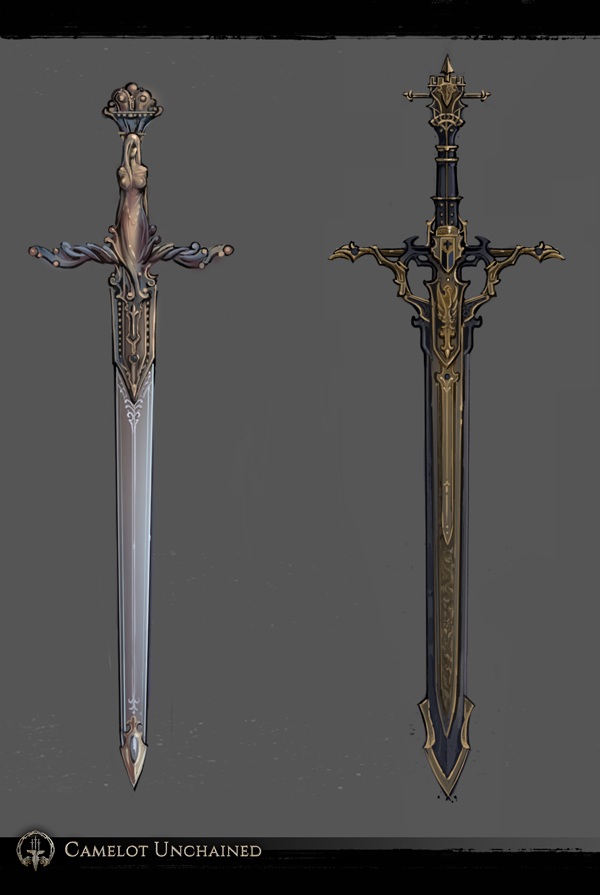 Next up, some swords for the Tuatha Dé Danann.  They are more ornate, and have a distinctly different look from the Arthurians. 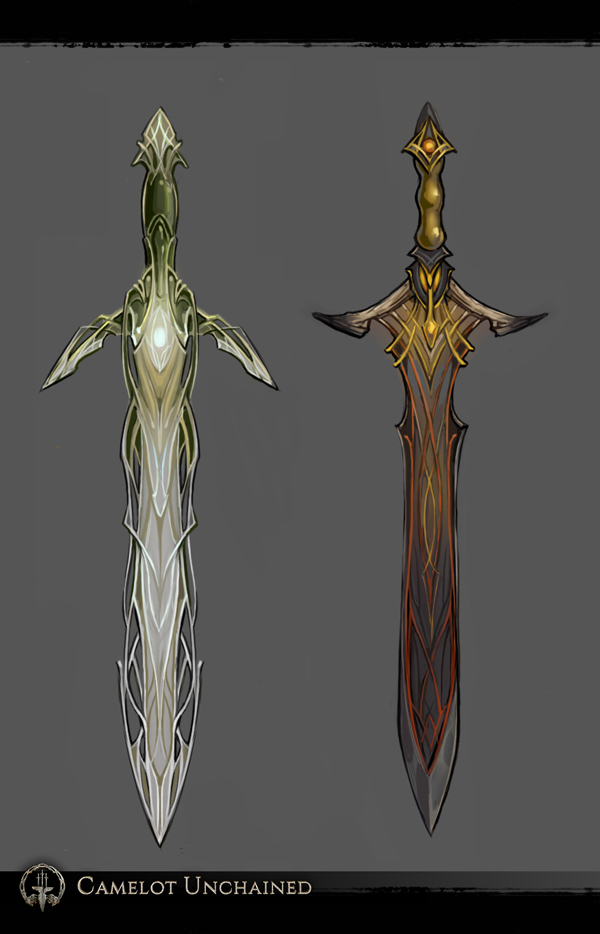 Sorry Vikings, no swords for you this week. The undermanned Tuatha Dé Danann and Arthurians made a truce and stole them from you! 🙂

In terms of going from concept to in-game, here are some WIP pieces on the untextured models of some axes and swords. 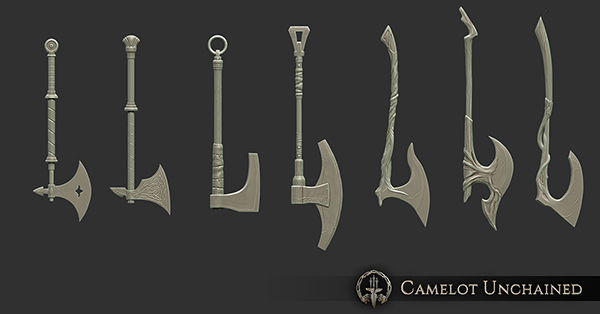 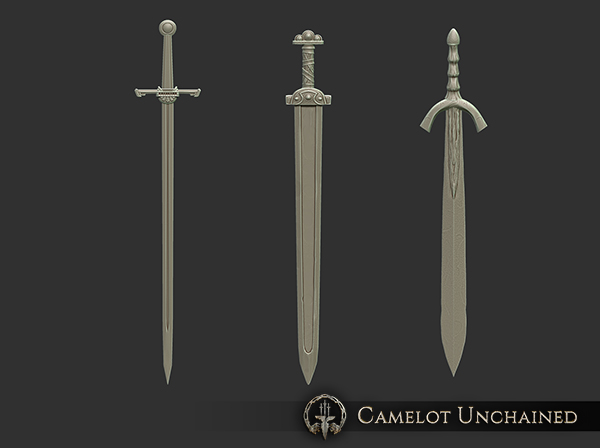 But CUers don’t live by swords and axes alone, so here’s a screenshot of some of the improvements to our PBR system, with water/fog. 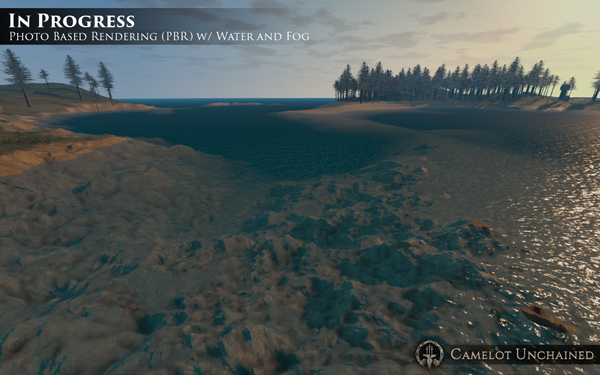 Please excuse the shiny trees, that should be fixed by next week.

As our Forum-goers saw yesterday, we’ve been making a lot of progress in terms of rendering and networking just a few buildings and blocks. And by just a few, I mean, a whole ****load of blocks. Say, 181 million on a server for starters, and 8100 buildings total, with between 400-500 in your viewing frustum at any one time.  As you can see from these three screenshots, even before making a major pass at optimizations, we were at 36 FPS, even with our huge draw distances. Unlike so many games, those trees in the background are our actual forests; they are not a fake backdrop. The first screenshot shows just how many buildings you can see at one time and still have a decent performance. BTW, this is on our current Hatchery build, this is not a C.U.B.E. shot so this is working in Camelot Unchained! 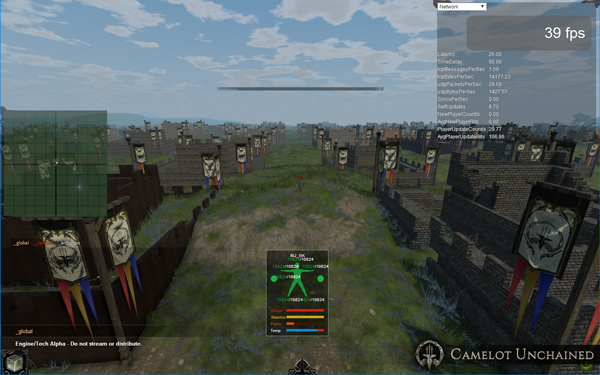 BTW, look at how far we have pulled back the camera to give you a better view of the world. Each of these buildings are between 15K-30K blocks  per building. Oh, and please, please, please keep in mind that the distance between buildings is not representative of what it will be like in the game, that would be horrible. This test was meant to see how far we could go before the engine broke. FYI, it still hasn’t broken, and even at 8100 buildings the game was still playable. Next up, a shot at dusk with a forest in the background. 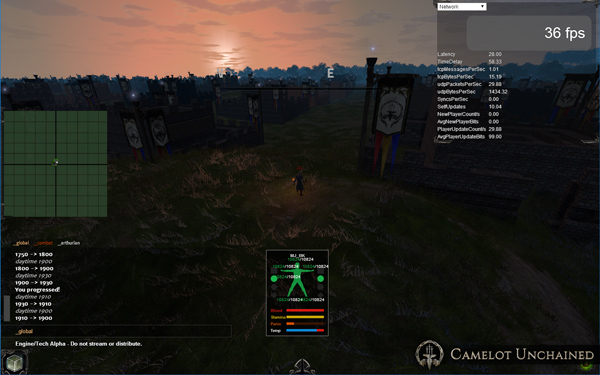 Finally, a shot at night. Notice the glow from each of the buildings. 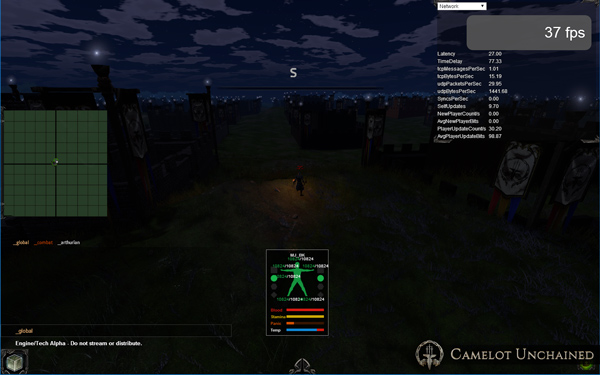 Not bad, eh? Yeah, not bad at all! 8100 buildings, 181M blocks, and 400-500 buildings in your frustum with no culling. And today, we turned down the number of buildings and increased the distance between plots, and the frame rate went up accordingly.  And again: the distance between the buildings is just for the test, please don’t think we want something that is even close to this. Each player needs enough space on their plot to build a big castle and have plenty of room between them and the neighbors, which is why we are building large islands. 🙂

Have a great weekend, all! A much larger update is coming next week, as usual.