It was a great week here at City State Entertainment, a really great week. Why? Because not only did out Big Bot Testing resume, but it resumed with a vengeance. How much of a vengeance? Are we talking the kind seen in the Sergio Leone classic Once Upon a Time in the West? Yeah, that kind of vengeance. Let’s just go to the Top Ten-ish List, and you’ll see what I mean.

WIP – Biomes: Improvements all around to the autumn biome – Tyler and Dionne are currently adding new assets and tuning existing assets. We’re also doing an update to the biome settings in general, to add more variation to the terrain.

If Item #1 hasn’t grabbed your attention yet, here’s a screenshot from it. 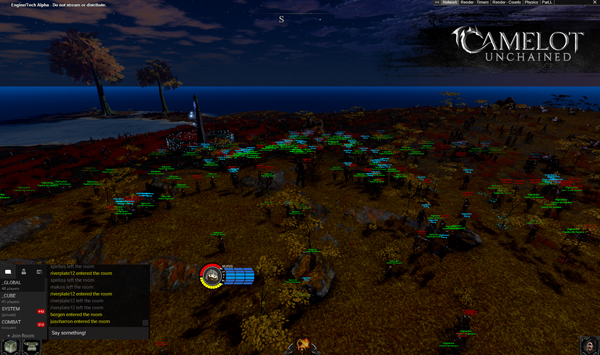 Can you guess how many Bots (headless clients that consume more server bandwidth and CPU than a normal player) I was standing in the midst of? 300? 500? 1000? Surely not more than that, right? Well, actually, just about 2,000. That’s right, I was flying above the a crowd of about 2K Bots and not only didn’t the game crash, but it performed well. And if you were thinking that the vast majority of Bots were far behind me, nope, there are just about as far apart as is the group you see in that photo. Still unsure? Here’s a daytime shot. 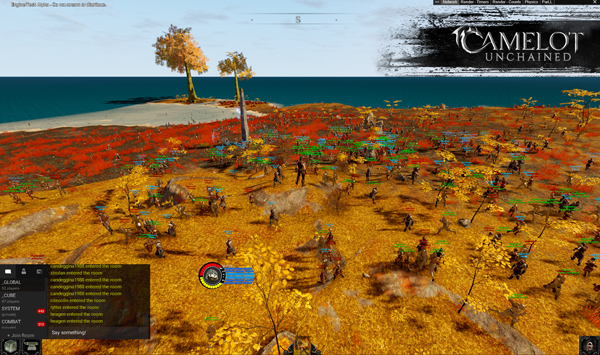 But wait, I bet some of you are thinking that even so, “I bet you couldn’t walk in the middle of them!”, right? Well, here’s another shot from the same test. 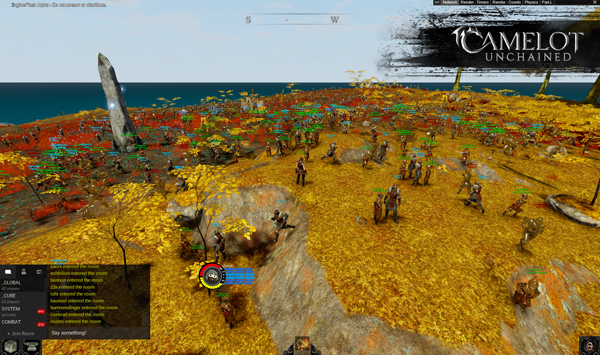 So, not bad, right? Two Thousand Backers and Bots in a tiny area and I could run around. Now, we are not all the way there yet—we still have to add abilities firing off—but that’s coming soon. And while that will impact the FPS, we have a lot of room for optimizations on both the client and server side. And, even more importantly, it means that battles in the low hundreds (say 300), would be easily handled by the network layer, and we can always optimize the client by culling effects from distant fights. Therefore, if you thought we couldn’t pull off our claim of large-scale battles, we are rapidly approaching the point where you will see just how our engine can handle the kind of game that so many of us have been waiting decades for. And BTW, the card I was running it on was a GTX970, a two-year-old card. A powerful one, of course, but still a two-year-old card while playing an Alpha game. It’s not time to get on the hype train yet, but as I said a few updates ago, the light from the tunnel gets ever brighter and closer. And if you have any doubt about how special what we are building here is, ask yourself how many other MMORPGs can handle even 300 people in a small area. This weekend, we will give all our Alpha, Beta 1, and IT testers a chance to see this in action.

For today’s art, here’s some concept work for the new moons that we are working on. More is coming.

Next up, how about some pieces of the Fall Court armor of the Tuatha Dé Danann? 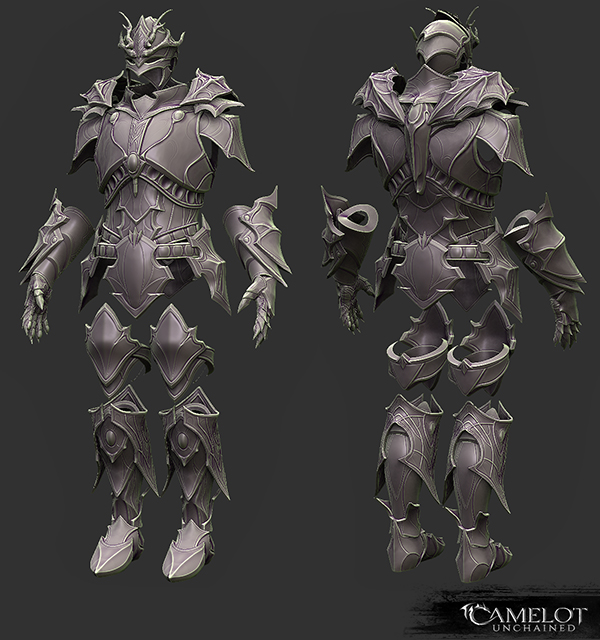 I’ll leave the Land of The Artists with, fittingly, an epic ax. 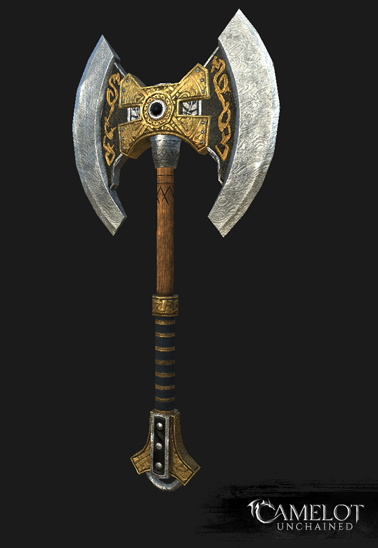 Whew, a lot done and covered for the smaller of our weekly updates. A few bits of housekeeping:

That’s it for today’s update. BTW, if you want more info on our Big Bot Tests, I’ve posted a bunch of stuff on the Forums. I hope you enjoy what you see there, and what you saw in this update, especially the Big Bot Beltway Battles. I cannot emphasize how important that getting to this step on the long road to Beta 1 was, and will continue to be, as we move into and through Beta 1. We promised you large-scale battles, and that’s what we will deliver, far sooner than you might have expected!

We are currently running a Big Bot Test on Wyrmling this weekend. We had to put a little bit of overtime tonight to get it up and running, but it’s there and waiting for all of our Alpha, Beta 1, and IT Backers to come join us and 360-500 (numbers will vary) of our Bots for a weekend by the sea. Couple of things of note before you go into the test:

The test will run all weekend unless something goes horribly wrong. Please post all bugs on our Forums HERE – https://forums.camelotunchained.com/topic/15383-big-bot-testing-nov-18th-21st/.

As always, we thank you for your support and patience!