Another three bite the dust!

It’s been a really good week here in the studio on almost every front (hey, nobody’s perfect). We have a lot to talk about, especially for a “off” week (next week’s update will include User Stories), so let’s get this started.

First, we have some Beta 1 Checklist items to actually, you know, check off the list! It has been a while since we were able to do that, but hey, better late than a POS product, right? 🙂 As to the items:

As always, we will be honest with you folks about the checklist. We’d rather wait a little longer to check something off rather than do it too soon and backtrack from that afterward. We had to do that with the ability system, and we have no intention of repeating that mistake.

You may have noticed (it would be hard to miss) that over the last year, the size of our programmer team has almost doubled. While it might not seem like we have been making the progress that is expected from that increase, there are a couple of things to keep in mind:

I don’t want to riff on my catchphrase from the WAR days and say “Beta 1 is coming,” but the truth of the matter is that it is indeed coming this year. As we’ve said before, once Andrew’s new animation system and George’s improved VFX systems are in place and working as needed, we will have a lot more clarity on the release date.

During game development, things change a little bit, sometimes even more than a little bit. Sometimes it is for the worse, sometimes the better. In this case, we’ve added two more items to the Beta 1 Extended list that are both important and needed for going LIVE. These two items are almost done, and therefore we can say with complete confidence that they did not, in any way, delay Beta 1. In all likelihood they accelerated our push, because we solved problems that we would have had to deal with eventually, anyway. Fortunately, we solved them ahead of time.

Not bad, not bad at all, eh? Three items off the list, two new ones added that are almost complete, and we might have another one that is also near completion. As I said on the Forums, step by step, feature by feature, we slowly but surely build the game and engine to deliver on our Kickstarter promises.

For today’s Top Tenish list, we have a few nice wins again this week.

To our German and/or German speaking Backers: The update for the site is complete, but it still needs final review. We had to push this back to next week, simply because this week was very focused on Beta 1 work. Apologies for the delay, Tyler will try and get this finished up next week.

Once again, another great Top Tenish list.  As you can see from the list’s items, more and more gameplay is being focused on and delivered by the team. And more is coming, lots more.

As usual, let’s take a look at some great stuff from the Land of Art, Animations, and other Purty Stuff!

First up, a polearm animation image. This is a selection of key poses from the polearm animation work. As you can see, this weapon type is very different from a spear or sword, and adds more breadth to the types of weapons you can use. 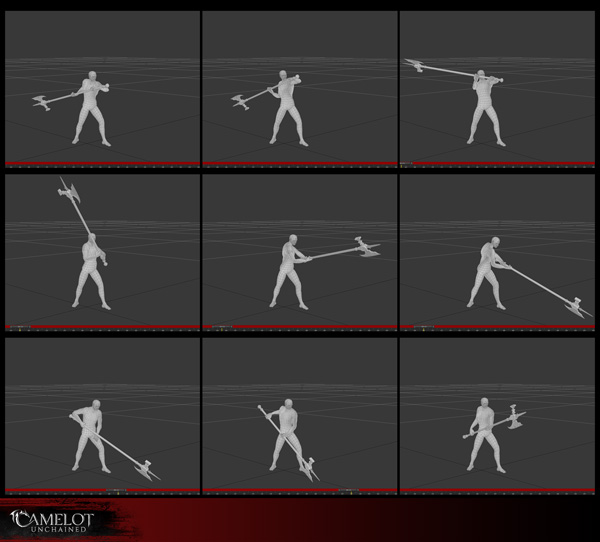 Next, how about a selection of placeholder icons for the Banes and Boons UI. If you’re looking for a bigger size to this image, there isn’t one. Icons are small! 🙂 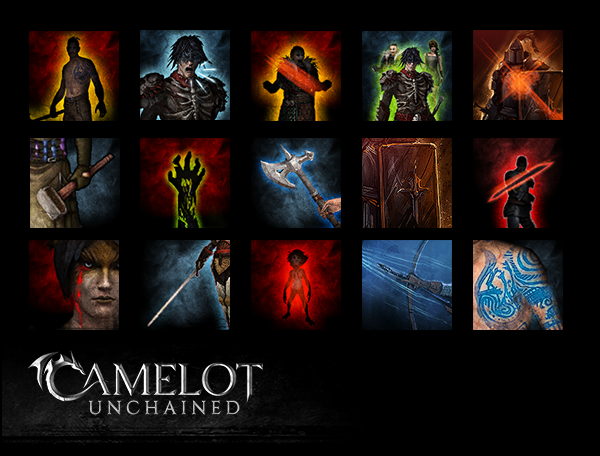 Here are raven and lion statues for the game. We took a quick pass on updating the statue materials in the Place of Power. This treatment had a short learning curve that we quickly fell in love with. What was learned here will inform the polish pass of the Place of Power materials, as well as future environment art. (These shots are within the material editor.) First up, the raven statues. 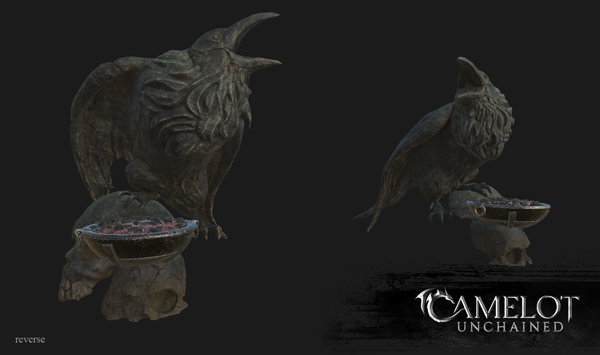 And now from the opposite angle. 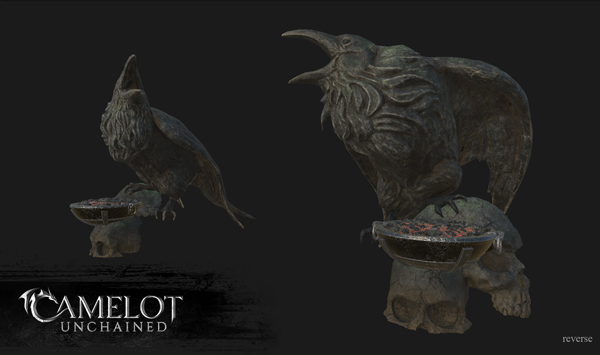 And what did the raven say to our next guest, right before dinner? Nevermore! 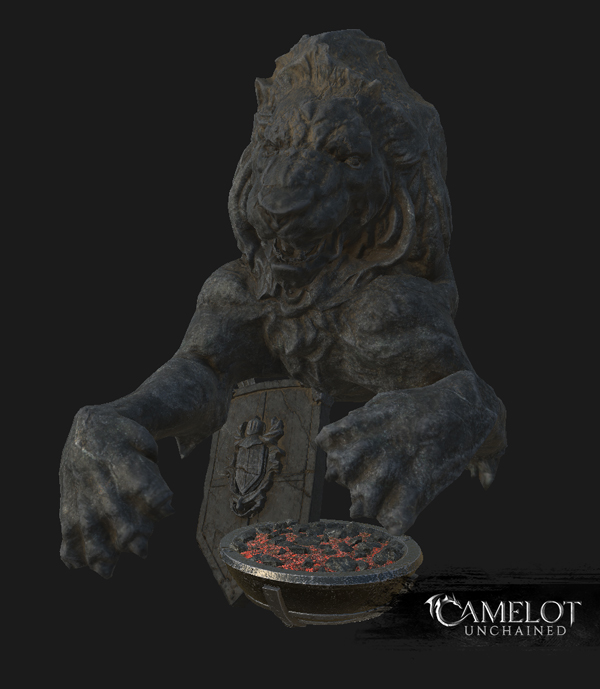 Speaking of materials, why are they like ogres? Because they have layers! Per our top ten, Mike is working with a series of physically based surface scans (like the PBR system in our game), and mixing them up to create terrain assets that will be easy to audit in the future, in order to add a bit of CU styling on top. The image below shows the different maps we use in our terrain materials. The albedo, or color layer without lighting information, is first. The normal defines how light behaves across the surface, defining the much smaller surface details. This map is technically pretty old school at this point. The roughness and specmask are part of our PBR (Physically Based Rendering) update. While not necessarily a very new concept, the PBR use is still not widely adopted in the gaming industry. The roughness map defines how rough the surface material is. Who knew? Simply put, this defines how spread out the light is across the material, and how smoothly it blends into the shadow side. Dirt is very rough and has a very wide highlight, while a crystal would have a very tight highlight. The specmask defines how bright the highlight is. Those last two really help us visually differentiate materials from one another. The final black and white texture at the end is a recently introduced height map, which we are using as a “blend” map, with white being higher in vertical distance than black. We use this to more accurately blend materials in the terrain together. The introduction of this map may allow us to do some fancier shader techniques at a later date. Once we start adding these new materials to the game, we’ll get some side-by-side shots for you folks. 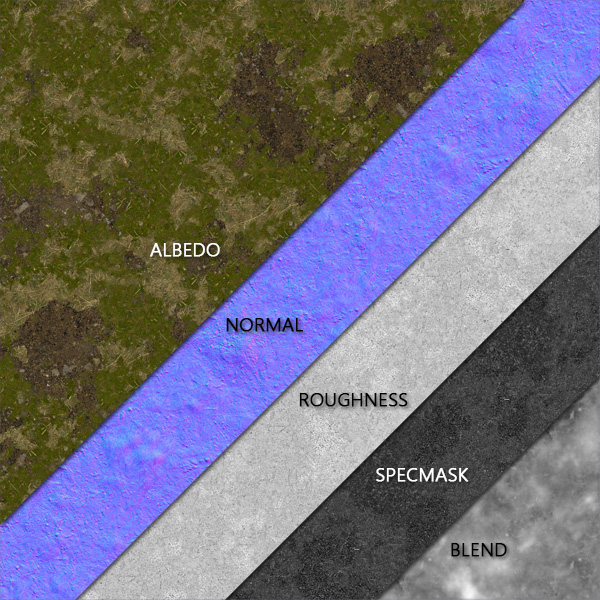 It’s only fitting that since we led this section with some polearm animation tidbits, we should show off some concept art for the weapons that will use those animations. Michelle gave us the difficult task of picking our favorite TDD polearm designs from this concept art. Typically, we pick the hardest one to create so we can vet our process. However, since we’re good on process at this point, this will surely be a “that one is awesome” type of discussion.

Finally, for those post-Valentine Day blues, here’s a Valentine bloodwood axe – If any of you caught Michelle’s Valentine’s Day stream (https://www.twitch.tv/videos/122110008) this week, you will recognize this themed axe concept. Will it show up in game? Time will tell. 🙂 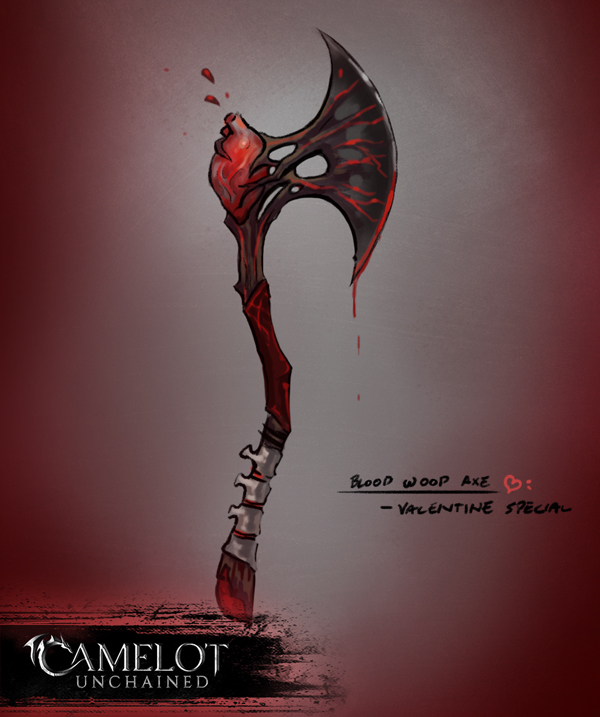 There will not be an Alpha test this weekend, as we wanted to focus this week on landing all the things covered above. As such, while we got a lot of things in, this current build is definitely not ready for Prime Time, but I expect that will change for next week. No promises, but I’m hopeful that next Friday we’ll be able to open the servers for some serious testing.

BTW, did you folks catch Tyler and Andrew’s End of Week Wrap-Up today? If you didn’t, you missed a fun time, and a short, but informative .gif from Andrew showing a piece of our animation timing. If you didn’t, you can find it here (https://www.youtube.com/watch?v=kLpddv0e4W8). Once again, step by step…

Have a great weekend, folks!