Hey all, it’s week’s end, and it has been a very good week indeed! First though, to those of you celebrating the Fourth of July, Happy Holiday! FYI, we’ll be out next week until Wednesday with a much-deserved small break to enjoy the celebrations ourselves! Even though this isn’t a User Stories update week, we have a whole lot of “explosive” content to share with you. First, we’ve broken our record for the size of our newsletter as we have the largest one to date for your reading pleasure, including some Texas-sized articles from Scott, dB, and Ben! Then there’s our Top Tenish list with lots good stuff for this week, plus the images below. Without much more preamble, let’s get into this week’s highlights, which are, as usual, more than ten–fifteen, to be precise.

1. WIP – Tech – Shadow Improvements: Following up last week’s work, George has completed another pass on shadow quality. Some existing artifacting has been removed, and shadows are crisper now. We’re also rendering about 16x less shadow when looking straight down, and about 4x less when looking at long distances. This means we’re rendering fewer shadows that are already outside your viewing frustum. Should be a small performance gain, depending on different factors, like time of day, view, etc. As per the title, this is a WIP, so please keep that in mind and let us know if you are having a different experience during testing (slower, less crisp, etc.). And don’t forget, a DXDiag is necessary to help us to help you.

2. WIP – Tech – Archery Animations: Andrew has been hard at work getting archery animations hooked up. This has involved adding cosmetic functionality to the ability system in order to play specific animations during different phases of an ability, as opposed to just making archery animations play. This first pass went in this morning. Towards the end of the day here, he was able to get IK (Inverse Kinematic) aiming movement of the character’s arms and bow working, which really improves the look of aiming. After that, he’ll work on putting an arrow model in the bow and Sandra and/or Scott will take a second pass at the animations.

3. WIP – Tech – Siege Engines: Matt continues to fix little issues we’ve uncovered through playtesting. Most recently, we’re better handling how siege engines and player movement play together. There was a fun bug when players clicked on a siege engine while moving the camera: The focus would switch to the siege engine aiming, but your player character would keep running…away…into the sunset. In addition to this update, he’ll soon be landing an “exit” button that will allow players to quickly exit their siege engines, replacing the ‘/siege exit’ command.

4. WIP – Tech – Building Segmentation: Brad is following up his previous work on the encoder/decoder changes last week to improve performance for C.U.B.E. structures. Buildings on the client can now apply changes to only the segments that have changed, without having to compare the old and new building. The server-side piece of this work is now in review. These changes not only reduce network traffic but also reduce the amount of work the client and server have to do, significantly improving performance.

5. WIP – Tech – Moving Items in Inventory: Christina and AJ have been working together to set up API calls to make the new player inventory window function. In doing so, they’ve found a few fun things to fix and improve. For example, in testing, Christina found that you could put a container in a container that is in the first container, creating a container black hole that might have destroyed the universe. We’re gonna fix that. 🙂

6. Art/Tech – Happy Birthday, America: Gabe fixed an issue preventing our impact explosions from remaining in the scene. Doing so gave us the great idea of making our bow and siege abilities a bit more patriotic for the holiday weekend. Mike, Gabe, dB, and Ben all contributed to the new updated changes.

7. WIP – Art – VFX on Abilities: Mike and Ben have continued to work in tandem this week with a first pass on bow-related abilities. All different arrow types have a primary trail effect, with a secondary effect such as poison or fire, and where applicable, an impact effect. Mike is also moving ahead on some generic on-target effects so that we’ll be ready to test those when the appropriate tech is complete. Ben has also begun breaking down the work necessary for the healer classes. Please note that while our 4th of July effects are on all our arrows, you won’t see the permanent VFX on them.

8. Art – Realm Portal Models: Jon finished up all three Realm models this week, including a material pass. With Michelle’s oversight, he and Dionne began to conceptualize what these may look like if a different Realm controls the area. Images below!

9. Art – Combat Animation: Sandra completed the second-pass animations for dual-wielding a club/mace and sword. The first pass test last week went well, so this has been more of a look-and-feel pass with stronger posing and timing and better clarification between slashing weapons, such as swords, and crushing weapons, like maces.

10. WIP – Art – Combat Animation: Scott began work this week on updating the old greatsword animations. There are some fantastic choreographed swings provided by Ben that we’ll try to retain. We’re taking the old, seven-part animations (which were placeholders), and bringing them up to date with all the improvements in the new system, or in how we approach the work.

11. Art – UI and Concept: Michelle was instrumental in clarifying how a Realm-specific portal statue would look if an opposing Realm took over the territory it resides in. This cohesive oversight is something very important to us as we determine what level of detail is necessary to convey a Realm’s influence in the world. Below, we’ve included the concept images which helped Dionne and Jon in the material pass, as well as some additional UI concepts from Michelle.

12. WIP – Art – Battlegroups UI: James Koo has been steadily working through the UI needs of both the Battlegroups and Inventory this week. As with much of his recent work, he’s created a whole host of new icons, which we’ve included an example of below. In addition, we’re showing you the current WIP mockup of the Battlegroups UI.

13. WIP – SFX Attached to Animations: dB and Scott have been working on the new tech we added last week to add sounds to specific frames of animations. This includes all the different walk animations, as well as jumping and landing. As we work out the kinks, we’ll use this tech for more things, such as equipping weapons, falling, emotes, dying, etc.

14. WIP – Environment – Mines: After wrapping up the library of dock assets for the time being, Dionne helped out with materials on the aforementioned portal statues, and has now begun fleshing out some pieces for the interior of mines, and some large caverns as well. We plan to see if we can get something in for Beta 1, while the full “bubble tech” will be coming along later in Beta, as planned.

15. WIP – Additional Environment Assets and Organization: Last, and in this case certainly least, Tyler has been using his minimal spare time to reorganize the environment assets to ease building out our zones. Time allowing, he’s trying to add a few more terrain textures and assets during this work. Currently, he’s adding in more things to improve the look of beaches.

Fifteen items this week, eh? That’s a bit more than average, which is a nice way to end the week as we go into a longer holiday weekend. As a reminder, we’ve moved our User Stories update to once a month, in the middle of each month, so they are not included this week. Let’s move to the pretty pictures! As mentioned above, George made some changes to the quality of shadows in our game. I was just quick enough to get a “before” image moments before the build completed. This isn’t the most accurate comparison ever, as the time of day and position is slightly different, but I hope you can see the change in quality! 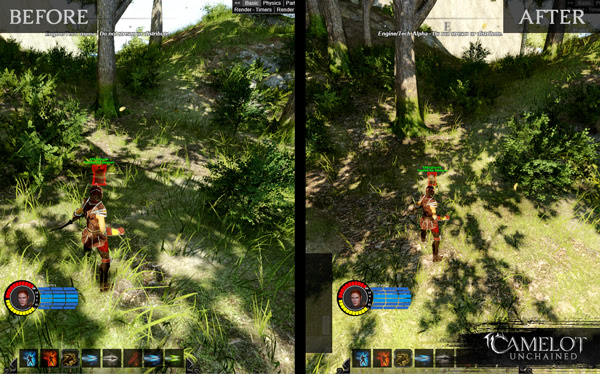 Next up we have a WIP animation of the two-handed greatsword swing mentioned in the Top Tenish. You can catch the livestream of Scott working on this HERE. 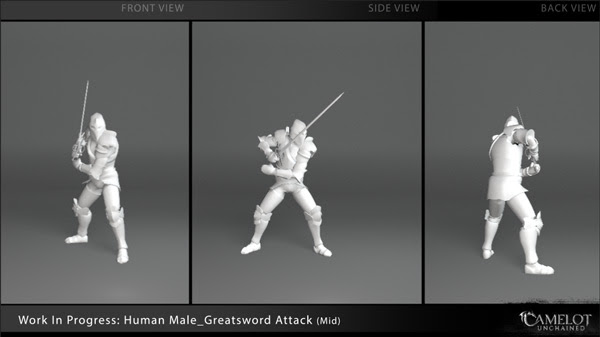 Next up, we’ve got a WIP shot of the TDD portal model, with and without a material pass. This will go with the Arthurian and Viking statues shown last week. 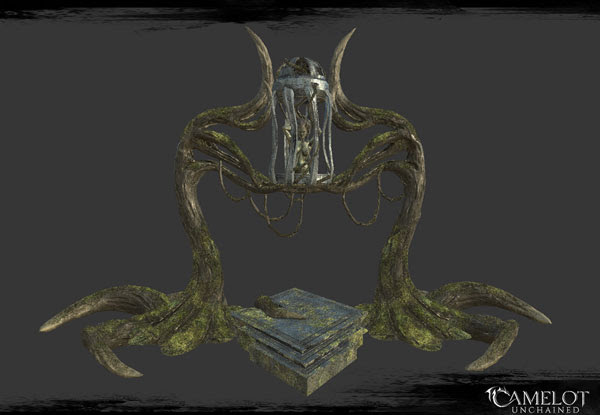 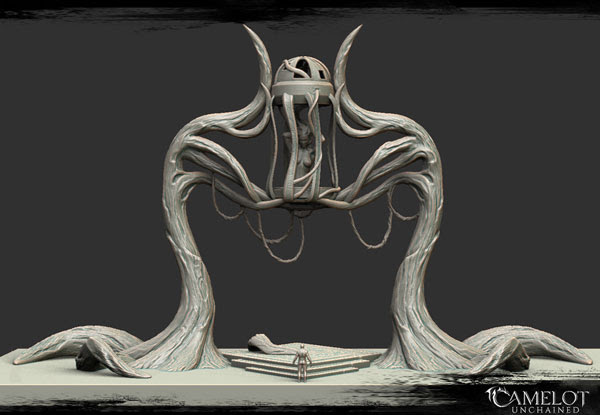 Here’s the concept art mentioned above, which Michelle provided to Dionne to show how Viking portal may look if an opposing Realm takes over the local territory. The second image represents taking it a bit further, with VFX and other propping around the models. 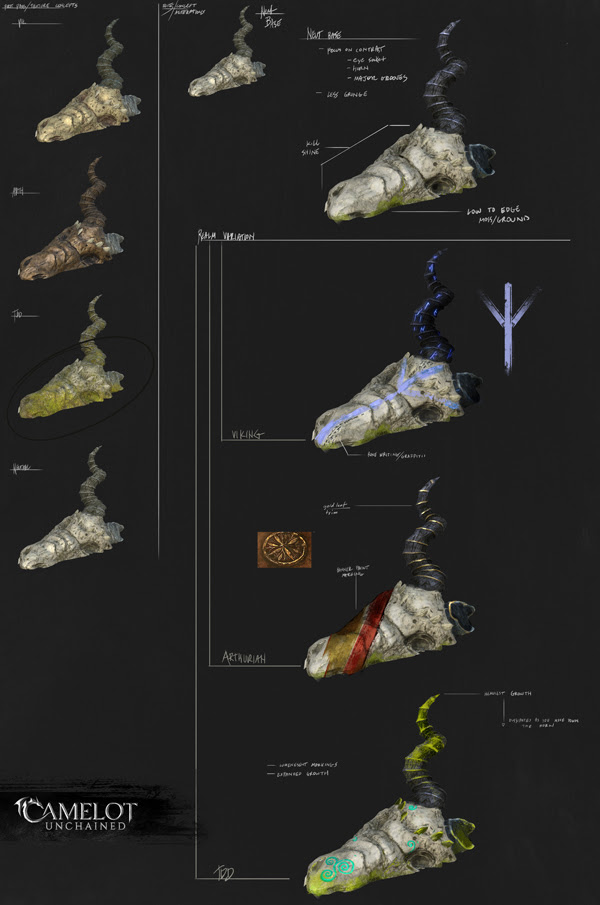 Moving from environment art, we head into UI land. First up, a whole pile of inventory icons James has been busy working on. 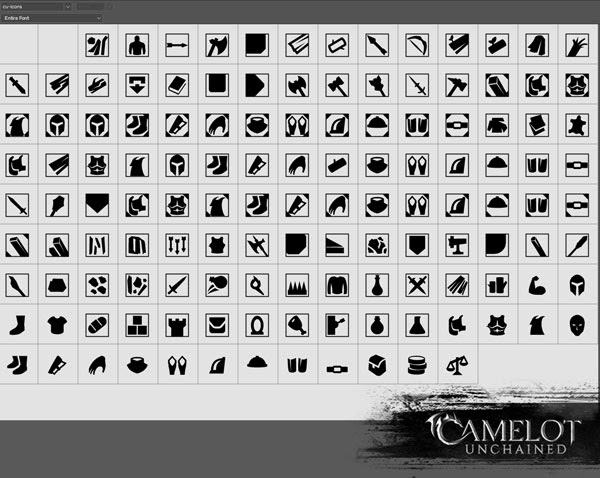 Next up, a styling treatment from James for that inventory UI. Remember this is just a WIP concept. We plan to have plenty of ways for players to tune the UI to tailor their tastes. 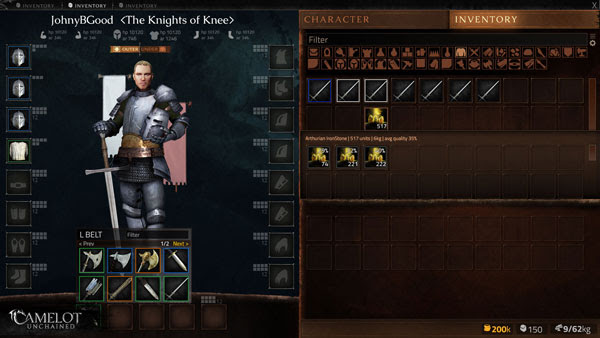 Here’s a styling treatment for the Battlegroups UI, currently in progress. 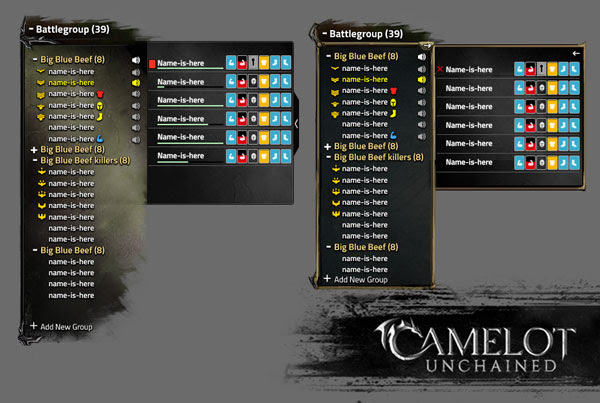 Lastly for UI, we have several treatments for menu bars from Michelle. Have you got a favorite? We’re focused on a simple and functional pass on the UI for B1. Later, we can get into more styling. 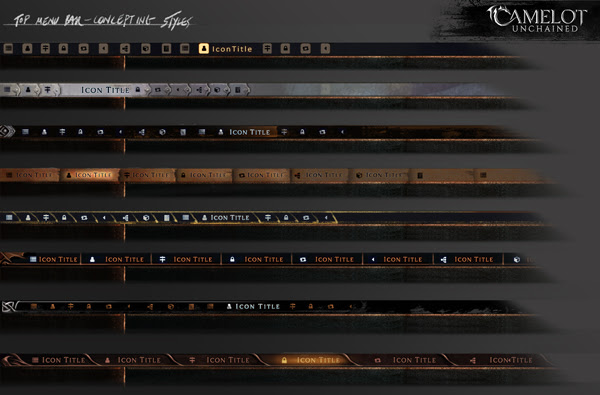 About testing this weekend: We will hold a test on July 4th for our Alpha and IT Backers in celebration of the birth of the United States of America. If this test goes well, we’ll open it up to our Beta 1 Backers the following weekend. We are trying to fix two new client crash bugs that reared their ugly heads during this week’s testing. Once they are resolved, Beta 1 folks, you’re up next. And of course, we’ll save the 4th of July version for you folks to enjoy as well!

Well, that wraps things up nicely for us here. We got a lot done, not only this week, but recently, in making CU move from tech to game. If you have not joined us in any of our tests lately, please jump in the next time you can. Try gathering some resources, crafting blocks, and make a building. Be careful, though. As we’ve been adding in better animations and new VFX and sounds, people are more likely to come thwart your building plans. Check for an arrow to the head, a greataxe swing to the legs, or for the next week or so, an explosive celebratory greeting! Here are three screenshots from the latest building with 4th of July arrows doing their thing. These are work-in-progress VFX, and were made for testing and celebratory purposes! 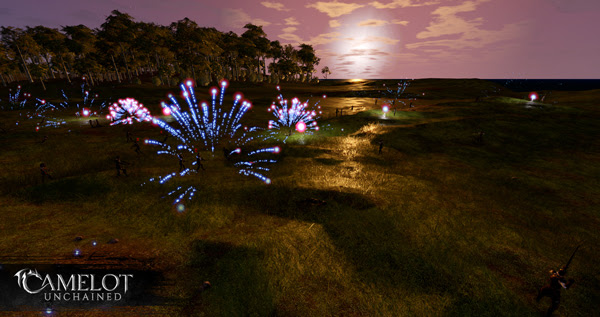 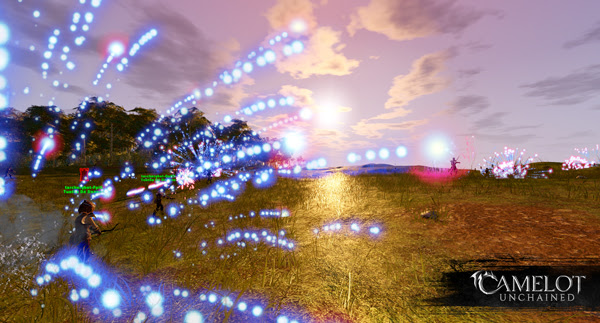 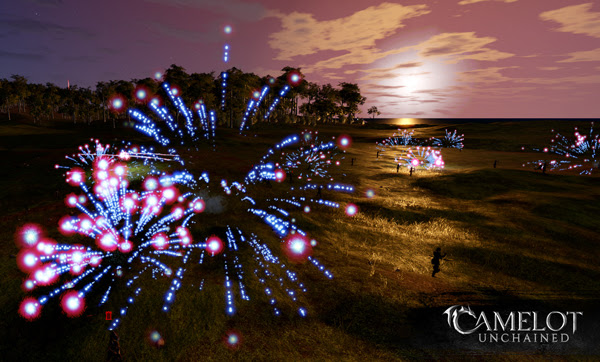 Have a great weekend all, and CU next week after we at CSE take a much-needed long weekend!