Folks,
Hey, it’s Friday already?! I’ve said this before, that sometimes we’re so busy, that the days just fly by. This week was doubly quick as it was a short week for us coming back from the longer Fourth of July weekend. Regardless, we got straight to work with a big focus on client stability. We’ve always said we want to make sure the build is stable, not only for Beta, but as we go. On top of this, we’ve got a team that has grown not only in volume but also in skill. Sometimes, as was the case this week, you find you’re dealing with issues from old code that you are now much more capable of improving.

We made a lot of progress over the past three days, but not quite enough to feel confident in a test this weekend. Be assured, we’ll have some testing next week where we’ll need our Backer’s help as we continue digging through crash logs and improving client stability. Let’s move into the week’s highlights!

1. WIP – Tech – Client Stability: Following our explosive 4th of July playtest, multiple members of the team came in after a long weekend with eyes towards improving client stability. Thank you to those testers who helped us track down bugs, and more importantly, client crashes. So what’s in the pot?

2. WIP – Tech – ‘Make’ Crafting Action: The first pass of the final stage of crafting is “Making” is in. Here you take existing “sub items” (such as alloys, and eventually other items) and use them to create a usable item (like a sword). Stats from sub items will be factored into newly created items which allows players to craft unique items. Other cool stuff on the horizon includes:

3. WIP – Tech – Continued Shadow Optimization: We’ve made multiple updates to shadows last week, which gave us far more detailed shadows. They also flicker less and look smoother. Currently, shadows are most expensive part of our rendering code.  George is currently making an optimization pass to continue to improve performance. Backers with older, less powerful video cards, don’t forget you can minimize the effect of the higher-definition shadows by changing your graphic settings in the game’s “options” menu. It can make a huge difference in your performance now!

4. WIP – Player Inventory UI: JB is working through the code review for AJ’s first major task since joining us- the inventory UI. This process has been more lengthy than usual, as JB is using this time to mentor AJ, which has the added benefit of helping one of our newest engineers grow his skillset.

5. WIP – Tech – Siege Engines Targetting: Matt is updating the targeting code to work with siege engines, so you can pick a target focus, like with most abilities.

7. WIP – Art – Animation: Sandra previously completed the second pass of a couple of dual wield swings with a club/torch and sword. This week she’s working through a piercing attack for the sword and deflect animations for both weapons. This will then be followed with improved shield animations.

8. WIP – Art – Animation: Scott began work this week on the scorpion siege engine animations. This will still need some tech work, but we’re making sure the art assets are available for the engineers ahead of time.

9. Art – Character and Armor Material Improvements: Jon took a quick detour this week to improve the look of the armor materials for better differentiation between material types, such as leather vs. cloth, or metal. Additionally, he completed a quick pass on character skin rough and specular values. This required only a quick audit of the “shininess” of materials in our PBR system. Because our lighting model is not yet final, and our artists are continually improving their craft, we’ll take these short detours to update old assets.

10. WIP – Art – Mines: Dionne began work late last week on assets that will be used to assemble a mine. This work will surely continue through next week as we hone in on a look and feel for these interiors and begin propping them out.

11. WIP – Art – Battlegroups UI: James completed a first pass styling of the Battlegroups UI. JB is currently working with him to review and audit for later integration.

You know, even though it’s only been three days for us here in the office, we still had eleven items! Pretty good for a short week. With that said, we don’t have as many images this week for the update, but I hope that what we do have gets your imaginations going! Following up last week’s material concept work from Michelle, we have renders of those material passes on the actual Viking portal model. (We’ll add the secondary items and VFX in game later.) First up, TDD and Viking treatments. 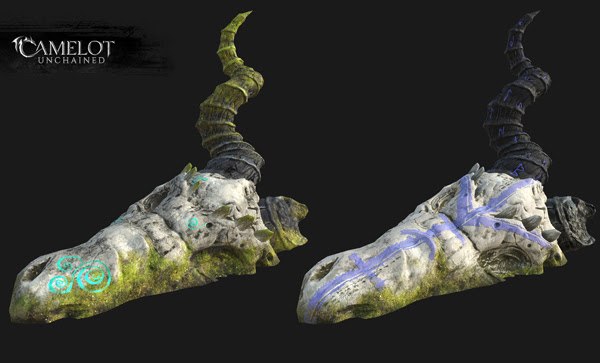 And next, the Arthurian and neutral variations. As a side note, I like that when we talked about these changes, Michelle continued to refer to this as “tagging” or “graffiti” that a realm might put on the object when they take over the territory. 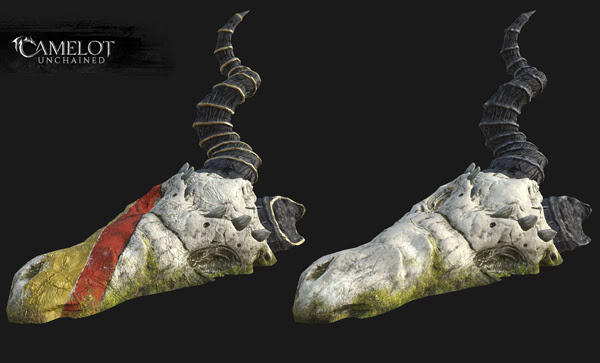 One thing we have not yet solved, is the look of the TDD portal statue. Last week, we showed a WIP model sketch of it from Jon. However none of us were really feeling it. It also didn’t match the more vertical look of the other two realm portals. Sometimes it takes figuring out what you don’t like to find out what will work best. This week, Michelle took an alternate model sketch Jon made and did a quick paint over in her stream. Even with these we weren’t quite feeling it. So next week, look for some new ideas for the TDD portal statue. Regardless, we wanted to include the below image as it truly is a sneak peek behind the process we go through. 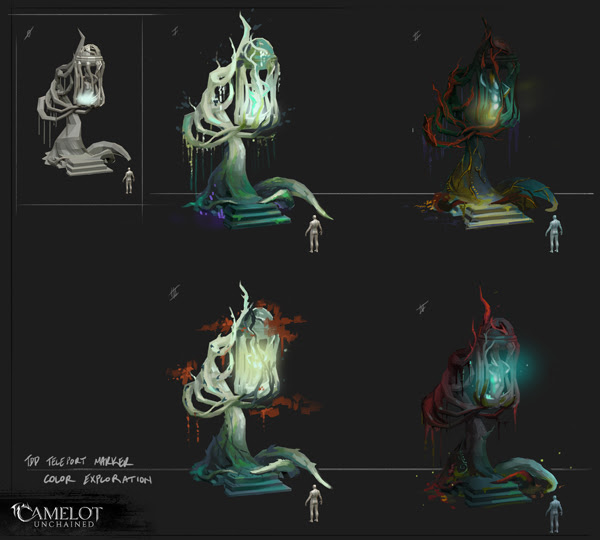 Next up, we have some work in progress shots of the mine assets from Dionne. This first pass is to figure out the scale of a basic tunnel with some minor propping to see if we like the feel of it. Once we sign off on this we can begin making all types of halls and rooms, and begin adding in some more unique hero pieces. We’ll have an in game shot next week with additional props and lighting. If you’d like to see the live stream of Dionne working on this today, you can catch that HERE.

That wraps things up for us here at CSE. Thanks for joining us on this journey. We appreciate your patience as we put in the collective effort to make a game we can all have fun killing each other in! And as a second reminder, no testing this weekend, but we expect plenty next week.