We’re all in for Bloom this weekend!

Whew! Another week done at CSE, and lots more accomplished. We have a lot to cover this week, especially since this is a User Stories update week, so let’s get started.

Pretty good list. Now for the really big list: our User Stories! Not as many completes as we usually have, but we also have some bigger systems in play right now, including animation. It’s still a more than decent list. We had 118 total completes, broken into 15 Old cards with 90 completes, and 2 New cards with 28 completes.

Old Cards:
As a Backer, I’d like to play in a procedurally-created environment. – Part Three.
Assets used in terrain mods display VFX and lights correctly. – Complete
Adjust how we calculate impostor groups so tall, skinny objects don’t always impostor when miles away. – Complete

As a Backer, I want to be able to own a plot of land and build within it. – First Pass
Revisit code and develop plan for data structure improvements to allow for CylinderMorphs. – Complete

As a Backer I’d like a patcher to not only update my game, but also give me the most important news and updates, get support, chat with the community and look awesome while doing it!
Adjust layouts of entry fields. – Complete
Tweak button and input field colors. – Complete
Sort character selection by most recently used. – Complete
Communicate Backer level when patcher is launched – Complete
Improve loading bar visuals, to better convey where in the install process someone is. – Complete

As a Beta 1 Backer, I want the sky lighting to use HDR
Refactoring existing sky rendering code. – Complete
Get sky values coming in HDR from the editor and rendering in HDR for the skydome, planets, and clouds. – Complete
Tweak values so everything is pretty. – Complete

As a Backer and Developer in B1, I’d like to see improvements in the visual quality of armor for CU.
Autumn Armor test:
Armor sub-part and modeling details concept art. – Complete
Concept art – helmet(s). – Complete

As a Backer in Beta 1, I’d like to play the Arthurian Physician class.
Generic bottle with color variations matching VFX. – Complete

Starting off today’s art-tastic part of the update: some concept art from the Realm of the Tuatha Dé Danann. Here’s some Fall Court armor. 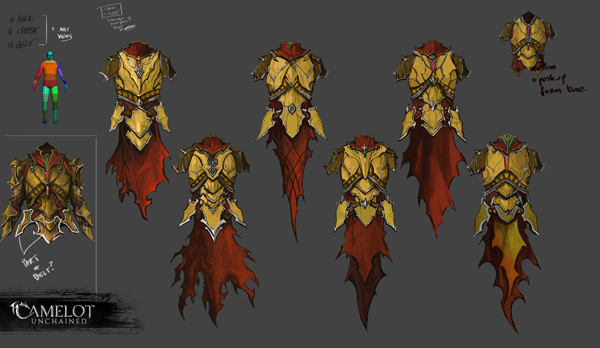 And here’s some matching helms. 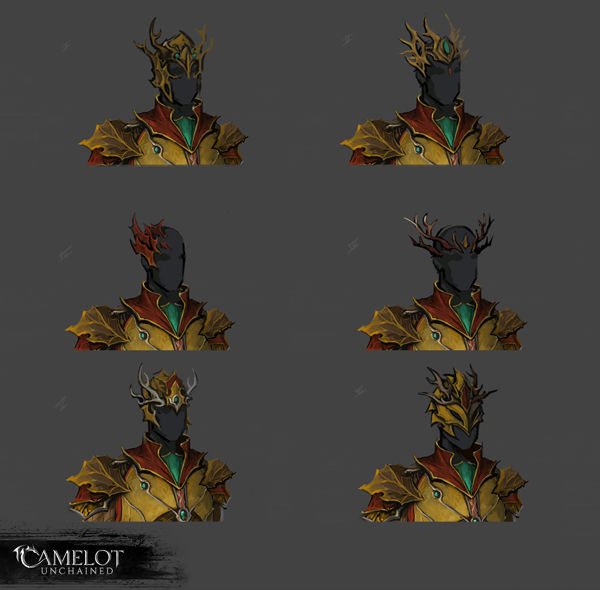 Moving from concept art, here’s some armor making its way through the development pipeline. 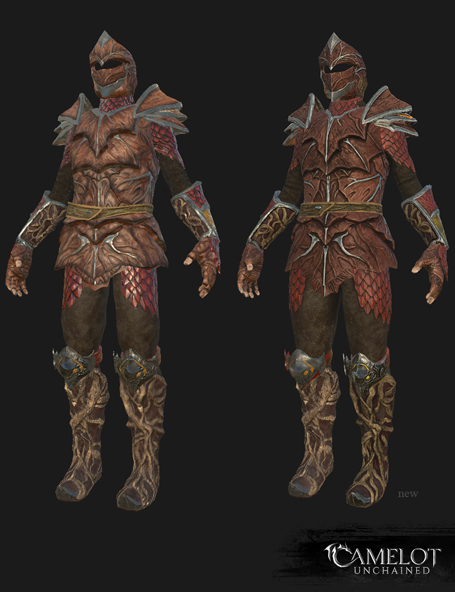 Here’s some “epic” axes from the three Realms. First, the TDD and Arthurian. 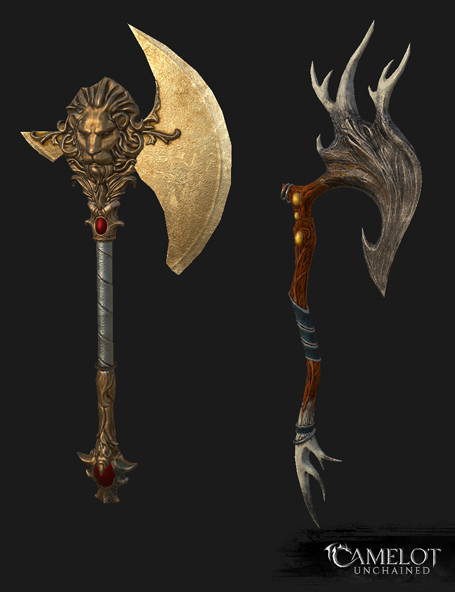 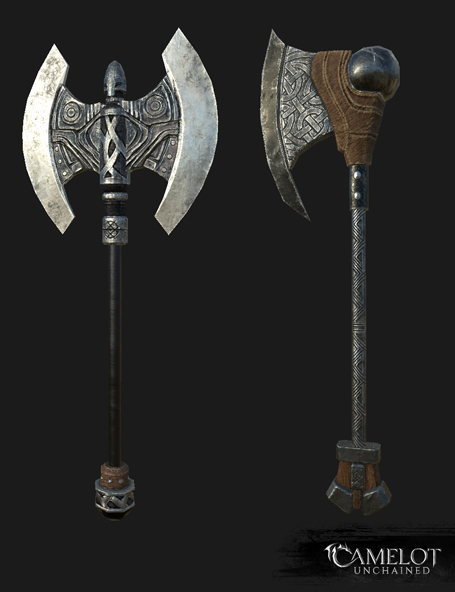 Next, how about some fine, but not epic, axes from the three Realms. First up, the Arthurians. 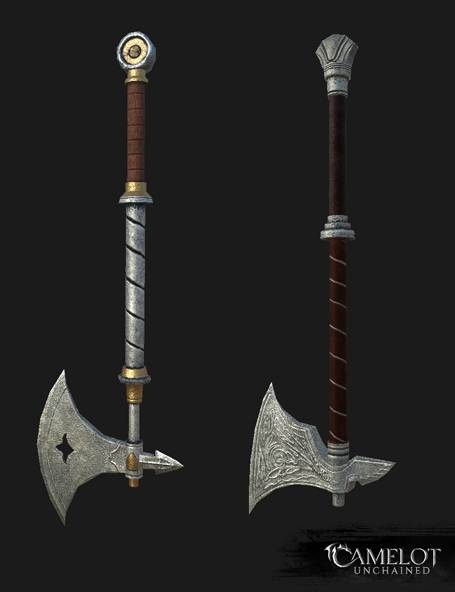 Now for the TDD. 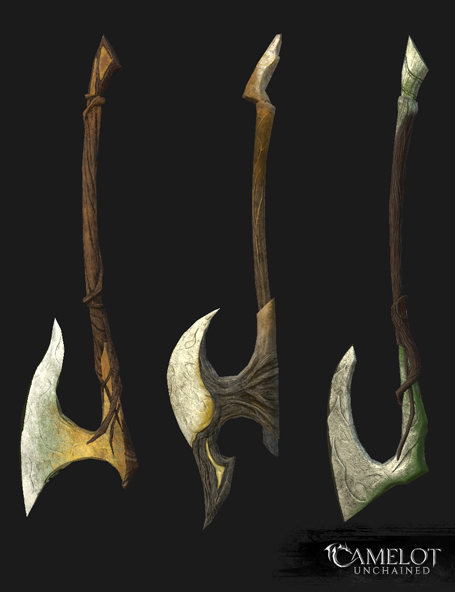 And finally, the Vikings. 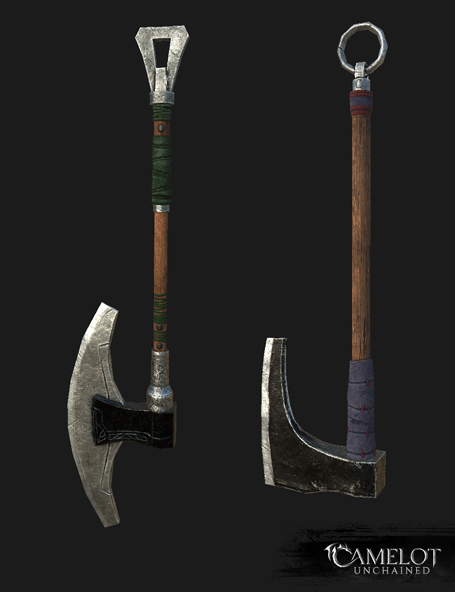 Here’s an animation series of shots. 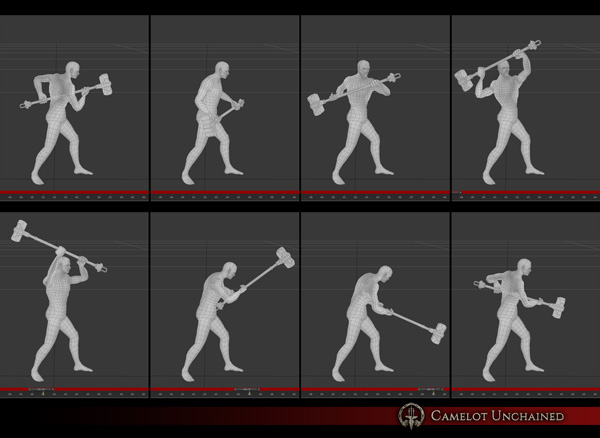 Now it’s time for some screenshots. This week, we added Bloom (https://en.wikipedia.org/wiki/Bloom_(shader_effect) and god rays to our engine. While there is still a lot of tweaking to be done, you can see the improvement from last week, let alone last year.

To showcase this week’s rendering changes, we’ve done a little searching in the autumn forest to find a break in the canopy highlighting this little sapling. Note the subtle light shafts breaking through the leaves and the bloom radiating off the sapling, but also softening the edges of the distant and close highlights and shadows. 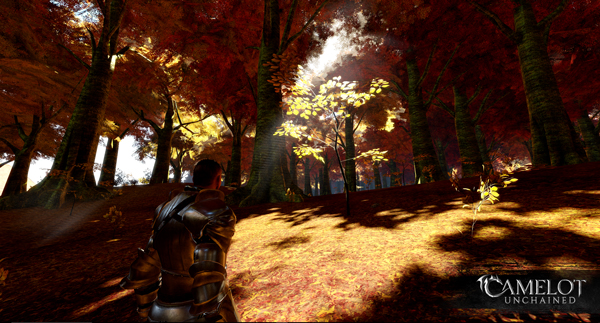 On the southern island we have a much greener palette to work with. Here we’re showcasing that golden hour all us humans love, right as the sun is setting. Note the subtle shafts breaking through the trees, but also the bloom softening the environment just beyond the trees. We’ve also introduced eye adjustment which can be seen here. We are simulating the opening and closing of a person’s iris, which occurs as you enter or exit dark and bright areas. The consequence, as your eye adjusts to the dark shadows you are in, is anything that is bright, such as the sky in this shot, will be slightly more blown out. This is all very much a work in progress, and I must preface that while it seems we are going for realism, we certainly plan to add more fantasy elements. Right now a more realistic world helps us tune all these lighting changes as we can gauge our work against what “feels” right, which is sometimes a hard thing to figure out. Trust us, we have a ton of knobs to tune now, so anyone jumping in will certainly find some great shots, and some not so great ones. Bear with us. Like we told you, it’s going to keep getting better. 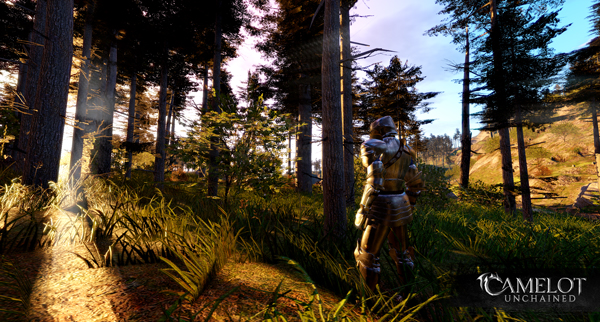 One thing I want to add in here is the updates we’ve done to our existing armor materials. Here’s a shot of the Arthurian heavy armor in the autumn forest. Note the subtle scratches in the armor, the rivets, the now straightened creases between plates. Also, note how the armor picks up the color from the environment which is part of our previous ambient lighting update. (Ignore that little black alpha issue on his belt buckle! Shh!) 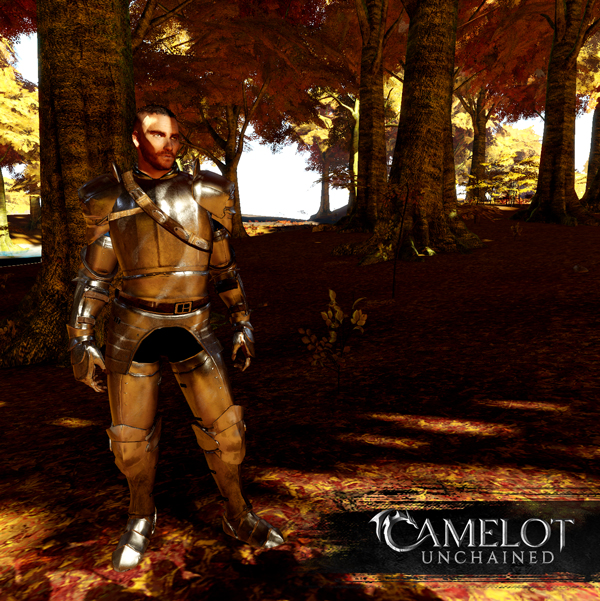 In other CSE-related news, as many of you know, one of our investors, Karen Lauder, has been involved in the entertainment industry for decades, dating back to her founding of Abandon Entertainment. As long-term Dark Age of Camelot players know, Abandon Entertainment invested in Mythic Entertainment, which allowed us to make that great game. Karen, and her daughters, have continued down that path. Her youngest daughter, Danielle, is a beautiful and talented young and aspiring actress, and her latest film, Charnel House, is now available on ITunes, here (https://itunes.apple.com/us/movie/the-charnel-house/id1163401550). It will soon be available on-demand on a number of cable systems, including, DIRECTV, DISH, COMCAST, TIME-WARNER, GOOGLE, XBOX, and many more in the weeks to come! So, if you are looking for an interesting and different horror movie, and some young and talented acting, you should check it out. And if you like it, please write a review. And as always, for the purposes of full disclosure, Karen was formerly Karen Jacobs, and she is my beloved sister, while Danielle is one of my equally adored nieces. I’ve been telling her for years that she is a special talent, and I believe this is one of the steps she will take on her way to fully display that talent.

In terms of this weekend’s test, we hit a last-minute snag with the chat server. The game is running fine, but for some reason the chat server picked this afternoon to act up. We are going to run a full Alpha, Beta 1, and IT test this weekend, but we don’t consider the build stable, so expect problems. OTOH, we want to show off how much the build has changed since the last time we opened it up for our Beta 1 folks. The big things to keep in mind are:

Some other notes for this weekend’s test:
The main changes we want to test are:

The secondary changes we want to test are:

What we want players to do:

Enjoy the weekend testing folks. Please post all bugs, comments, etc. here (https://forums.camelotunchained.com/topic/15348-alpha-beta-1-and-it-weekend-stability-test-nov-11th-already-in-progress/), but again, please know that this is an unstable build, so expect problems.